Montgomery County should do more for the homeless

New initiative not doing enough for panhandlers and homeless

On May 16, 2013, traffic accident killed panhandler Mary Josephine Fish in Wheaton. On Monday, Sept. 9, Montgomery County Executive Ike Leggett and County Council member George Leventhal met at an intersection near where the crash took place to announce a new countywide initiative to combat panhandling in the area. A tidy slogan "Give a Hand-Up, Not a Hand-Out" summed up the main principle of the initiative.

As part of the initiative, people can text a $5 donation to local nonprofit the Community Foundation for Montgomery County as opposed to giving beggars money directly. The donations will go to "grassroots efforts" to help those in need. A charitable idea, yet one that is ultimately about driving homeless from the area and is evidence of growing disdain for the homeless in Montgomery County.

This latest initiative is an attempt to make up for a downward trend in county funding to combat homelessness since the economic collapse in 2008. Between fiscal years 2009 and 2011, county expenditures for homeless issues dropped from $7.7 million to $5.7 million . As the county is able to do less and less for a growing population of the desperately poor —projected to be about 1.67 million nationwide by the end of 2013—initiatives that do less for the homeless will be more prevalent. 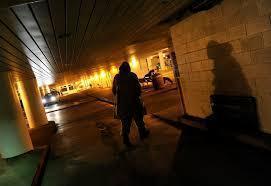 The county website asserts that "most panhandlers are not homeless" and that people come from out of county and state to collect money from passersby simply out of greed. The website goes on to say that most panhandlers are also addicted to substances like alcohol and drugs. These assertions are a sign of blatant fear mongering on the part of the county—attacking a group that cannot defend itself by portraying them as parasites. It makes little sense to claim that anyone would spend the money to come into the county daily just to beg on the streets for hours on end, braving weather, ennui and debasement just for pocket change. While it is true that many single homeless people have drug habits, it is not a leading cause of homelessness for those who are parts of homeless families. The county also seems to willingly downplay other factors that may play a role in someone's impoverished situation, like mental illness and physical disability. 39 percent of the homeless population report issues with mental health, and 66 percent report issues with both mental health and substance abuse. 26 percent report acute medical trauma like tuberculosis, while 46 percent report chronic health issues like diabetes or cancer. A full 40 percent of homeless men are American war veterans.

No one is denying that panhandling is an issue—the area outside Blair is a notable gathering place for panhandlers—but to cynically deride the panhandlers as greedy addicts and downplay the desperation of their situation will not encourage the public to donate and assist. This initiative is ostensibly designed to weed out those who do not need to panhandle and give support to those who actually need it. However, with a vast array of people and situations that make up the panhandling population, it's easy to imagine that many who are deserving of assistance will fall through the cracks without substantial state assistance

Until county leadership begins to see panhandlers as desperate people with few other alternatives as opposed to greedy drug addicts, nothing will actually be done about the homeless problem in the area. Text donations are a nice idea for people who want to contribute, but so far all the county has promised are vague, "grassroots" solutions. What is needed is swift and substantial government action; no matter what county leadership might say, a panhandling problem is a homeless problem and needs to be dealt with as such.