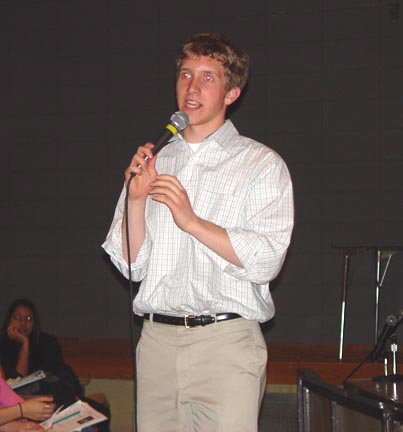 Last month, John Zachary, a senior at Walt Whitman High School participating in the PAC, legally filed the paperwork to create MCSGPAC with the Maryland State Board of Elections (MSBE). Law requires that PAC filers be registered voters before the time of the first election involving the organization.

MCSGPAC will support candidates by volunteering, rather than endorsing them financially, reducing the amount of paperwork at the MSBE. "By being able to mobilize so many students, this PAC serves as a gateway for candidates to access a vast source of human capital, which is one of the most important resources in any campaign," MCR-SGA Vice President Alexander Blocker, a MCSGPAC supporter, said. The group currently plans to call prospective voters and to help distribute literature about candidates, according to Elkind.

Elkind is very optimistic about the effects that MCSGPAC will have on the upcoming election. "We hope that the endorsement of the PAC will come to be sought after by local politicians," he said. "We could thus potentially influence who gets elected, which should translate into influence in the policy-making process after the campaign."

Members of MCSGPAC believe that students do not have enough voice in the political spectrum. "The whole point of this project is to make the student perspective more relevant in local politics," Blocker said. "Most students are too young to vote, but we don't have to be powerless."

Elkind hopes that the committee will increase the opportunities students have to play a roles in local politics. "Many of us have opinions on issues that we find important and on people who we would like to see in office," he said.

MCSGPAC is still under development; the decision-making board of students is not yet finalized. This board will meet later this year to decide the candidates MCSGPAC will support.

Elkind looks forward to the campaigning process MCSGPAC will be involved with in the upcoming months. "I'm very excited about it all," he said. "The message of this is that students are starting to step up."