Montgomery County Public Schools (MCPS) has the highest graduation rate out of the 50 largest school districts in the nation for the third year in a row, according to Education Week's 2011 Diplomas Count report released June 7. 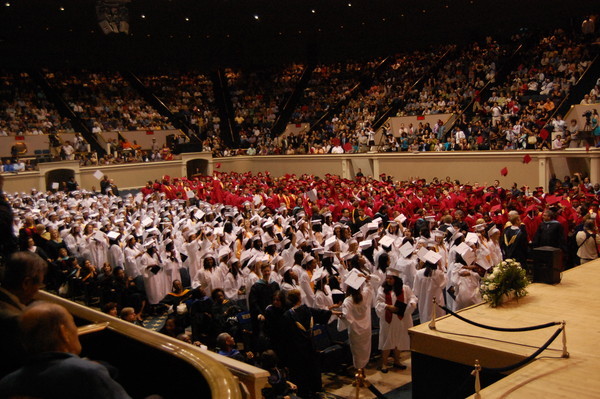 The graduation rate for the MCPS class of 2008 was 85.7 percent, up 2.6 percent from the previous year, according to the Diplomas Count report. The MCPS graduation rate is higher than both that of Maryland and the United States as a whole. These rates are 76.8 percent and 71.7 percent respectively. The annual report is based off of statistics compiled from the U.S. Department of Education's Common Core of Data (CCD) database.

The nation's graduation rate is at its highest since the 1980s. Other major developments cited in the report include gains in minority graduates, where graduation rates increased by two percent or more, narrowing the graduation gap between white and African-American students by two points in the past decade.

Christopher Barclay, Montgomery County Board of Education President, said the report recognizes the school district's dedication to help its students graduate, according to a press release put out by MCPS. "This year's Diplomas Count report once again shows that Montgomery County Public Schools is leading the nation in graduation," he said.

This statistic shows MCPS's commitment to preparing students for future endeavors, according to MCPS Superintendent Jerry Weast. "We not only are graduating the greatest percentage of students, but we are making sure they are prepared for college and the work place when they cross the stage to get their diploma," Weast said in the release.

Barclay attributed the county's high graduation rate to the region's devoted community. "Our staff is committed, our students are focused and our community is dedicated to providing a world-class education to all Montgomery County children," he said. Weast agreed with Barclay's statement and commended the MCPS staff for their hard work. "These results would not be possible without the outstanding effort put forward by the employees of MCPS, simply the best K-12 staff in the nation," he said.

As MCPS helps more students receive their diplomas, other area districts are exhibiting rises in graduation rates as well. Fairfax County ranked second place on the report with 85.1 percent graduation rate, Baltimore County came in fourth with 77.8 percent and Anne Arundel in sixth at 75.8 percent.

To calculate the graduation rates of the nation's 50 largest school districts, the respective states and the country, Diplomas Count used the Cumulative Promotion Index (CPI), which is the most accurate measure of student graduation rates, according to Education Week Research Associate Kacy Sellers. The CPI uses ratios to track whether students graduate on time. When the ratios are multiplied, the product is the graduation rate. "The CPI method represents the high school experience as a process rather than an event, capturing the four key steps a student must take in order to graduate… each of these individual components corresponds to a grade-promotion ratio," Sellers said.

For more information about the 2011 Diplomas Count report, visit the online copy of the report.