Kevin Moose is rarely seen standing still. His enthusiasm for life and learning is reflected in his rapid-fire speech as he walks the halls with colleagues or engages his students in the classroom.

Moose is the lead teacher of the International Studies academy and one of the four AP World History teachers at Blair. Moose, who grew up in Silver Spring and graduated from Blair in 1975, has been teaching at his home high school for the past seven years.

As a wrestler-turned-soldier-turned-teacher, Moose has led a unique life. He grew up in a family of nine children. "Growing up in a large family was crazy and fun," he remembers. As a parent of two young girls, Betty and Eleanor, Moose does not have to share his house with eight rambunctious kids anymore, but definitely enjoys playing with and reading to his girls. 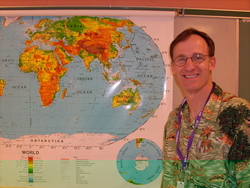 When he was in the seventh grade, Moose began wrestling. "It was a big part of my life at Blair," he says, remembering his wrestling coach as a father figure. During his time at Blair, he became Montgomery County champion twice in 1974 and 1975, in the 105 and 112-pound classes, respectively. His name can still be seen in the wrestling room, on the list of Blair's champion wrestlers. After graduating, Moose attended Notre Dame, dropping out after two years. He then got a Bachelor's degree in political science at George Washington University in 1980.

To pay for college, Moose joined the Army that year. "With nine kids, my parents really didn't have money for college," he says. Moose undertook a variety of tasks. "In Germany I served from 1981 to 1984 as an officer in an Air Defense Artillery unit with a mission to defend US airbases in the former West Germany from air attack," he says. "In 1985 to 1988 in Italy I commanded a nuclear missile site at a combined US-Italian NATO base."

It was in the Army that Moose got his first taste of teaching. "As I was in the Army, there were things I would read, about teaching, primarily," he recalls. He also took language lessons from an Army Defense school and was also exposed to different cultures in his time in Europe.

Although he was enjoying his time in the Army, in 1992, budget cuts forced the Army to downsize. "They wanted people to voluntarily resign, which I did," he says. "It was a tough call."

Back home, Moose decided to pursue teaching. But he admits that the job is not easy. "It has its good days and bad days," he remarks. "I won't be completely happy till every student comes to class."

His excitement for teaching is matched by his zeal for travel and experiencing different cultures. "I have a lot of passion for travel, politics and language," he says. "We need a whole generation of kids who understand culture and language."

His enthusiasm for different cultures and languages translates into his passion for his job. "I guess it is my dream job," he says. "It makes me learn all the time. You have to keep reading, have a fresh mind, have new ideas…it's hard work, but it keeps me energized and happy."

His current focus is getting students to take pride in their education. According to Moose, that is the essence – and the hardest part – of teaching. "The hard part is to get kids on board…So many kids nationwide are satisfied with less than their best," he says. "It's a big frustration. It drives me crazy. Teaching becomes un-fun."

From wrestling, to being a soldier, to teaching, to fatherhood, Moose has led a full and vivid life. It embodies the advice he gives his students and anyone willing to listen: "Never stop learning."