Admissions of black students to the three Magnet middle schools have doubled due to MCPS efforts over the last three years, according to MCPS Director of Enriched and Innovative Instruction Virginia Tucker. The acceptance figures have been released amid protests by the African American Parents of Magnet School Applicants (AAPMSA) that too few black students are being accepted into Magnet programs. 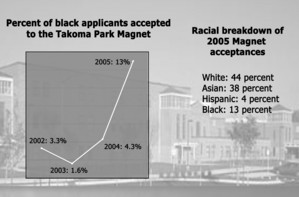 Photo:
Members of the AAPMSA lobbied the County in February to suspend all Magnet applications because too few black students were being admitted and stated at a March 23 Board of Education (BOE) meeting that the increases are encouraging but not completely satisfactory.

Changes in the program

These dramatic increases have resulted from MCPS efforts since 2002 to increase diversity in the Magnet programs by better equipping potential minority applicants for the challenges that the application process poses, said Tucker.

One of the primary reasons for the jump in black acceptances to Magnet programs is that this year's class of fifth-graders was the first class to experience the fully-revised elementary school curriculum, according to Tucker. The changes allowed students not necessarily identified as Gifted and Talented to access accelerated, enriched pathways, allowing them to take part in more MCPS advanced courses in elementary school.

In addition, this year was the first in which every elementary school in Montgomery County offered Math A, the first mathematics course at middle schools. These changes resulted in a fifth-grade class that was more qualified to compete for spots in the Magnet program, said Tucker.

Principals in elementary schools across the County were also asked to nominate students who would not normally apply to Magnet programs. The principals then worked with these students and their parents to ensure that they understood the application process and were ready for the entrance exams.

MCPS also contacted Dr. Donna Ford, the Betts Chair of Education and Human Development at Vanderbilt University and an expert on minority achievement in gifted programs, to help diversify the Magnet programs by advising MCPS on research and the types of assessments that give all applicants an equal chance to succeed.

As a result of Ford's suggestions, MCPS published several brochures and pamphlets informing parents about the Magnet programs, including a test preparation book to help students become acclimated with the format of Magnet entrance exams.

As part of the increased outreach, Tucker spoke before the National Association for the Advancement of Colored People to inform the organization about the timeline of the application process.

Such awareness initiatives are geared to help produce stronger Magnet candidates, said Tucker. "When you inform parents about the level of math a student should have achieved to apply, you're going to lose a lot of students in lower classes and gain a lot of students in higher classes,"? she said.

The screening procedure for the middle school Magnets, which Tucker said has not changed for over five years, involves examination of the following criteria: the teacher recommendations, grades, test scores, application essays, student motivation, participation in Free and Reduced Meals, geographical location and participation in the ESOL program.

Tucker said that these categories are used to compose a "complete picture"? of a prospective Magnet student so that students are given a full representation of their assets, and only the most able are accepted into the program. "The whole point is to put those overlapping pieces of information over one another and come out with a sense of whether or not the student is ready for the program,"? she said. "We know that there are certain things that can mask student strength."?

He also alleged that the teacher recommendations are the "most heavily weighted"? of the selection criteria, but refused to provide his source for this information. Tucker later denied this claim.

Broadwater told the BOE that while he is pleased with the increases in acceptances of black students, he still wants more changes to the selection process. "The unexamined admissions process has been flawed since the inception of the Magnet,"? he said.

Broadwater added that the AAPMSA has not decided whether or not it will push MCPS to use an affirmative action policy.

Magnet math teacher Eric Walstein said that the AAPMSA's requests reflect a fundamental misunderstanding of the learning process. "If [Magnet students] don't go back and study outside of class, they're never going to pass Magnet courses," he said. "That goes for all kids -- black, white, Asian, Hispanic...my name could be Socrates, and it wouldn't matter."

Ravi Umarji. Ravi is finally a senior in the Magnet. All you need to know about Ravi is that he's a huge Redskins fan (which, until last year, wasn't exactly pleasant). Of course, he's predicting a Super Bowl season next year. His favorite athlete is Lance Armstrong, … More »