During tough economic times, you'd expect the nation's politicians to come up with a solution to help get the country back on its feet, right? Well, this is Congress we're talking about here, so that's probably not going to happen.

Back in August, Congress formed a super-committee made up of three Republicans and three Democrats from both the House and the Senate. Its purpose was to find a way to deal with the nation's massive debt and to avoid the mandatory spending cuts that would come if an agreement wasn't reached about where to cut spending. Of course, after three months of deliberation, the super-committee still could not reach a compromise by the deadline and simply admitted defeat. 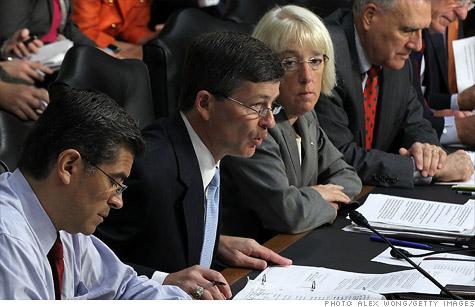 Photo: The super-committee attempted to reach an agreement about the debt.

Photo: The super-committee attempted to reach an agreement about the debt.

The whole thing played out like a movie with predictable characters and an even more predictable ending: Republicans didn't want to create any taxes that would affect the rich and the Democrats didn't want to cut healthcare for the elderly and poor. In true political fashion, everyone is blaming everyone else for the failure to reach a decision. The thing is, most Americans (and the rest of the world) aren't surprised by the super-committee's lack of purpose.

With the country so divided and politicians so unwilling to compromise, we've come to expect nothing less from Congress. When the super-committee was created, no one thought to themselves, "Gee this will be the solution to our debt crisis!" Even though they had three months or so to reach an agreement, it comes as no surprise that the two parties couldn't agree once again due to partisanship. Everything about the super-committee seems familiar; indecision and division is what we've been taught to expect from our country's leaders.

Now the country's just back where we started: an enormous debt, conflicting viewpoints and no one to take initiative and reach a compromise. Congress is supposed to lead the nation and mend our biggest problems, but they're too busy arguing with each other to make any real progress. Our legislative system needs to pull it together if they want to move the country in the right direction.