Bryan Moore was only twelve years old when he was diagnosed with Type 2 diabetes, caused by obesity and lack of exercise. Now a ninth grader, Moore has his name on a bill that aims to increase physical education requirements in school - including doubling high school requirements to two years.

As expected, the Maryland Senate shot down the bill this past spring for the fourth time, substituting for the first time a task force to investigate how feasible the bill's implementation would be. It's likely that the fate of this investigation will mirror the reasons the bill was amended in the first place: too much money, not enough time. 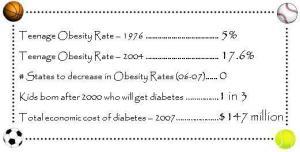 Yet the issue here is too important for lawmakers to use the excuse "we tried." They need to find a compromise that encourages schools to promote exercise and discourages a sedentary lifestyle for teenagers.

Action needs to be taken quickly, too, as the problem is not going away: obesity is rising at an alarming rate across all ages. The rate of teenage obesity is 17.6 percent, tripled since 1976, according to the Centers for Disease Control and Prevention (CDC). And according to Trust for America's Health, no state in America decreased in adult obesity rates from 2006 to 2007.

Another tangible indicator of obesity is Type 2 diabetes, the same obesity-induced disease Moore developed. According to the American Diabetes Association (ADA), one in three kids born after 2000 will develop Type 2 diabetes. Diabetes causes hundreds of thousands of deaths per year, and the disease is also a huge economic burden on health care or individuals - the total cost of diabetes in 2007 is estimated at $174 billion.

Physical education's link to turning this trend around has also been justified in research. A study conducted by Johns Hopkins Bloomberg School of Public Health revealed that participation in physical education five days a week decreases the chance that that child will become overweight as adult by 28 percent, with each individual weekday contributing five percent.

Despite the obvious benefits of the bill, two frightening acronyms – NCLB (No Child Left Behind) and AYP (Annual Yearly Progress) - make administrators uneasy and are causing doubts within the state, according to Cynthia Changuris, Blair's Physical Education Resource Teacher. Replacing a yearlong course with P.E. could make standards set by NCLB and AYP harder to meet, Changuris said. She also cited money as a roadblock, as the new requirements would call for more teachers.

A simple remedy for the situation is an exclusion rule. If this bill is targeted at students who are not exercising enough, then students who can prove that they are indeed exercising should be exempt from the second year of P.E. This compromise would tend to the students in need while keeping the number of additional classes and accompanying costs to a minimum.

Verification of student exercise then becomes an issue. However, this could be handled with a few bureaucratic rules. First, school sports are easily verified and should be encouraged. A single season could count for half a credit, the equivalent of a semester. In addition, school seasons that coincided with P.E. semesters would not count toward graduation.

Other school related exercise – after school intramural programs (such as the Blair Sports Academy), dance clubs, out-of-season training and more – would also be easily approved as suitable. For non-school exercise, a procedure similar to the one that verifies Student Service Learning (SSL) organizations could be used. This would promote organized exercise and simultaneously protect against deception.

For now, the debate is stalled until Nov. 1 of this year, when the Senate committee report is scheduled to be finished. "It's an uphill battle, but one worth fighting," Changuris said. At least that sounds like exercise.

For more information on Bryan Moore and his bill visit The Bryan Moore Student Health and Fitness Act of Maryland video.