Blair's Minority Outreach for Excellence (MORE) organization held its first two after school sessions helping 4th graders on their science projects at Piney Branch Elementary School on Feb. 5 and Feb. 12. Members plan to continue these weekly sessions from 3:30 p.m. to 4:30 p.m. to assist Piney Branch students with their projects for a science fair to be held May 23 at the school.

MORE's mission is to "encourage African-American and Hispanic students to succeed academically," according to the MORE web site. Though the group consists of mostly minority students in the Blair Magnet program, anyone who would like to help support the cause is encouraged to join, said senior Diego Ardila, president of MORE. The group was formed several years ago but this is the first year MORE is doing a big project to further its interests, according to Ardila.

"They [the MORE members] felt that one of the best things they could do would be to help students in the Blair cluster elementary schools," said Magnet teacher David Stein who cosponsors MORE along with Magnet Coordinator Dennis Heidler. Piney Branch was selected for its close proximity to Blair and its minority population, according to Ardila.

During the first session, 12 fourth graders were divided into groups of three among the four MORE members who went to Piney Branch. Students who already had testable hypotheses for a project were separated so that each group had at least one student with a working hypothesis, according to senior MORE member Jordan Turner. Each group then began helping out with the project of the student with an idea already. The projects, according to Turner, varied from working with batteries and electricity to parachutes and trebuchets. Similar efforts were continued during the second session. 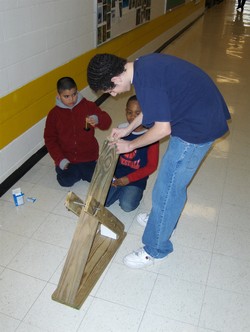 Although only MORE members were at the first session, MORE hopes to have Key Club members and possibly other volunteers come during the following weeks. The volunteers will help the fourth graders come up with testable questions if they have not done so already and then assist them with conducting the experiment. Ideally, there will be one volunteer per student, Turner said.

Currently, each group is kept to a maximum of three students even though there is a waiting list of students at Piney Branch who would like to attend the sessions. "If more volunteers come, they can allow more than 12 people to attend," Turner said. Even without new volunteers, MORE will be able to help additional students when the current students finish their projects.

During the science fair, MORE will be awarding its own prize - a telescope to a student who has attended at least one session of MORE. Other than the attendance requirement, there is no other criterion set out yet for the award. "We don't really have specific qualifications," said senior MORE member Vince Agard. "We're just going to make a judgment call based on who we think deserves it."

Stein appreciates their effort to reach out to the elementary school students, a project MORE has been planning all year. "It gets them involved in the community, it gets the name of their Club out there, it shows that Blair students are willing to give back, and the younger kids get help and guidance," he said.

Other Blair students are welcome to help out with the project for Student Service Learning hours. For more information, e-mail MORE here.