Get to know the Blair cheer team

Almost every day after school, you can find the Blair cheer team in the small gym. There, you’ll see them practicing stunts, sharpening up technique and making corrections for their competition tomorrow, Oct. 29. It’s long, arduous and hard work, but if the team wants to win, they have to give it their all.

The average Blazer sees the team perform at the pep rally and at football games. They see the impressive stunts and hear the enthusiastic shouts, but there is much more to cheer than meets the eye. What you see at football games is the product of hours of practice and skill development. It’s more than the uniform, more than stomping and clapping; it’s a tight-knit, hard-working community that is here to support and represent Blair.

While the cheer team performs weekly at sports games, it’s been months since the team has worked on any game-related routine. “We haven’t touched anything on game day since August,” senior cheer captain Rachael Young says. Instead, the team has been training for their upcoming competition.

Cheer practices almost every day of the week. The team starts with thirty minutes of conditioning starting at 3:30 p.m. They warm up, stretch, and go out for a run. After returning from conditioning, they haul mats from the weight room into the small gym and start rehearsing for competition. This is where the team works on their full-outs, full run throughs of a competition routine. After full-outs, they make corrections and adjustments. Practice ends at 6 p.m. 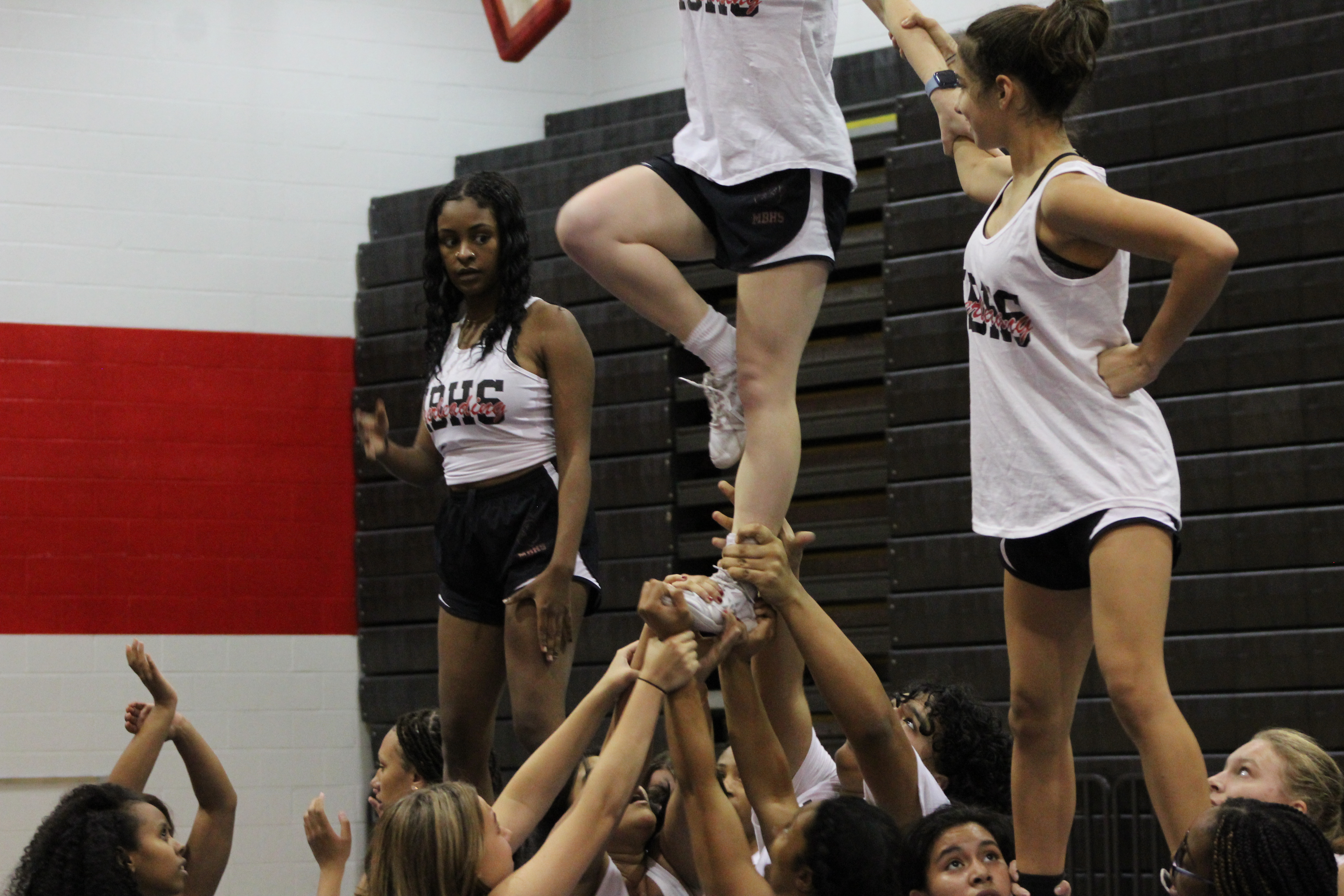 Photo: The cheer team assembles themselves in preparation for a stunt.

Photo: The cheer team assembles themselves in preparation for a stunt. Photo courtesy of Gabe Marra-Perrault.

In the first few months of school, cheer is especially time consuming. “My life is kind of cheer, especially during the fall season, because we have practice like every day of the week,” says junior Colette At-Same Ndong.

On top of the time commitment cheer requires, it’s also an active sport that can be very painful. Many cheerleading injuries are the result of stunting, the technical and athletic components that go into cheer. Stunts include pyramids, tumbling, group jumps, and standing up in the air. “I’ve had bruises… my lip [was] busted, my shoulder dislocated several times. Fingers get broken,” At-Same Ndong says. The team has to push through these injuries because there’s competition coming up soon and there’s no time to waste.

A misconception about cheer is that it does not take the same amount of effort other sports require. This is not the case. Behind every cheerleader thrown seemingly effortlessly into the air, there are hours of practice and attempts gone wrong. “It’s easy because we make it look easy,” junior Nitney Veopradith says.

Like any other sport, cheering requires a lot of strength. Not only physically, but also mentally. “You can have… mental blocks, which can stop you from doing a skill,” says At-Same Ndong. It takes a lot of internal and external fortitude to be a cheerleader.

Luckily, cheer is a team sport, and the cheerleaders aren’t on their own. “It’s a really supportive community,” sophomore Shayanna Rodriguez says. While it can be easy to get discouraged when a stunt falls or when a cheer goes wrong, the team has to push through it together. As much as cheer is strength based, it is also based around trust between teammates. “Not that I’m in cheer, it’s a team sport… so I’m focusing more on, like, making my team better rather than myself,” Young says.

This building of trust is particularly important when it comes to stunting. “The flyers have to trust the bases, and the bases have to trust the backspots,” sophomore Vivian Conde says. In cheer, flyers are the cheerleaders on top of the stunt, bases support the flyers, and backspots spot the stunt and assist the bases in holding up the flyers.” Each position has to connect and communicate with one another in order to successfully perform. The team needs to be confident in one another’s abilities and skill. As a result of this, and the amount of time the team spends together, they’ve formed a supportive, close knit community. “We called it the other day a sisterhood,” Young says. 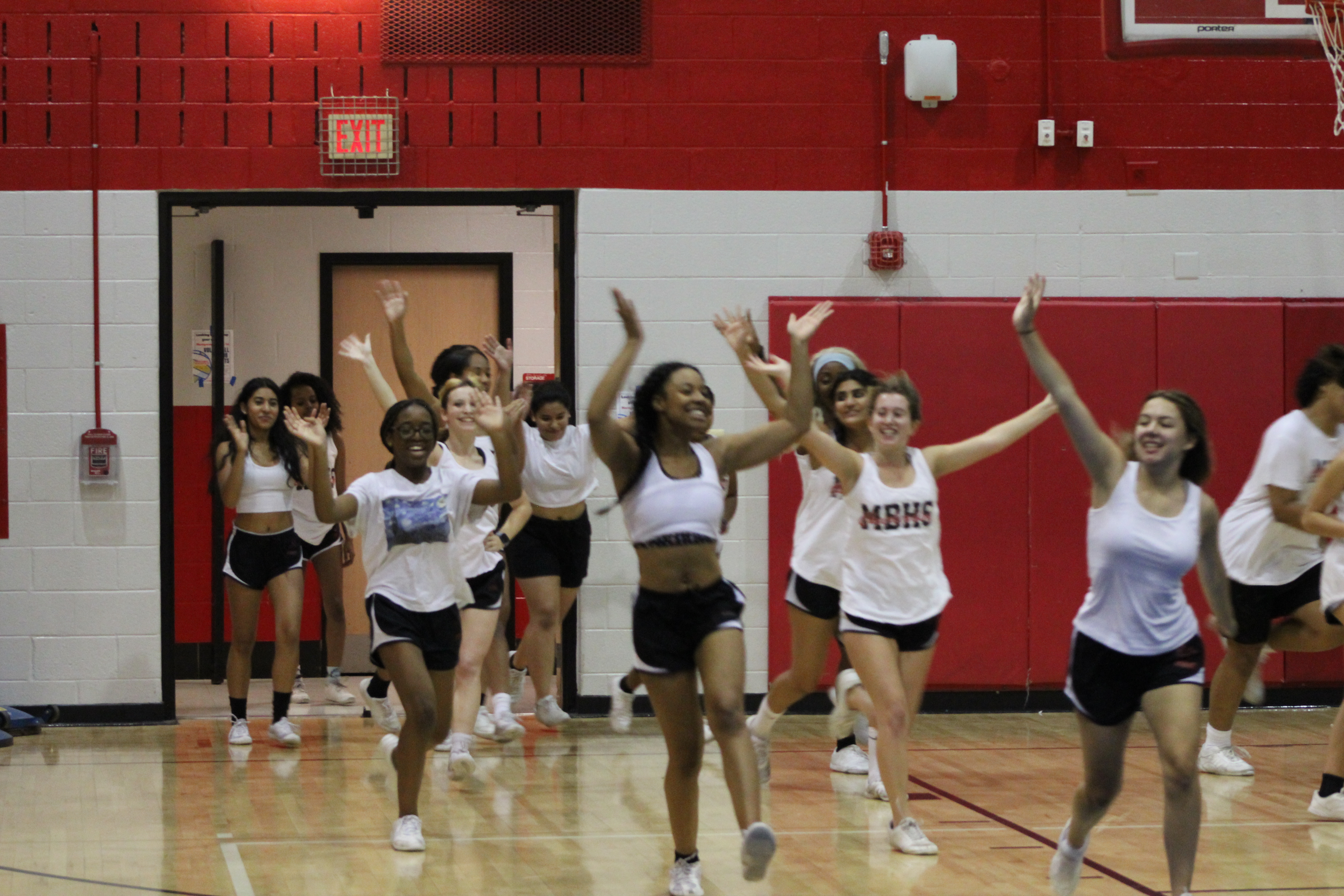 Photo: The cheer team rushes into the small gym, waving their hands in the air.

Photo: The cheer team rushes into the small gym, waving their hands in the air. Photo courtesy of Gabe Marra-Perrault.

As Blair is a big school, it can be hard to find a group to connect with. As sophomore Hannah Germain puts it, “being a cheerleader, you have a built in friend group.” The team constantly has to be connected and in tune with each other in and out of practice. “I can sit down with and have a conversation with anyone on the team. We’re all just so together,” junior Nina White says.

Blazers that are interested in cheer should not hesitate to try out. “People are always so afraid to try out. It is totally okay to try out. We need more… people on the team, not just girls,” White says. Men who cheer, especially, have been heavily stereotyped because cheer is traditionally seen as a feminine sport. There is no gender requirement in cheer. Blair’s cheer team welcomes everyone interested in trying out with open arms— underclassmen, non-female identifying people, everyone. It is a hard sport but it is ultimately very rewarding.

As competition looms, the cheer team is confident in their performance. “We got first place in the bag,” junior Dakato Cooper says. The amount of effort Blair has put into perfecting their routine is extremely impressive, they’re working hard to make everything look polished and ready. “The following weeks we’re going to really clean up our routines,” At-Same Ndong says.

The cheer competition will be held tomorrow at Blair at 10 a.m. “[Come and] support the cheerleaders, since we support y’all everyday,” Rodriguez says.