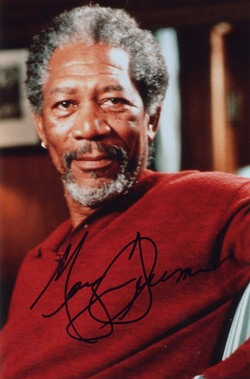 Actor Morgan Freeman has had an extremely successful career on Broadway, on television and in the movies. He is known as one of the most versatile actors in Hollywood, and audiences have come to learn that if it's Freeman, then it's going to be a stellar performance.

Freeman was born in 1937 in Memphis, Tennessee, and throughout his early years, Freeman had been enraptured by films and theatre; in fact, he said that theatre was the only subject that interested him in school. When Freeman was 18, he joined the Air Force as a mechanic because of the war films he had seen romanticizing life in the army. He learned soon after that the Air Force was not for him and quickly left to purse an acting career.

Freeman attended a community college in Los Angeles and was soon offered small roles in television. His acting career began on "The Electric Company," a television show that was the equivalent of "Sesame Street." His breakout role in a film was "Street Smart," which gained him his first Oscar nomination. From that point on, Freeman portrayed numerous characters in notable films including "Driving Miss Daisy," "Glory," "Unforgiven" and "The Shawshank Redemption."

Freeman has won one Golden Globe and been nominated for four Oscars. He is up for Best Supporting Oscar this year for his role in "Million Dollar Baby."

Information has been compiled from Yahoo Movies, amctv.com and IMDB.