"Morning Glory" is anything but glorious

A movie with potential is brought down by romantic comedy clichés 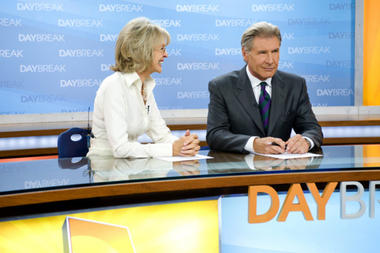 In the world of TV news, one rarely catches a glimpse of the people behind the cameras, and "Morning Glory" serves as a reminder of why this so rarely happens. Not only are the characters flat, but also their lives are monotonously predictable. The "Morning Glory" mediocre storyline brings down a potentially cute movie and turns it in to something completely forgettable.

Rachel McAdams stars as the irritatingly perky Becky Fuller, an overambitious executive producer who snags a job at Daybreak, a morning TV news show. Fuller is set on making this last-place program a frontrunner. After firing a smarmy co-host her first day on the job, Becky recruits veteran anchor Mike Pomeroy (Harrison Ford), only to learn that he's nearly impossible to work with. Shortly after, Fuller receives an ultimatum from her boss: She must drastically improve ratings in a month, or the show goes off the air. Unfortunately, Pomeroy consistently clashes with his diva co-host Ellen Peck (Diane Keaton) and is not shy about his unwavering contempt for fluffy news. Fuller's future at Daybreak appears bleak, but she is determined to plow ahead.

The mediocre dialogue, which is full of cheesy banter from Becky's mostly unfunny coworkers, doesn't save "Morning Glory's" uninspired plotline. The movie boasts a few laugh-out-loud moments, but too many jokes just fall flat.

Overall, McAdams is able to capture Fuller's stress and inner turmoil well. However, at times her character's awkward dialogue and endless head banging comes off as more annoying than cute.

And despite her reputation, seasoned actor Keaton shows little effort in "Morning Glory." Keaton's Peck is downright unlikeable at times; her behavior throughout the film is reminiscent of a child with a temper tantrum, and Peck's constant bickering with Pomeroy becomes tiring after a few scenes. Thankfully, Harrison Ford reminds us of why we loved him in the first place. His stony Pomeroy is the only character that experiences any real development. Ford successfully captures the only true tender moment in the film.

Although it has been marketed as a romantic comedy, the romance in "Morning Glory" feels under-emphasized, because Becky's love interest, Adam Bennett (Patrick Wilson), has no real connection to Daybreak or Becky's job. Aside from having once worked for Pomeroy, Bennett's appearances feel random and a bit forced. Every scene in which Becky and Adam are together ends up feeling too short, as Becky always seems to get called to work. Ultimately, the relationship unfolds in a hackneyed fashion, its ups and downs leaving no viewer surprised.

Director Roger Mitchell chooses to employ shaky, quick-moving shots to emphasize Becky's hectic life. It's certainly effective, but after a few control room scenes the shots only make viewers feel dizzy. The film's score is nothing groundbreaking, alternating between melancholy piano and crashing crescendos that try to force emotion.

"Morning Glory” is a clear step backward for screenwriter Aline McKenna, who previously penned "The Devil Wears Prada,” a spot-on example of a work-driven romantic comedy done right. The lackluster writing and unappealing characters keep "Morning Glory” from standing out among heaps of romantic comedies and recycled plotlines that hit theaters each year.

"Morning Glory” is rated PG-13 for some sexual content including dialogue, language and brief drug references. The movie runs for 102 minutes and is now playing in area theaters.