Mourning those so far yet so close

Sophomore Nicolette Harley was playing cards with her brother when she heard the news. "Did you hear what happened?" her mother asked a bemused Harley, who replied, "No, what?" Hesitantly, her mother told her the news - Harley's all-time favorite actor had just been found dead. After checking CNN for verification, she found out that on Jan. 22, Heath Ledger had passed away from an overdose of drugs, leaving fans across the world - including Harley - heartbroken.

"I just started freaking out," she says. "I started bawling." Harley wore black to school for the rest of the week. When other students questioned her choice of attire, she merely said, "Heath Ledger," but her answer was usually greeted with exasperated expressions. "People don't understand that you can have such a connection to someone you've never met," Harley says. 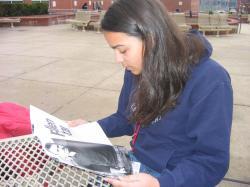 
And Harley wasn't the only one - thousands of teens across America sent instant messages, posted on message boards and created grievance groups on Facebook, exchanging condolences as if Ledger were a close friend.

Teen psyche supports an attachment to faraway celebrity figures and makes their deaths all the more real, according to Carolyn Barry, an associate professor of psychology at Loyola College. Barry reasons that the teenage demographic is the most interested in popular culture. "Research has documented that adolescents become oriented towards the larger peer and popular culture to a greater degree," Barry says, noting that the distinction is especially true between teens and elementary school-aged children.

Furthermore, the progression of technology has played an important factor in allowing teens to feel such a personal bond with their favorite celebrities, according to Barry. "Given the reality of living in an age of information technology, adolescents can – and many do – gather tremendous amounts of detail about celebrities," Barry says. "As a result, these…adolescents might perceive themselves as having formed a relationship with these celebrities, even if it is just a one-way relationship."

Harley, whose infatuation with Ledger was so strong that she desired to one day meet and work with him, says that she has at least five memberships in various Heath Ledger fan sites. Through these sites, she's gathered many facts about Ledger's personal life and thus finds coping much harder. "I don't know him personally but I know a part of him and that really kills me," she says. "A lot of people are like, 'You're just super-obsessed' or 'You're just a fan.' [But knowing] all of these things, you can sort of relate to him."

To cope on the day of Ledger's death, Harley popped in "10 Things I Hate About You," her favorite of his movies, but was unable to watch the film. The next day, she attempted to catch the news, but that didn't succeed either. "I thought I could handle it but I really couldn't," she says. 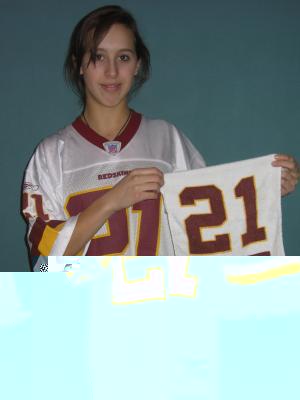 Photo: Scott endured a long line at the Redskins vs. Bills game to get a towel commemorating Taylor.

Photo: Scott endured a long line at the Redskins vs. Bills game to get a towel commemorating Taylor.


For senior Katie Scott, watching video after video on YouTube was the best way of dealing with the death of one of her favorite athletes. Scott mourned for Sean Taylor, former safety for the Washington Redskins, who was killed at his home by an armed intruder on Nov. 27, 2007. "I would just sit there and be like…I can't believe this is happening," Scott says.

Taylor passed away only one day after he was injured, so his death was a greater surprise to Scott. "The media made it seem like he was going be fine and all of a sudden he was dead," she says. "I was shocked. And then, of course, I was really upset." Scott says that she, her brother and her father cried as they watched the news.

The next Sunday, Scott and a group of her friends went to the Redskins home game against the Buffalo Bills. "I just so happened to have tickets to one Redskin game," Scott smiles ironically, "and that one game was the game after his death."

Scott recalls the intense atmosphere. "It was crazy," she says. "People everywhere had signs, shirts, posters, everything. I even saw huge Cowboys' – Redskins' rivals – fans cars with "RIP 21" painted on the windows." 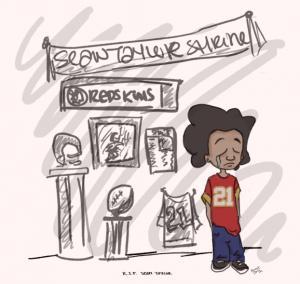 The Redskins lost a close game and Scott remembers how fans were completely in shock. "I wasn't crying but it was really upsetting…not only because of Sean Taylor's death but because we should have totally won that game. I just wanted to get out of there."

Youth and potential made both deaths especially tragic for fans. Ledger had an Oscar nomination under his belt and a slew of upcoming movies, and Taylor was core to the Redskins' defense. Both also left behind young daughters.

"Sean was known as being too aggressive but everyone was saying…that once he had his daughter, he changed and became more of a mature adult," Scott says. "That's just really what makes [his death] so unfortunate."