Much ado about Maya

Junior Maya Baum is on the verge of insanity. She is a mother, grieving over the loss of her child–in iambic pentameter. In front of a panel of judges, other contestants and an audience, Baum takes the stage of the New Shakespeare Theater in Washington, D.C. to reveal the tragic tale of Constance from Shakespeare's "King John" in a heartfelt monologue. After months of rehearsal and preparation, she is among 30 other talented high school students from Maryland, Virginia and Washington, D.C. competing in the District's National Shakespeare Competition.

The New Shakespeare Theater in Sidney Harmon Hall in D.C. housed the District's branch of the 2008 National Shakespeare Competition on March 10. Sponsored by the English Speaking Union (ESU), the competition features 2,000 students from 60 ESU branches who compete annually at the school, branch and national level for the first place prize of a full tuition scholarship to the British American Drama Academy's "Midsummer Conservatory Program" in Oxford, England. According to the ESU web site, their programs and the National Shakespeare Competition aim to instill and refine students' communication skills and appreciation of language and literature through the study of Shakespeare's works. Under the tutelage of English teacher Kelly O'Connor and husband John O'Connor, Baum not only represented Blair in the prestigious event this year, but she also made history as the first actress to perform on the stages of the Folger and New Shakespeare Theater on the same day.

Baum's journey to the spotlight at the New Shakespeare Theater began in another audition, but on a smaller scale. Kelly O'Connor judged the Blair competition, instructing each interested student to perform one of Shakespeare's monologues at his or her discretion.

Baum chose a monologue from the play "King John," and despite her past experience in performing Shakespeare's works in Lumina productions, was wary of this particular selection. Most recently appearing on the Blair stage in her comedic role as the twin Dromio in Blair's fall 2007 play, "A Comedy of Errors," Baum had experiences limited to humorous roles. Constance's mournful monologue was "out of my normal comfort zone of acting," Baum says.

Yet her independent preparation proved sufficient, as Kelly O'Connor selected Baum in February to advance to the rapidly approaching Shakespeare Competition. With one month before the branch competition, Baum had to prepare a monologue and one of Shakespeare's sonnets. Kelly O'Connor's task in coaching Baum on her monologue was made easier as she already knew the speech, so during their practices, O'Connor focused on "just refining things like projection…elongating vowels, and clarifying emotions and gestures," Kelly O'Connor says.

The sonnet threatened to be more of a challenge, but with former actor, director and longtime Shakespeare connoisseur John O'Connor's guidance combined with Baum's talent, bringing a contrasting sonnet to the stage became a manageable feat. John describes a sonnet as "a formal statement of what can be powerful emotion." In order to do justice to one of Shakespeare's sonnets, he says the actor or actress must convey the context and the character's emotions. He found in Baum a natural ease and knack for taking on a character in just a few lines. "[Maya] is very expressive. She is able to draw upon emotions and bring them out through facial, bodily and vocal [expression]," says O'Connor. 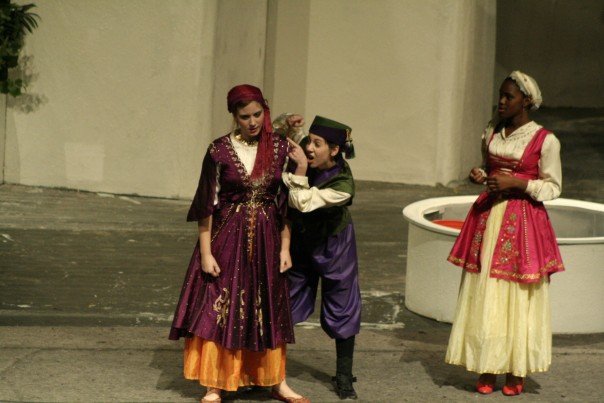 Photo: Baum in action in the fall play, "A Comedy of Errors." Picture courtesy of Maya Baum

Photo: Baum in action in the fall play, "A Comedy of Errors." Picture courtesy of Maya Baum

After one month's preparation with the O'Connor couple, Baum was ready to take the stage of the New Shakespeare theater, where she would unexpectedly also make history.

When the day of the competition arrived, Baum had more on her mind than her monologue and sonnet alone. First, Baum and other students from O'Connor's first semester Shakespeare by Oral Interpretations class performed at the Folger Shakespeare Library as a part of the Folger's 28th Annual Secondary School Festival.

Though her solo competition was not until the afternoon, Baum shone on stage with her classmates at the Folger, and was recognized for her performance as a brothel madame in a scene from "Pericles" with the "Excellence in Acting Award" that day.

When the curtains closed at the Folger, her classmates could take a breath of relief, but Baum left straightaway for the New Shakespeare Theater with John O'Connor, still on pins and needles. O'Connor's reassurance and talking with her competitors backstage helped sooth Baum's rattled nerves and mentally calm her for a well-prepared performance. "Talking to the other kids let go some of the stress," says Baum. "I realized that they are just students too and wasn't worried about the outcome of the competition anymore."

Under the spotlight of the New Shakespeare Theater, John O'Connor proudly says that she put forth her best performance. "She performed extremely well," says John O'Connor. "She showed real emotion and character." Though O'Connor insists that Baum performed her best even on a brand new, professional stage, Baum says that the theater was so big it was "harder to make a connection with the audience," a problem, she assures, will be remedied by experience.

Like every judged art form, acting is subjective, as the O'Connors kept reminding their pupil, and despite Baum's great performance, she was not selected in the top 10. Though he admits that he was disappointed, John O'Connor, who has experience judging Shakespeare competitions, helped Baum understand the personal taste and opinions that go into each judge's selections. Though Baum did not advance to the next round, John O'Connor thought that the junior was "unquestionably good enough [for the top 10]" and could have easily been in the top three.

Despite the competition's results, Baum gushes over her experience on the new stage in the Harmon Center. "I was pretty awestruck to be among the first to perform on the stage" she says. Perhaps even more impressive, John O'Connor concludes, is that Baum will remain the only actress to grace both the Folger and Shakespeare stages on the same day for quite sometime.


Josie Callahan. Josie Callahan is particularly opinionated despite her small appearance. She loves everything Irish and her life is consumed by her one true love- Irish Dancing- which suits her just fine. She also adores British accents, performing, theatre, tiaras, and sparkly dresses. Josie is particularly excited … More »