Much Ado for Blair theater as show time neared

Behind the curtains of Blair's fall production

For months the Blair theater program works relentlessly after school to put together the fall play: Shakespeare's 'Much Ado about Nothing'. The actors memorize lines and practice blocking, while stage crew builds the set and finds necessary props for the black box production. Finally, under the watchful eyes of directors Kelly and John O'Connor and assistant director, senior Brianna Moreno, the show comes together. But performance week is different for all involved in the production. As the first drawing of the curtain nears, nerves abound backstage. And after the final drawing of the curtain, pride and oftentimes tears are apparent in the days after performance week.

Excitement rises, but so does stress

"It's exciting but it's really stressful. Everything felt very fast-­paced and busy," junior Niarah Jackson says, recalling the hectic final week before the show. The atmosphere during that week has had an impact on everyone involved. It brought the actors closer together because of the mounting stress. They stayed at school later than usual for rehearsals. While some high schools stay really late in the final production days, the O'Connors don't hold students later than 8 o'clock. The students rely on each other during that final week to keep themselves sane. "We gave each other a lot of hugs," Jackson says, laughing. "Everyone was helpful with bringing food and helping out with homework in down time." 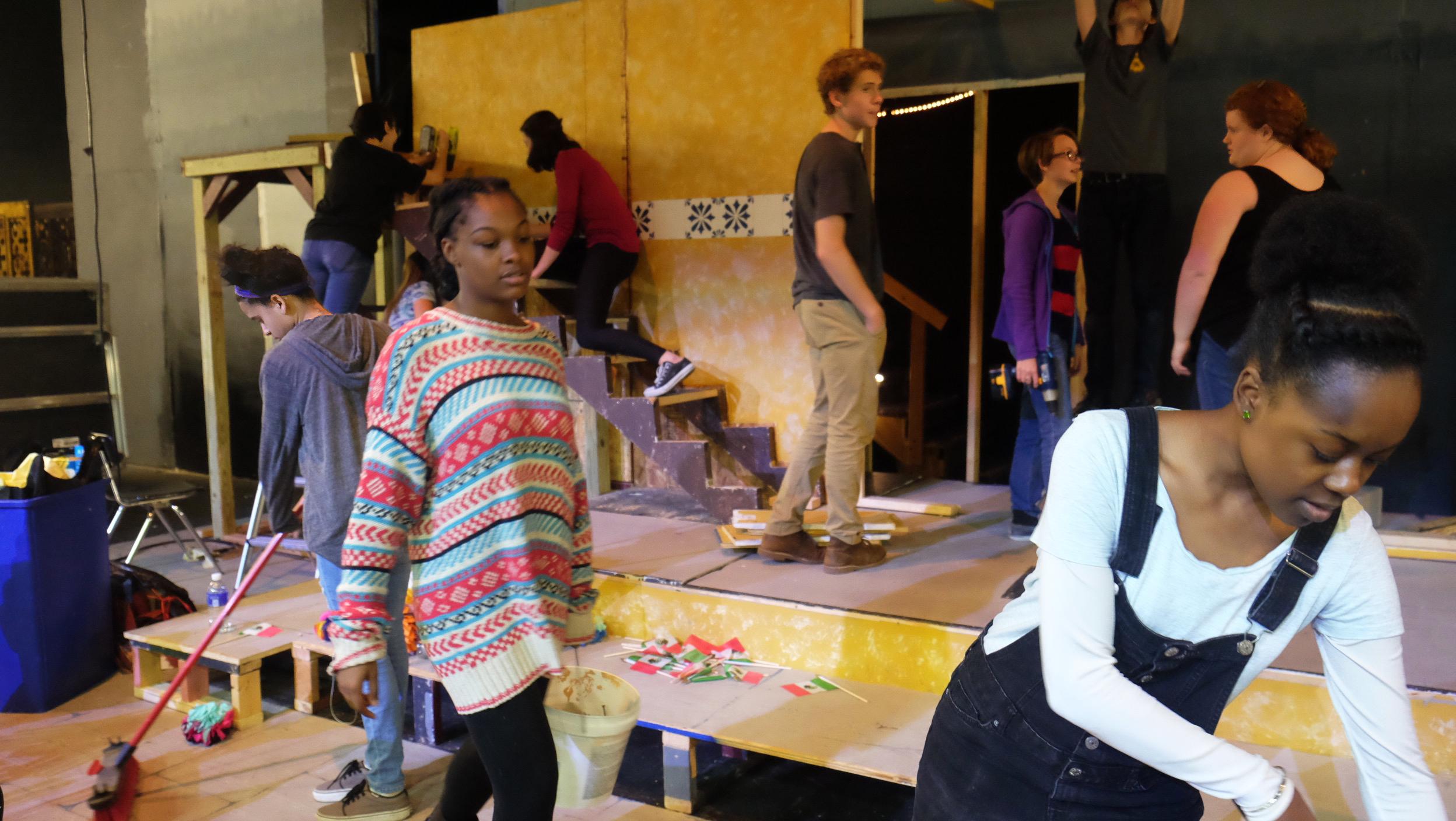 Photo: The stage crew and actors help to disassemble the set after the play.

The stage crew and actors help to disassemble the set after the play.  Photo courtesy of Luc Picone.

Kelly O'Connor teaches English and drama and has been running the Blair productions since 1998. She also participates in productions with local theater groups. Most of the shows she's directed have been crazy in their final week, but despite what her students say, she was surprised at the calmness of this year's fall show, Much Ado About Nothing. "This show was unusually very relaxed. One of my students even said, 'We're all really calm about this,' and even the stress once opening night hits and it all comes together, it's so exciting that you sort of forget all the turbulence that it took to get there," she says.

The Blair theater program had two months to prepare the entire show, which Moreno says is not a long time at all to have the actors, stage crew and blocking come together cohesively. But when the curtain came up, they had to be ready no matter what. Moreno saw a few mistakes here and there in the early shows, but she saw improvements as each performance went by. Kelly O'Connor knows that even though there's never much time with major productions like these, the work put forth is enough to run the play smoothly. "Even in professional theater people think 'If only we had one more week.' But the fact is, work expands to fill the time that you give it, so we are always ready," she says.

While only the actors are seen onstage, the stage crew makes the entire production run. Before and during the production they work nonstop to make the actors' jobs easier. While changing the scenes, the lighting crews and props all need to be in the right places at the right times. Clarissa Gideos is the assistant stage manager, and during the show she and her team need to move a box and put it in the middle of the blackbox between scenes while it's pitch black onstage. And that's just one of her tasks during the performance. "It takes a lot of focus and a lot of concentration to get everything right," Gideos says. 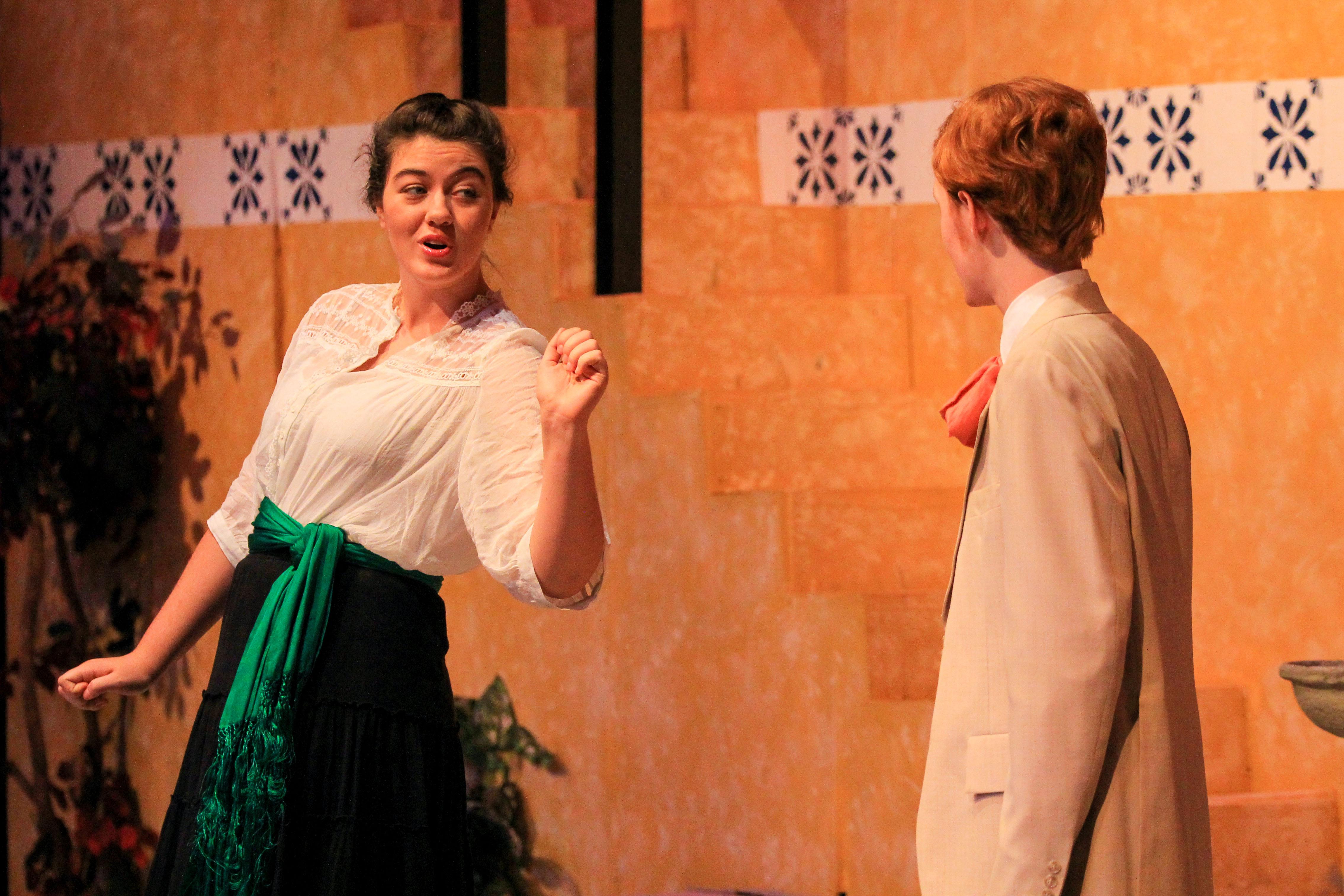 Photo: Before the show can be put on, months of preparation go in to be show-ready.

Before the show can be put on, months of preparation go in to be show-ready. Photo courtesy of Donald De Alwis.

During the performances, O'Connor likes to sit back and watch what her students have created, rather than sit in the wings barking cues. "People often ask me, 'Where are you when the play is going on? Are you backstage looking all nervous?'­ No, I'm sitting out front enjoying the show," O'Connor says.

After the performances, relief is a common feeling among the students, but going home after the bell feels unusual. "It's relieving to go home after school and have time for homework, but I missed seeing my friends after school and having something to do every day," Jackson says. As for O'Connor, she's already looking ahead to the spring musical and next fall's play. "The students are all crying and stuff, but I'm never sad when the show is over, nor am I relieved. I'm always thinking about the next one or two. For example, I already know what the fall play is going to be next year­ but I can't tell you that," she says smiling at the prospect of plays to come.