After the explosion of Deepwater Horizon's drilling rig, it seemed as though British Petroleum (BP) was sadly lacking a how-to manual on cleaning up the largest oil spill in history. Over the next three months, the company slowly worked its way through Plan A (blame faulty equipment), Plan B (apologize repeatedly) and Plan C (find a viable way to stopper the oil well). But rest assured – on the lucky 106th day after the spill, BP finally stumbled upon Plan D: mud. 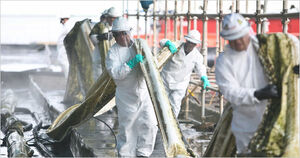 Plan D, formally dubbed "static kill," is meant to be a double blow, with engineers plugging both the top and bottom of the broken well to safeguard against more leakage. For eight hours on Tuesday, Aug. 3, a mixture of mud and cement was pumped into the blowout preventer on top of the wellhead and then injected into the lower part of the Macondo through a relief well. The mud, which weighs about 13 pounds per gallon, will bullhead the oil down into the rock and sediment beneath the original hole.

In a press release the following day, BP announced the operation had gone smoothly. It would seem that, at long last, BP executives and government officials could breathe a sigh of relief. Yet no one is patting the oil giant on the back for a job well done, and the Obama administration is still seething.

Though the "static kill" procedure was successful in permanently capping the well, there are still 4.9 billion barrels of oil floating around the Gulf of Mexico. According to government figures, about three-quarters of that oil has already been siphoned, burned or chemically cleared away by BP employees and volunteers. Disturbingly, the other quarter has simply disappeared.

This disappearing act has been attributed to natural processes such as evaporation and microbes in the water, though National Oceanic and Atmospheric Association (NOAA) scientists uphold that dispersed oil still poses a threat. Clean-up efforts around the coast will continue, and with the oil capped, surrounding ecosystems should improve over time.

All told, the company spent a whopping $3.5 billion on the Deepwater Horizon spill, and set aside another $32 billion for damage claims and settlements; yet the cost is nothing when compared to the hostile public outcry against BP's handling of the situation, which has consequently smashed the company's reputation into pieces.

The truth is, BP is mostly at fault for the spill; however, with such lax regulation on oil drilling, an episode like this was inevitable. Yes, BP's response efforts were laughable, and its lack of preparation was embarrassing. But the government is just as responsible for the mess, and should have been picking up the company's slack instead of pointing fingers.

To the next generation, this infamous spill will be a reminder of corporate greed running unchecked. For right now, it serves as a wake-up call for the American government and the oil industry.