Musician and former child soldier Emmanuel Jal came to speak at Blair last Tuesday in the auditorium during fourth period. He also held workshops during both sixth and eighth periods in the media center.

Jal was a child soldier for the Sudan People's Liberation Army during the Second Sudanese Civil War in 1983. He was seven years old when the war broke out. Jal was forced to train all day in the heat with little to no food. He told Blair students of an instance of hunger when he almost considered eating his friend. He reminded himself of his faith in his late mother and God to keep himself from getting discouraged. Now, he makes music, advocates for peace, acts and owns a business for healthy eating. 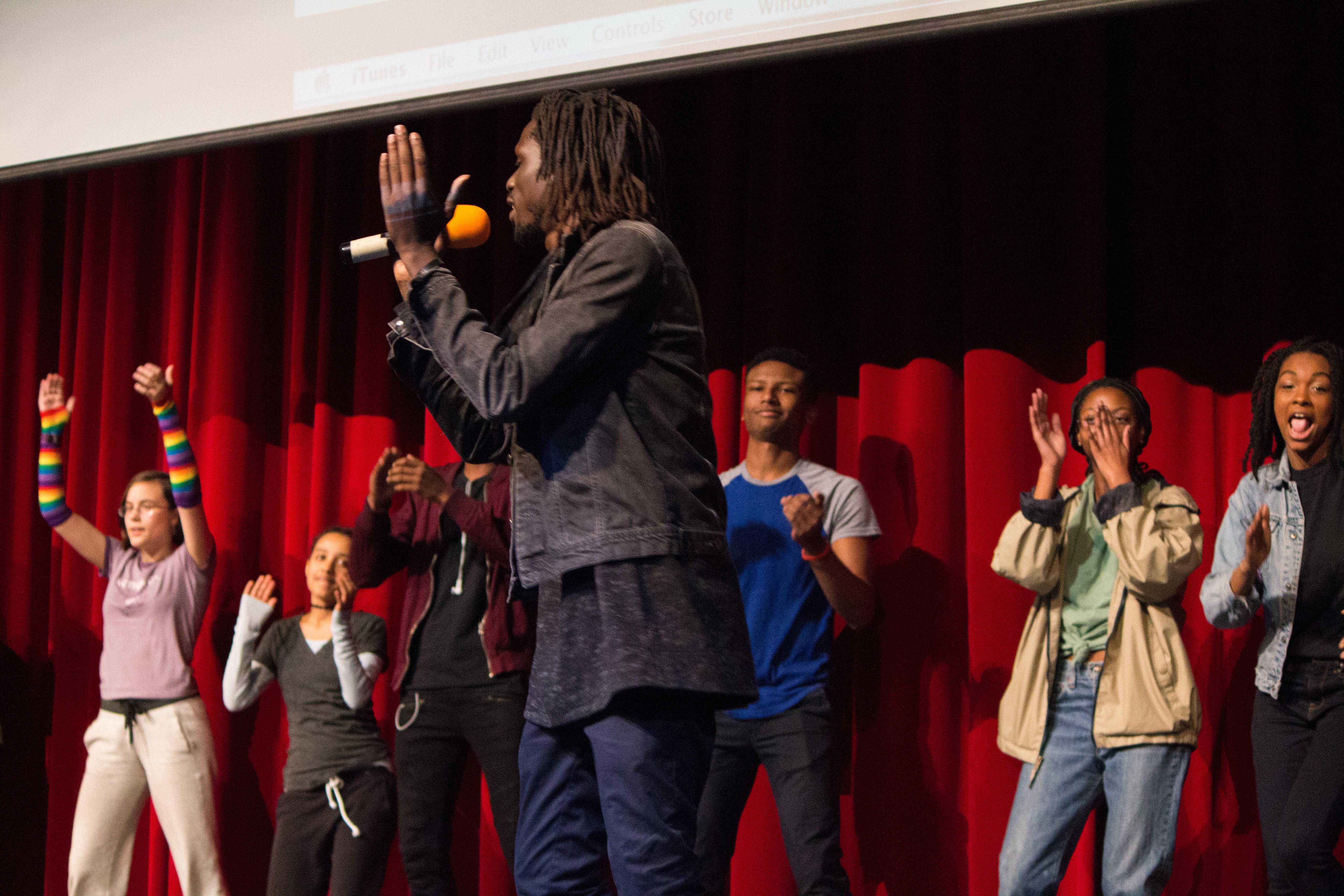 Photo: Jal invited students to dance with him up on stage during his closing out song.

Photo: Jal invited students to dance with him up on stage during his closing out song.

Jal began the assembly with his song "We Want Peace" as he walked through the audience. He began to speak of his experiences and give advice to students in the audience on how he overcame his trauma. Later, students were given an opportunity to ask questions and dance on stage with Jal.

Jal later held workshops for students from the assembly in the media center. He spoke about the programming of oneself, which to Jal meant finding something to believe in and creating values for oneself, and self-esteem. Senior Linie Nickel felt enlightened by his words. "Ever since the assembly, life has been just amazing. There are always going to be ups and downs, but I appreciate everything so much," Nickel said. He had students write ten supportive statements to themselves and told them to read aloud the statements in private and in the face of insult. It was a secret his mother told him when he was young, and he has practiced it ever since.

Social studies teacher Anne Manuel organized the event. She teaches Blair's International Human Rights elective and felt that Jal would provide personal insight for the students to accompany the class material. "For my human rights students, I just grab every opportunity to make what we study real for them. When I found out that he spoke at schools, I found that it would be really great for my students and make it more real," Manuel said. She also felt that his background would be inspirational for students to hear. "When I talked to him beforehand and found out more about his philosophy, I realized how this can really resonate with a lot of kids here," she said. 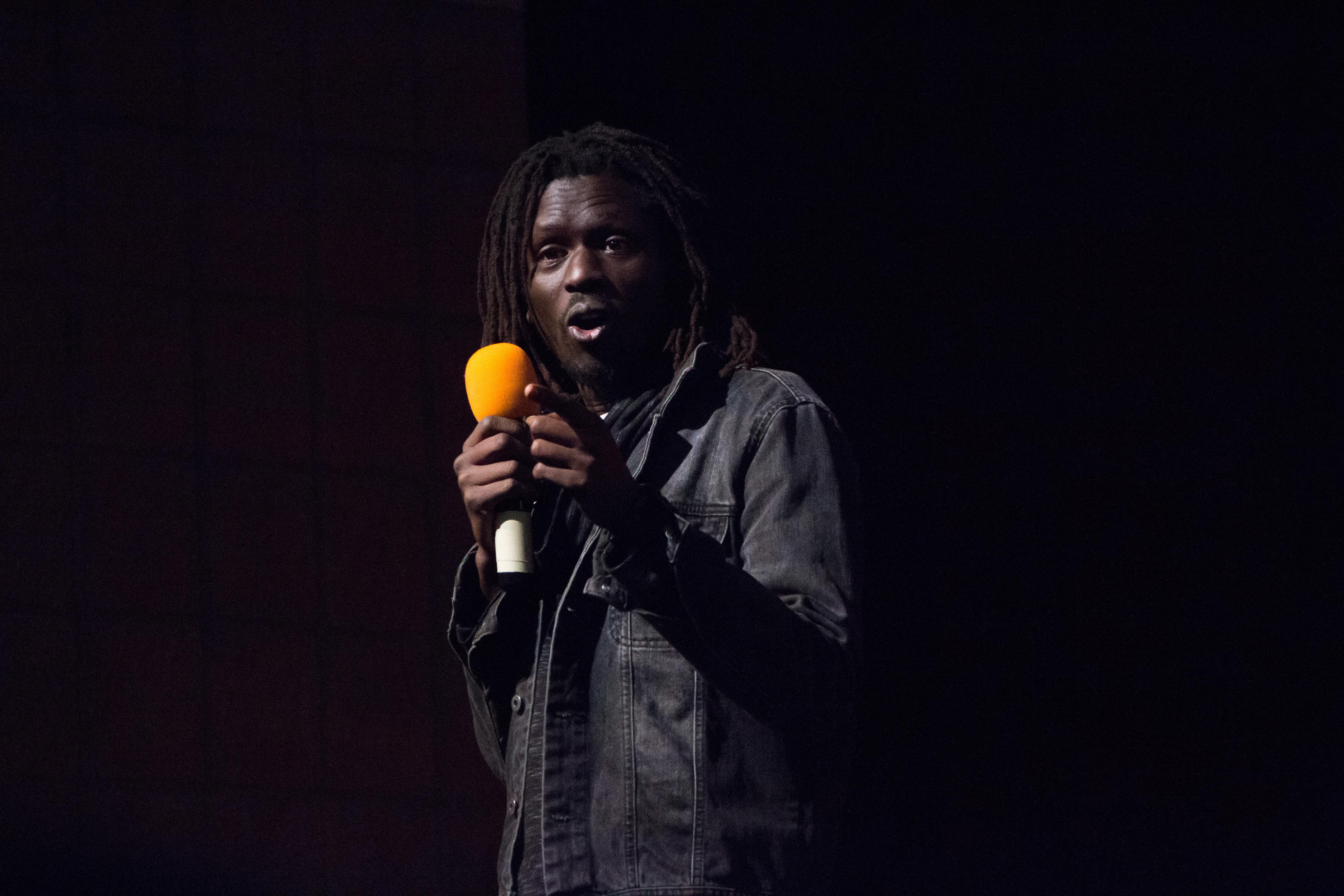 Photo: Musician Emmanuel Jal spoke to Blair students in an assembly during fourth period about his trauma as a child soldier, as well as advice to stay motivated.

Photo: Musician Emmanuel Jal spoke to Blair students in an assembly during fourth period about his trauma as a child soldier, as well as advice to stay motivated.

Manuel raised $1,305 through a GoFundMe account, as well as an additional $600 from the Blair Parent Teacher Student Association (PTSA) to be able to bring Jal to Blair.

Blair plans to invite Jal back next year for another concert to allow students for another opportunity to hear his story. Manuel looks forward to inviting more students to hear Jal speak, especially students who can benefit from listening to someone coming from trauma. She hopes that more students will come into the assembly knowing Jal's story and his music.

Jal later posted a video from the assembly and a message for Blair on his facebook page. "Full of JOY. Thank you so much Silver Springs for hosting me on my We Want Peace educational tour. My residency at your schools taught me a lot and the energy you gave was amazing. You are peace, you are joy and you are love. To all the incredible kids I met keep believing and focusing on your dreams," he wrote. Jal is in Canada as the next part of his tour.