Controversy, a history of injuries and disappointment. These qualities mar quarterback Donovan McNabb's recent years on the Philadelphia Eagles. However as one of the top 10 NFL quarterbacks in the franchise, McNabb is sure to bring at least some degree of expertise and offensive power to the Redskins, if only for a year. 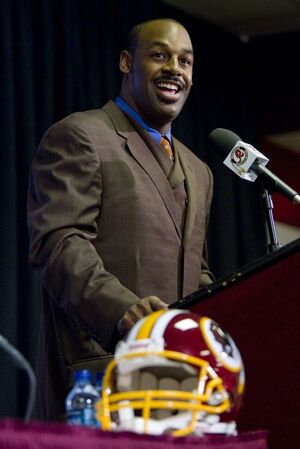 Washington's trade with Philadelphia for McNabb in exchange for two draft picks on April 4 seemed like the best way to initiate an overhaul of last year's Redskins offense. Keystone Washington quarterback Jason Campbell had started more games than any quarterback in over a decade, but suffered a blow under rotating coaches and a beleaguered offensive squad. With the third highest number of sacks last season, his staying power has been brought into question.

Campbell was not the only quarterback to receive dirty looks. McNabb's decline and drama-stirring tendencies, along with the emergence of Michael Vick and Kevin Kolb, ultimately led to his Philly demotion. No longer the shining Eagles star that led the NFC East team to the Super Bowl in 2004, McNabb experienced sports hernia and a nasty run-in with Terrell Owens in 2005, followed by a torn ACL in 2006 and missed playoffs in 2007. The next year, he watched the Ravens game from the bench and ended the 2009 season with a disappointing play against Dallas, costing the team a division title.

By March of this year, Eagles president Joe Banner and coach Andy Reid were dropping subtle hints that McNabb was up for grabs.

Though plagued with problems, the quarterback is still good for something, with Redskins coach Mike Shanahan quickly snatching up the NFC's 2004 offensive player of the year. During his 11-year Philadelphia career, McNabb blasted the Eagles' record in completions, pass attempts, yards, wins and touchdowns. He has the least interceptions per pass attempt of all time, according to ESPN, and the second highest touchdown-to-interception ratio in NFL history. The six-time pro-bowler also has five conference championships, four consecutive division titles and a Super Bowl performance to his name. 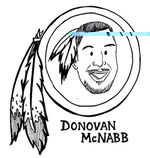 Photo:
With such a dependable starter on board, it seems Washington is set to remedy their horrifying 2009-10 record for good. But a "one-year rental" of McNabb describes the situation more realistically, according to the Bleacher Report, a sports website affiliated with CBS Sports. With the clock ticking on McNabb's contract, he will probably refuse to extend it when it expires at the end of the season, which could mean a player's strike is on the horizon, according to the National Football League Players' Association (NFLPA) Executive Director DeMaurice Smith. The Redskins could only reclaim McNabb if they bid highest, which is not certain, according to Smith.

McNabb's position as a starter also poses problems regarding potential Redskins backups, including the pitiable Rick Bartell and Rex Grossman. Inconsistent Grossman is probably the better of the dreary duo, but he has never pulled a rating over 74.8. Thus, the Washington team hopes their new recruit will play all 16 games this season. Yet this is unrealistic considering McNabb has only done so four of his 11 seasons. His history of injuries also makes a benchless season unlikely, as last year's holey Redskins offense offered no buffer for their quarterback. Going on 34 years old, McNabb may very well end the season injured again.

There is no doubt McNabb can bring Washington's offense to a whole new level, but his inconsistency on and off the field causes much concern. Despite this history, McNabb brings enthusiasm to the plate. "I'm really excited about my future with the Washington Redskins," he said in a statement on Saturday.

We can only hope Washington fans will be equally thrilled, as long as they look past his recent blunders and see the once-potent NFL superstar behind the façade.