Following the rover’s landing last month, the astrobiological project continues on its way as planned

On Feb. 18, NASA’s Perseverance rover touched down on Mars. The rover’s purpose is mostly to gather information and photos of potential past life on Mars, as well as collecting samples of Mars soil.

Since landing, Perseverance has since been exploring the vast landscape on Mars. It is currently joining the Curiosity rover, which landed on Mars back in 2012 and still continues gathering rock and soil samples. Perseverance’s build is similar to Curiosity’s, and has similar hardware and shape (both vaguely resemble small cars).

However, the main difference between Curiosity and Perseverance is that while Curiosity’s job was mostly to determine if Mars was inhabitable, Perseverance’s job is to find evidence of past life on the Red Planet. According to an article from NASA’s Mars Exploration Program website, “The rover will characterize the planet’s geology and past climate, pave the way for human exploration of the Red Planet, and be the first mission to collect and cache Martian rock and regolith.”

With seven different instruments designed to collect data and samples, Perseverance is the culmination of years of hard work and the end result of NASA’s Mars 2020 mission, with a hefty budget of $2.7 billion. One of the key features is Perseverance’s Hazard Cameras: shortly after landing, Perseverance’s first picture of Mars terrain was captured using one of these cameras and sent to Earth. 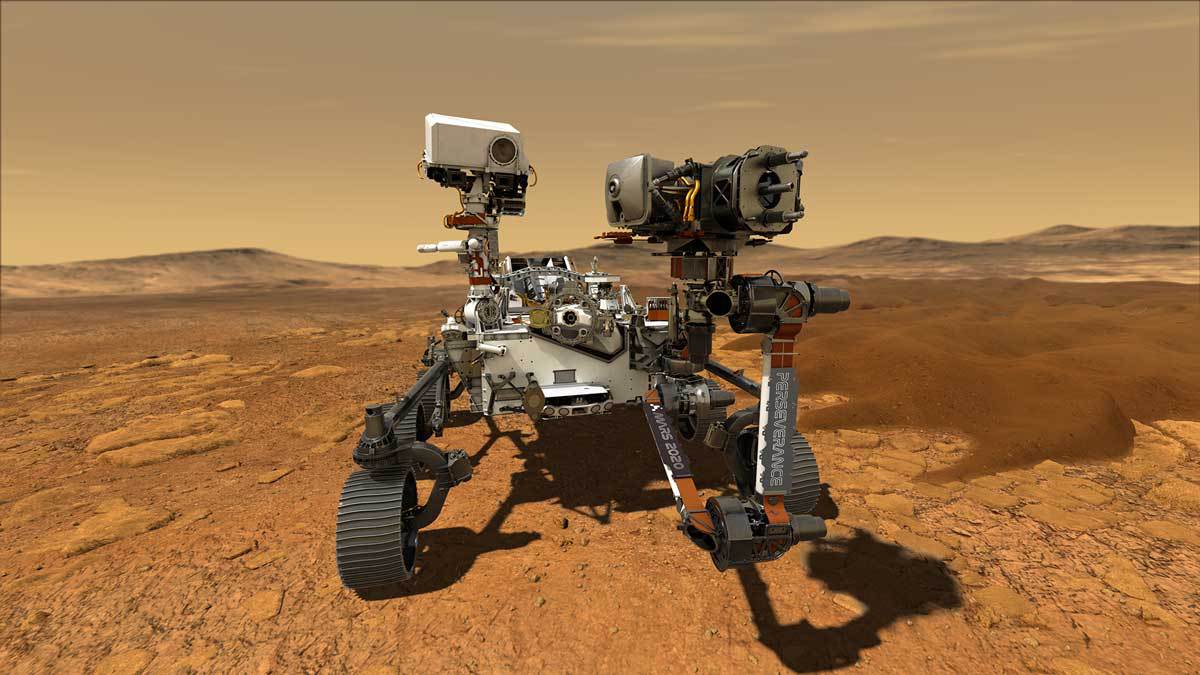 Photo: Perseverance, which landed on Feb. 18, roams across the Mars landscape collecting samples (courtesy of NASA)

Photo: Perseverance, which landed on Feb. 18, roams across the Mars landscape collecting samples (courtesy of NASA)

For about a week after landing, Perseverance went through a series of self-checks of its programs, instruments, and software. On Feb. 26, Perseverance conducted a major software update that changed its internal software from landing software to investigation software.

On March 2, NASA engineers operated Perseverance’s 7-foot-long robotic arm and ran some final checks to make sure it could operate smoothly. Robert Hogg, who is the Perseverance rover deputy mission manager, explained that this robotic arm was the key to investigating and gathering samples from Mars’ surface. “That’s the main tool the science team will use to do close-up examination of the geologic features of Jezero Crater, and then we’ll drill and sample the ones they find the most interesting,” Hogg explained.

Most recently, Perseverance conducted its first test drive on Mars on March 4. Two weeks after its landing, the rover finally left its landing site and drove about 21 feet away. This initial drive is usually the most nerve-wracking, since it’s the first time all of the rover’s parts are coming together, and one faulty part could obliterate $2.7 billion of hard work.

Fortunately, Perseverance (true to its name) pushed through rocky terrain and successfully completed its first drive. Anais Zarifian, who works as a mobility testbed engineer at NASA’s Jet Propulsion Lab, explained the significance of the successful drive. “The rover's six-wheel drive responded superbly. We are now confident our drive system is good to go, capable of taking us wherever the science leads us over the next two years,” Zarifian explained.

In the coming weeks, Perseverance will undergo more checks and tests before finally venturing out and joining Curiosity in the hunt for past Martian life. The mission will last at least one Mars year (about two Earth years) before coming back to Earth. It’s clear to see that NASA scientists and engineers worked extremely hard on Perseverance, and despite the difficulties that COVID-19 might’ve brought to their project, their hard work and perseverance is now paying off.