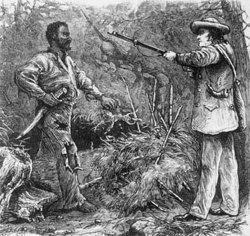 Photo: Nat Turner, slave, preacher and leader of a slave rebellion in Virginia in 1831.

Photo: Nat Turner, slave, preacher and leader of a slave rebellion in Virginia in 1831.

Nat Turner, a slave who lived in the 1800s, is one of the most famous historical black figures to date. Turner, who led a slave rebellion in Virginia in 1831, was a preacher who claimed to have visions from God. He was hailed as a prophet by many slaves of the time, especially because of the signs he believed God sent him and because of his uncanny knowledge of events that happened long before he was born.

Turner was born in 1800 on a plantation in Southampton, Virginia. Throughout his life, he had visions which he believed symbolized the work God wanted him to complete. In 1828, for instance, he had a vision where he fought against a great serpent, probably symbolizing white power. Thus, Turner resolved to head a rebellion when the right sign came, which it did in February of 1831, when the sun was eclipsed. He made plans with other slaves to start a rebellion and to kill as many whites as possible. In August of that year, the plan finally went underway. Turner had collected about 40 slaves who roamed from house to house, killing people as they slept.

Turner's, however, was short-lived. It lasted only one night, and the next day, as Turner's forces marched toward another town, they were met by the local militia. The black forces were killed or captured; Turner himself was hanged in November. All in all, 55 white people had been slaughtered, and 55 slaves were executed.

The insurrection had a wildfire effect among many whites of the time, however. Most were fearful of another such rebellion and imposed stricter rules for their slaves to follow. Some even succumbed to mob mentality and took out their anger on innocent slaves as part of an angry, white mob.

Information has been compiled from historybuff.com, answers.com and Africans in America.