This is not original reporting. All information has been compiled from The Washington Post, The New York Times and CNN. Silver Chips Online posts this news summary to provide a forum for discussion.

Washington, D.C.
Feb. 1 - The Obama administration asked Congress to increase education spending by about 7.5 percent for fiscal year 2011 for the restructuring of a test score-based rating system established under the No Child Left Behind Act of 2001. As a part of this initiative, the administration plans to substitute the Adequate Yearly Progress (AYP) rating system, which gives public schools a pass-fail achievement rating, with a fairer method for evaluating academic development. Specifically, the $3.5-billion budget increase will fund intervention in failing schools, teacher employment and training programs and the establishment of charter schools. The new $49.7-billion budget will also establish a third Race to the Top initiative, a competitive program that distributes grants to state education system for school improvement. 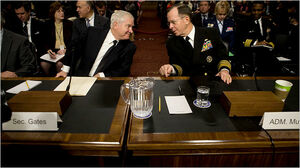 Feb. 3 - Admiral Mike Mullen and Defense Secretary Robert Gates testified in favor of ending the "Don't Ask, Don't Tell" policy before the Senate Armed Forces Committee. Established in 1994, the policy currently prohibits the disclosure of homosexuality among members of the U.S. military. While Mullen, the chairman of the Joint Chiefs of Staff, is adamant about repealing the policy, both he and Gates said the process will be gradual. The pair recommended a year-long Pentagon review, which will allow the Senate committee to consider the best way to execute changes before a formal repeal. Even then, abolishing the act may be difficult due to a lack of Republican support on the committee. In the meantime, Gates hopes to make the existing policy fairer and more lenient by eliminating a provision that calls for the dismissal of those whose sexual orientation is exposed by other service members.

Photo: Five people were killed and at least 12 were injured in a Feb. 7 gas explosion at a power plant in central Connecticut.

Photo: Five people were killed and at least 12 were injured in a Feb. 7 gas explosion at a power plant in central Connecticut. Photo courtesy of CNN.

Feb. 8 - After a power plant explosion killed five and injured 12 people on Sunday, Feb. 7, local Middletown officials prevented federal investigators from conducting a probe of the incident. The investigators were denied entrance and prohibited from interviewing witnesses because local police designated the plant a "crime scene." Daniel Horowitz, Director of Public Affairs at the U.S. Chemical Safety Board, declared that such reasoning did not justify the debarment. Middletown Police Chief Patrick McMahon acknowledged that investigators displayed a search warrant and should have been granted access because the plant may face criminal negligence charges. Middletown Mayor Sebastian Giuliano insisted that investigators would impede the clean-up process and should return for their inspection after the site had been cleared. But Horowitz countered that investigators must begin inspections in a timely manner to ensure accuracy.

Cheyenne, Wyo.
Feb. 14 - The Wyoming House of Representatives voted to introduce a bill spearheaded by Governor Dave Freudenthal (D-Wyo.) that establishes a tax on wind power production to create more revenue for the state. Freudenthal asserted that the wind energy industry deserves no special tax exemptions and that such a proposal could help diversify the state's tax base. Proposal supporters argued the tax could bring about $11.5 million yearly to the large wind power industry, which is already subsidized by the federal government. This tax goes against most state initiatives designed to increase financial incentives for "green energy" production. The head of the American Wind Energy Association, Denise Bode, said the tax may limit employment opportunities statewide.