This is not original reporting. All information has been compiled from The New York Times and The Washington Post. Silver Chips Online posts this news summary to provide a forum for discussion.

Photo: A passenger bound for the United States underwent a security check Monday at Benazir Bhutto Airport in Islamabad, Pakistan.

Jan. 4 - The Obama administration recently implemented increased security checks for airport passengers arriving from 14 foreign nations. The Transportation Security Administration and State Department agreed to narrow the list of countries due to a lack of comprehensive scanning technology. Counterterrorism officials explained that the extra inspections are a byproduct of increased anxiety over foreign extremists and inadequate airport security overseas. The examinations have included full-body pat downs and probing, according to several women who arrived at the John F. Kennedy International Airport from Qatar on Jan. 4.

St. Clairsville, Ohio
Jan. 7 - Ohio police chief Chad M. Dojack pleaded guilty to complicity charges for the burglary of a surrogate mother to Matthew Broderick and Sarah Jessica Parker. Fellow police chief Barry P. Carpenter was convicted of stealing items from the surrogate's home and planning to sell the stolen goods to tabloid publications. Dojack declared negligence, claiming he didn't realize the other officer had acted criminally. Carpenter must resign as chief, but Dojack hopes to keep his position. 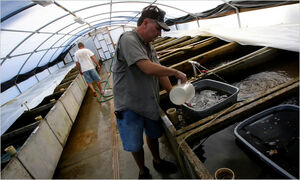 Photo: Ray Quillen, the owner of Urban Tropical, trying to save his angelfish by moving them inside.

Photo: Ray Quillen, the owner of Urban Tropical, trying to save his angelfish by moving them inside. Photo courtesy of New York Times.

Jan. 10 - The tropical fish industry, almost half of which is housed in the state of Florida, has suffered due to this year's extended cold period. Fish farmers across the state have estimated that more than 50 percent of this year's guppies will be lost due to unseasonal freezing temperatures. The economic deficit had already left the $45-million fish farming industry struggling to maintain the same levels of productivity. Recent water temperatures below 60 degrees Fahrenheit and air temperatures in the 20s have forced farmers to pump warm water, cover ponds with plastic and move fish indoors to salvage the rapidly declining populations.

Washington, D.C.
Jan. 16 - The U.S. State Department has decided to protest the Chinese government's underhanded attempts to steal intellectual property from the Gmail accounts of human rights activists in the U.S., China and Europe. On Tuesday, Google claimed its "corporate infrastructure" was hacked and that other large corporations were also targeted by Chinese espionage. In response, Google declared it will no longer censor searches from China and threatened to remove its search engine from the country if the Chinese government does not agree to have search filters eliminated. Human rights experts said that the U.S. government's protests may expedite the expansion of human rights overseas.