This is not original reporting. All information has been compiled from CNN, Reuters, The Washington Post and Associated Press. Silver Chips Online posts this news summary to provide readers with a forum for discussion. 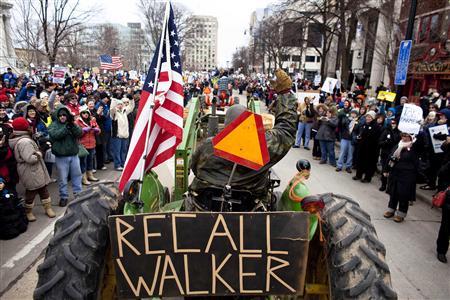 Photo: Protestors return to the streets of Madison to protest the anti-union bill signed Friday.

Photo: Protestors return to the streets of Madison to protest the anti-union bill signed Friday.

Mar. 12 – An estimated 100,000 protestors filled the streets of Madison Wisconsin to protest the bill signed by Governor Scott Walker on Friday that would eliminative collective bargaining rights for state workers. Republicans in the state senate passed the law despite the boycott by Democratic senators. Republicans assert that cutting bargaining rights is necessary to reduce the state budget deficit. The estimated number of protestors in Madison breaks the record set during protests against the Vietnam War.

Annapolis, MD
Mar. 11– After passing the state Senate, Maryland House of Delegate voted to place the bill to legalize gay marriage into committee. The bill will be out of discussion until at least January of next year. This defeat was a surprising shock to advocates of gay marriage, who had high hopes for passing the bill in Maryland, a state with historically liberal policies. After the bill swiftly passed the traditionally conservative-leaning senate, opposition to the bill rose and representatives began to feel more pressure from opposed constituents. 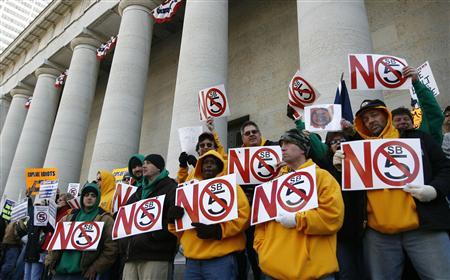 Photo: Ohio protestors stand on the steps of the state capitol.

Photo: Ohio protestors stand on the steps of the state capitol.

Mar. 1 – More than 8,000 protestors gathered outside the Ohio state capitol in opposition to a bill that would drastically cut union rights in the state. Proponents claim the bill is necessary to tackle an estimated $8 billion state budget gap. The bill would end the right to strike, drastically limit collective bargaining for state workers, and eliminate automatic pay increases for public employees. It would also limit local union's health insurance bargaining rights. Ohio has twice as many public sector union members as Wisconsin. The Ohio state senate passed the bill by a narrow margin on Mar. 2.

Madison, Wisconsin
Feb. 23 – Wisconsin Governor Scott Walker's conversation with a prank caller posing as conservative billionaire David Koch sparked outrage among thousands of Wisconsin protestors. Koch's Political Action Committee gave $43,000 to Walker's campaign. Walker admitted to caller, Ian Murphy, that he had hoped to lure the 14 Democratic Senators back to the capitol under the pretense of negotiation. He hoped to create a quorum in which the budget bill could pass without the votes from the Democrats. He also admitted that he thought about hiring agitators to bring an end to the two weeks of protests that have occurred in Madison.