This weekend was a rough start to the Nationals’ pennant race

The Washington Nationals are yet again in the depths of the pennant race in an attempt to make the 2019 Major League Baseball (MLB) playoffs. This weekend, they played a make-or-break series against the New York Mets. The Nationals, who are now six-and-a-half games out of first place in the National League East, lost the series 2-1 to the Mets, who have now won 15 of their last 17 games. 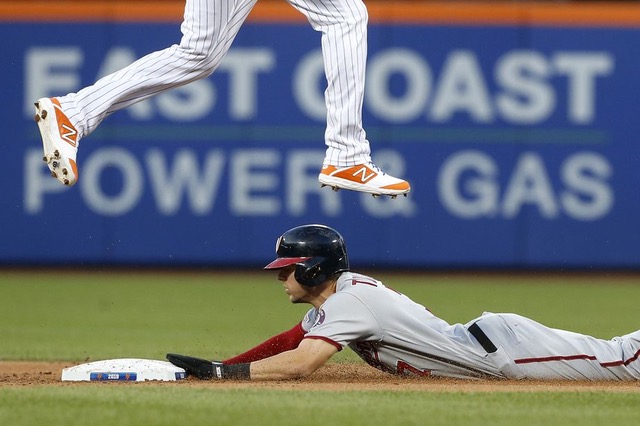 Photo: Trea Turner slides into second base during game two, where the Nationals lost 4-3 to the Mets. Courtesy of Jim McIsaac (Getty Images)

Photo: Trea Turner slides into second base during game two, where the Nationals lost 4-3 to the Mets. Courtesy of Jim McIsaac (Getty Images)

Going into the weekend, Nationals fans hoped that the series would give the team a strong start to their race for the playoffs. The Nationals had a horrible start to the season. With little offense and a failing bullpen, they were under .500 for quite some time. Though they sprung back and had a stellar June and July, closing their gap with the Atlanta Braves and taking the lead in the wild card race, this series was not all that the Nationals had hoped it would be.

The first two games were all-around disappointing for the Nationals. The Mets came back in the eighth and ninth respectively to win both games, but the Nationals avoided the sweep, pulling through with a 7-4 win on Sunday.

Although the fanbase has been energized, they are staying cautious. “I think that they have a good shot as long as everyone plays the way they have since the All Star break,” Blair junior Nick Layke said. “But injuries and closers could easily puts the Nats back in the situation they were in at the beginning of the season.”

This weekend's series especially highlighted the bullpen's weakness. The relievers faltered when the Nationals were already ahead, which has been one of the team’s biggest issues this season. In order to make the playoffs, the Nationals will need to win games like the ones that they lost to the Mets.

This series is the first of a long line of high-stakes games taking place over the next month as postseason approaches. The Nationals will be fighting to keep their spot as the wild card and potentially close the lead the Atlanta Braves hold in the division.