Nationals offseason moves hope to prove helpful down the stretch

The Washington Nationals have flipped a lot of players over the offseason after a disappointing finish last season, and getting toppled by the New York Mets for the National League East. With all these changes, General Manager Mike Rizzo and newly hired manager Dusty Baker will look to be much more competitive in what appears to be a two team race in the weak NL East.

The pitching staff should be as strong as ever. Despite the losses of Jordan Zimmermann and Doug Fister, the emergence of Joe Ross last year as a solid number four or five starter will nicely complement veterans Max Scherzer, Stephen Strasburg and Gio Gonzalez. The starters are set, but depth may become an issue, as signee Bronson Arroyo aggravated an injury. The Nats may instead rely on the highly touted prospect Lucas Giolito, the number three prospect in all of baseball according to MLB.com, 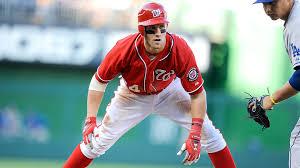 Photo: MVP Bryce Harper looks to lead the Nats back to the postseason.

Photo: MVP Bryce Harper looks to lead the Nats back to the postseason. Photo courtesy of Sporting News.

The bullpen acquisitions proved not to be as influential as anticipated. Yusmeiro Petit will begin the season as the long reliever along with hard-throwing Blake Treinen. The middle of the 'pen will be kept together by lefty specialist Oliver Perez and veteran signee Matt Belisle. The Nationals also have young flamethrower Trevor Gott up their sleeve for use in the back of the bullpen with Jonathan Papelbon and Felipe Rivero. By far the biggest need entering the offseason, the bullpen is now among the best in the National League. Led by veteran after veteran, the older guys should be great mentors for the young arms of Treinen, Rivero and Gott.

The Nats infield is strong. Anthony Rendon will be going back to third after a year of injury and playing second base. First baseman Ryan Zimmerman will try to get through the season injury-free, but backup Clint Robinson will be a staple in the lineup again this year on Zimmerman's many off days. Daniel Murphy is a solid option at second base, a career .288 hitter, but the money the Nats payed him thanks to his playoff home run streak may be a bit much.. However at shortstop, the position a bit murkier. Without Ian Desmond for the first time in a long time, they have three players who could take the spot. Young prospect Trea Turner, Danny Espinosa and Stephen Drew are all terrific fielders who are not known for their hitting. Espinosa, whose bat showed some signs of life last year, will be starting there as Turner was sent to the minors for some more seasoning. At just 22, Turner is one of the fastest players in the league, and will be up in the majors soon based on his raw skill alone. 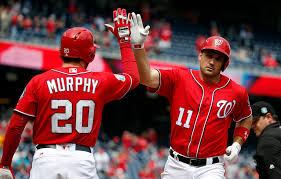 Photo: Offseason pickup Daniel Murphy and fan favorite Ryan Zimmerman will anchor the right side of the infield.

Photo: Offseason pickup Daniel Murphy and fan favorite Ryan Zimmerman will anchor the right side of the infield. Photo courtesy of Washington Post.

Bryce Harper will be out there every day alongside new centerfielder Ben Revere. The acquisition of Revere filled the void Denard Span left, and will be a staple atop the lineup thanks to his speed and ability to put the ball in play. They'll have Jayson Werth and Michael Taylor battle it out for the final spot. Taylor was impressive last year but still needs a lot of hitting help, and Werth is well beyond his prime.

At catcher they have Wilson Ramos again, who underwent eye surgery this offseason and was hitting well in the spring. Jose Lobaton will be catching for Gonzalez as usual and will fill in occasionally to give Ramos a day off.

Ideally, Turner and Giolito will stay in the minors until September call ups, but injuries could derail this as it did last year with Michael Taylor. Clint Robinson's bat would add another lefty off the bench and possibly more often with platoons with Zimmerman and Werth. This team looks great, and many of their hitters are coming off down years at the plate, which leaves hope for better seasons. In a perfect world, none of the Nats would get injured and the team would play as well as they stack up on paper, but if injuries come into play as they normally do in baseball, the Nats have depth on their bench and in the minors to supplement and make a deep playoff run a potential reality.