A neurotic ex-wife, her recently-released-from-jail-ex-husband and their son, split between the two. A jilted obsessed wife, a cheating husband with a quick temper and the investigator pulling them together. A trashy co-ed, several religious maniacs and a fugitive on the run from the law. At first glance, the cast of Carl Hiaasen's recently released novel "Nature Girl" appears to be compiled of characters from a soap opera, but soon they reveal themselves to be something far worse: not worth anyone's time. 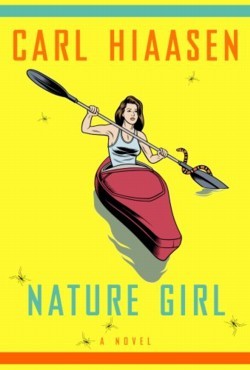 Carl Hiaasen began his career in Florida in the mid 70s writing investigative pieces for the Miami Herald, publishing his first book ("Tourist Season") in 1986. Since then, Hiaasen has penned eleven other adult novels and two young adult books, one of which was adapted to the silver screen in May 2006. But his characteristic style of eccentric heroes, dissatisfied heroines, corrupt officials and subtle environmental messages is lacking in "Nature Girl," making it one of his weakest novels yet.

"Nature Girl" begins in Florida at the dinner table Honey Santana, a single mom who also happens to be bipolar, when a telemarketer interrupts her meal. The caller, a cheating husband from Texas, Boyd Shreave, incites Honey's anger and changing both lives irreversibly. Pulled into the whirlpool of drama are Honey's son, ex-husband and mystery stalker and also Boyd's wife, mistress and a private investigator hired to expose his affair.

Shorter than his previous books, "Nature Girl" struggles to hold together a flimsy plot about a disorganized revenge plan gone wrong. Characters come and go at ease, adding little to the plot and at times detracting from the story's choppy flow. Rather than writing the novel in a typical order, the book's "climatic ending" begins halfway though and drags for 100 pages until the novel's inconclusive ending.

Furthermore, the characters introduced lack the appeal found in his previous novels. Honey is vindictive and irrational, inciting little sympathy, even when she is at the whim of the book's "bad guy," a stalker whose stereotypical behavior is so predictable that it is at times unintentionally humorous. Even minor characters fall short of expectations: the Texas mistress naturally is flighty and loose, while Honey's son is the epitome of pre-teen angst.

In some respects though, "Nature Girl" stands out from Hiaasen's previous novels in that he offers a refreshingly diverse slew of characters, a welcome change in his writing. Adding to the diversity, and subsequently the plot, is a young Seminole Native American named Sammy Tigertail, a relative of a key character in a previous Hiaasen book. The character's determination and personality is likeable, making him one of the few enjoyable parts of "Nature Girl."

Even though the characters, plot and story telling in "Nature Girl" falls short of previous Hiaasen standards, the dark humor and subtle messages makes the novel a fun and easy read for new fans with no expectations. But old fans, be advised: expect the worst; "Nature Girl" is naturally not worth their time.

"Nature Girl" was released mid November 2006 and is selling in local bookstores.