In the SSC, teams are composed of one current NBA player, one former NBA player and one WNBA player. The current NBA player on each team selects a former player and a WNBA player to join their squad. Two teams represent the Eastern Conference and two teams represent the Western Conference. Each team must make a total of six different shots in sequential order. The shots, in order, are as follows: a 10 foot bank shot, a 15 foot bank shot, an NBA three pointer, an 18 foot shot, another NBA three pointer and a half court shot. The two teams that do this the fastest advance to a final showdown. Here are the contestants.

This team features one of the two father-son combinations in the competition. Tim Hardaway Jr, the rookie out of Michigan, will team up with his father Tim Hardaway Sr. and WNBA stud Elena Delle Donne. When it comes to WNBA players, I give Delle Donne the edge over any of the three contestants. The rookie out of Delaware was the 4th leading scorer in the league in just her first season. She shot almost 44% from behind the three point line and about 43% overall. Tim Hardaway Jr. however, is one of the weaker NBA players in the contest. As a rookie for the Knicks this year, he has been a role player. Don't expect this team to make it out of the first round. 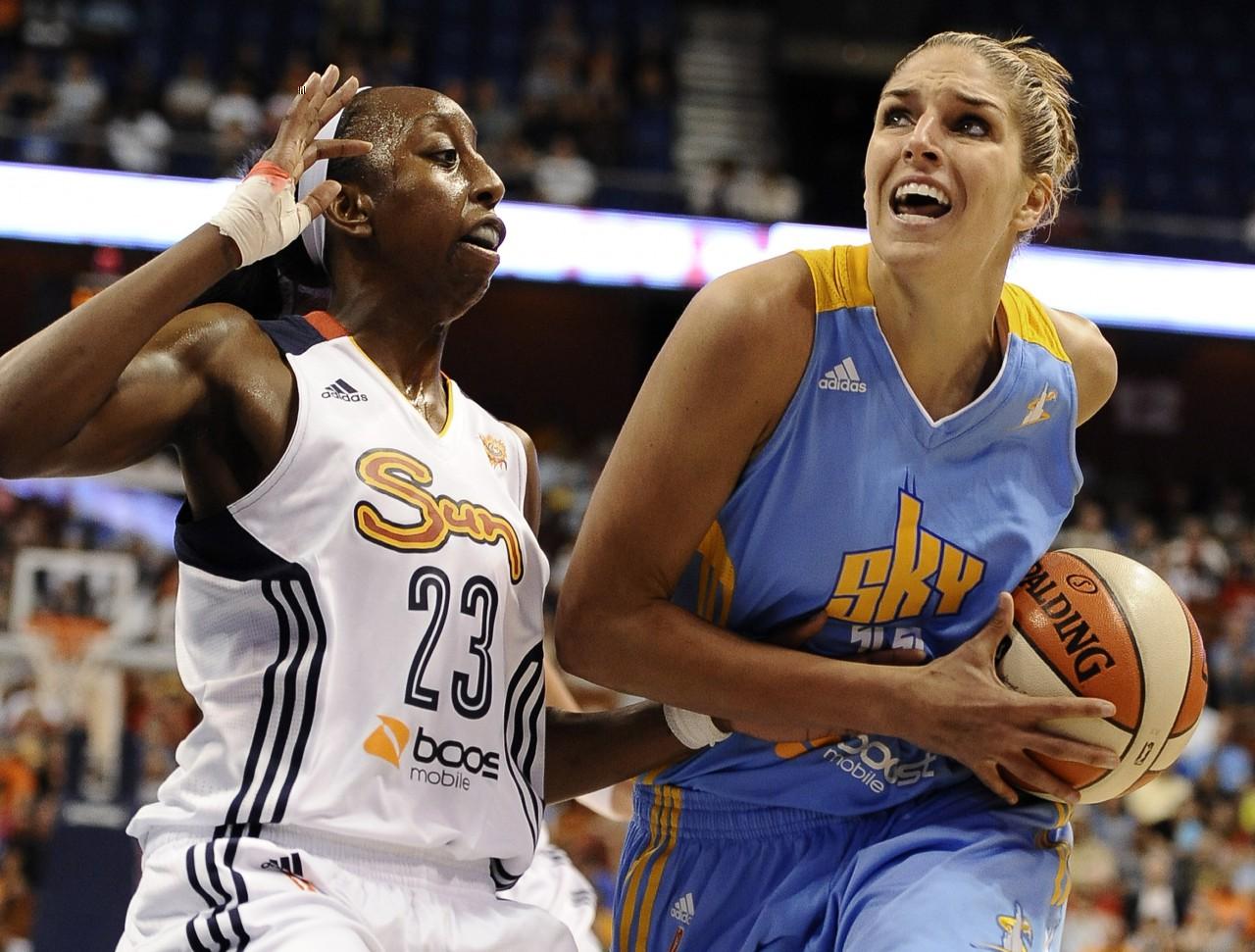 Photo: Elena Delle Donne has already emerged as a superstar in the WNBA.

Photo: Elena Delle Donne has already emerged as a superstar in the WNBA.

This team has potential. Although Dominique Wilkins is more commonly knows as being one of the best dunkers of all time, he did begin to develop a decent three point stroke towards the end of his career. Chris Bosh is one of the most finesse big men in the game right now, and has a lethal mid-range jumper. This team has no real three point ace, however. Swin Cash shot less than 30% from behind the arc this year, and Bosh and Wilkins were never known for their long range shot. This team will challenge for a spot in the championship, but I ultimately expect them to come up just short.

This team is flat-out wet. Stephen Curry, arguably the best shooter in the world, teams up with his dad who taught him that silky-smooth shot of his. Add in Becky Hammon, who has a career three point field goal percentage of almost 40%, and you have one of the best shooting teams in recent memory. I fully expect this team to take the cake. 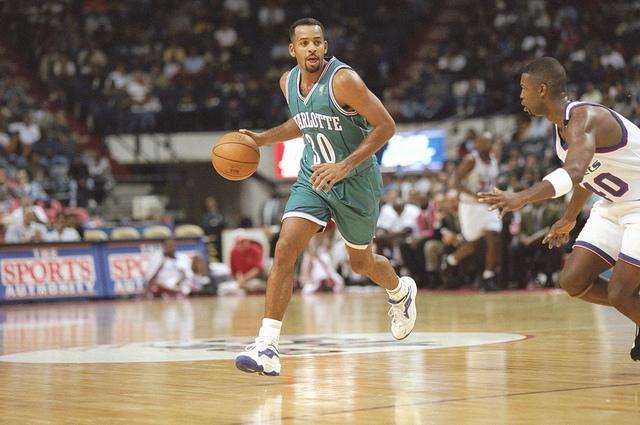 Photo: Having two people with the last name "Curry" in the competition might be too much for the rest of the field to handle.

Photo: Having two people with the last name "Curry" in the competition might be too much for the rest of the field to handle.

Any team with Kevin Durant has a shot. Karl Malone, however, was never known for his knockdown jumper. Durant will carry much of the load on this team. Diggins shot less than 25% from behind the arc last season while Durant is one of the best all around shooters in basketball. This team will battle Team 2 of the Eastern Conference for a spot in the finals.

In this challenge, each team of two must make it through an obstacle course in which they will need to use passing, dribbling and shooting skills. The top two pairs will advance to a championship showdown. The fastest time wins.

These two players do not possess the guard skills necessary to advance in this challenge. DeRozan, one of my favorite players, is definitely more suited for the dunk contest. If he was in the dunk contest this year, he would be a clear front runner. Alas, this is not the dunk contest. This team will be hard pressed to advance out of the initial round.

Two of the brightest young stars in the league pair up for this contest. Carter-Williams and Oladipo have both emerged as two of the best rookies out of last years draft class. In fact, Carter-Williams is the league's 10th leading assist man. Both players are known for their slashing style of play, however, each lacks a knockdown jumper. Since both players are elite athletes, they will certainly compete for a spot in the final round. However, I give the slight edge to the two Western Conference teams.

Damian Lillard won the contest last year, and this year he is paired with one of the most complete rookie guards in the league: Trey Burke. Burke's lack of size will be a non-factor in the competition, and instead, his stellar guard skills and smooth jump shot will shine bright. Both of these young guards possess the athleticism necessary to win the competition. This team is one of the few that has the skills and the athleticism. Dragic and Jackson could challenge them in the championship, but their speed will be too much to handle in the end. 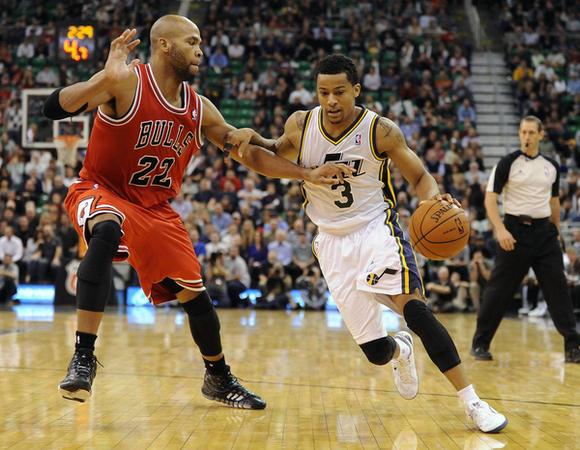 Photo: Trey Burke possesses all of the tools necessary to be successful in the Skills Challenge.

Photo: Trey Burke possesses all of the tools necessary to be successful in the Skills Challenge.

This team is probably the least well known of the bunch, but don't let that fool you. Jackson and Dragic have really come into their own this year. In fact, Dragic has been an elite scorer, putting up more than 20 points per game. But he is not just a scorer, as he is averaging 6.2 assists per game. Jackson is also having his best season and has stepped up in Russell Westbrook's absence. Both of these players have knockdown jumpers, something that is crucial in the competition. I expect this squad to challenge Lillard and Burke for the championship and surprise a lot of people along the way.

In this contest, each participant will have a certain amount of time to make as many three-pointers as possible. The top three-point scorer from the East will then face off against the best of the West for the championship. Here are my predictions on who will advance out of each conference.

Joe Johnson has played very well this year, shooting about 40% from behind the arc. He has had to be a main scoring option for the injury-riddled Nets, and every once in a while he just flat-out goes off. Earlier this year, Johnson went absolutely bonkers, putting up 29 points in the 3rd quarter en route to 10 three pointers on the night. Johnson has a smooth stroke and is a good spot up shooter. If Johnson gets hot, I believe he will knock-off the heavily favored Stephen Curry. 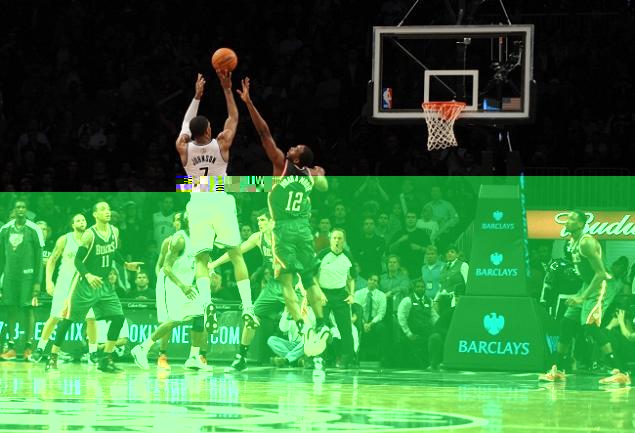 No surprises here. Stephen Curry is the consensus best shooter in the game, averaging over three three-pointers per game. His quick release and lethal accuracy is ideal for the timed competition, so don't expect Curry to have any trouble getting up all of his shots. However, a hot Joe Johnson could give him trouble in the finals. Expect Johnson to edge out Curry.

I believe the local John Wall has what it takes to win the dunk contest. John Wall's athleticism is legendary, as is his extremely competitive nature. Combine these two and you have a champion. Check out what happened last time Wall competed in a dunk contest, back in high school. 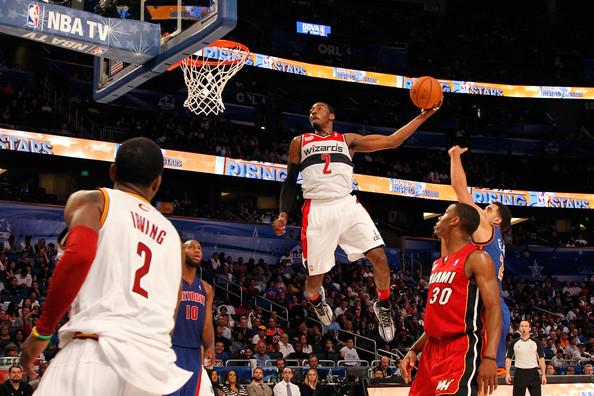 Paul George has emerged as one of the best players in the game this year, and also one of the most athletic. George combines Lebron-like bounce with an aura of coolness only few embody. If this in game dunk is any indicator, George will put on a SHOW. Honestly, it is a toss up for me between George and Wall.

The defending champ has come a long way since he won the contest one year ago. Ross made a name for himself as more than just a dunker earlier in the year when he went off for 51 points. However, he is still a ridiculous dunker, as evidenced by this dunk of the year candidate.