Keys for the Mavericks:
For the Dallas Mavericks to win their first NBA title in franchise history, they will have to control the tempo against the Heat and contain the dynamic duo of Shaquille O'Neal and Dwyane Wade. The Mavs must find a way to contain Shaq in the low-post—which usually means a double-team—without giving Wade too much room to maneuver from the perimeter to the paint. Dallas will also have to be wary of three-point specialists Jason Williams, Antoine Walker, James Posey and Gary Payton, who lurk on the perimeter looking for open threes. 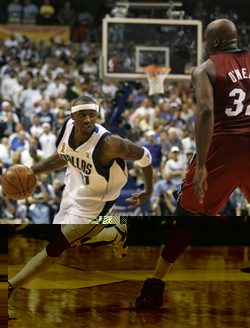 Photo: Jason Terry and the Mavs look to blow past Shaquille O'Neal and the Heat in the 2006 NBA Finals.

Photo: Jason Terry and the Mavs look to blow past Shaquille O'Neal and the Heat in the 2006 NBA Finals.

On the offensive end, Dallas' philosophy is simple: match the Heat basket for basket. Although the Pistons gave Miami a tough test in the Conference Finals, Detroit simply couldn't keep up with the Heat's offensive output in the series. And for the Mavs to put up the maximum number of points, their best bet is to run every offensive set through Dirk Nowitzki. The power forward has matured into a leader in this year's playoffs, and, with the help of Avery Johnson, has developed a renewed willingness to take the ball to the basket. His physical play, along with his fantastic outside shooting, gives Dirk the ability to take over a game, as he did in Game 5 of the Conference Finals when he dropped 50 points on the Phoenix Suns.

Game-Changer: DeSagana Diop, C
Although not a Dallas starter, Diop will be a key component in the NBA Finals, because of his rebounding, shot-blocking and, most importantly, ability to guard Heat center Shaquille O'Neal. In the 2006 Playoffs, Diop is averaging 5.6 rebounds and 1.4 blocks per game in 20 minutes of playing time. Mavs head coach Avery Johnson will likely give the 7-foot, 280-pound Diop more minutes against the Heat because of his length. Diop will team with starting center Erick Dampier in an effort to contain Shaq, a challenge that the rejuvenated defensive specialist should welcome. If Diop can help neutralize—or at least minimize—Shaq's presence in the series, the Mavs will have a much easier time getting past the Heat. And don't be surprised if Diop decides to throw down a ferocious dunk on The Big Aristotle.

Keys for the Heat:
Feed the Big Fella. If the Heat can get Shaq into the game early, they can put the Mavs away. It's no surprise that the Heat have breezed through the playoffs and Shaq has stepped up his game. Throughout the playoffs, he has scored 19 or more points in 11 of the Heat's 17 playoff games, all but three of which were wins. When Shaq gets the ball, and an inevitable double team, he frees up teammates for open shots. Even though he is aging, he is still the one and only Diesel: unstoppable with a head of steam.

Another important key for the Heat is to protect Dwyane Wade. Flash is undoubtedly the Heat's best player, and he has a bulls eye on his back. He is fearless when he drives to the basket and is the recipient of many a hard foul. If the Heat can keep their star off the deck and on his own two feet, they will have a good chance to win any game.

Game Changer: Jason Williams, G
In the clinching game six of the Eastern Conference Finals, Williams was the difference. He shot a near-perfect 10-12 from the field, including starting the game nine for his first nine. When Williams plays well, he gives the Heat an extra boost. He becomes a legitimate support option for Dwyane Wade. As a streak shooter, you never know whether Williams is going to be hot or cold, but when he is hot, the Heat are a completely different team. This season, when Williams scores over 20 points the Heat are 11-2. In the playoffs, when he scores 17 points or more, the Heat are 3-1. The Heat know how to win without him, but it takes a burden off Shaq and Wade when Williams shows up to play.

Josh's Final Word:
Both teams worked tirelessly to get to the Finals, but the road ends here for the Mavericks. As much as I would like to see Mark Cuban win an NBA Championship, the Heat are too talented. With inside and outside options (see Wade, Shaq and Antoine Walker), the Heat are too balanced to lose.

Abe's Final Word:
The 2006 NBA Finals is as much a matchup of head coaches and NBA superstars as it is a matchup of two teams seeking their first championships. The battles of Pat Riley, a legendary motivator and master tactician, versus Avery Johnson, a fiery young coach who has done the impossible—turn the tide of a team's philosophy in one year and the Batman-and-Robin-like duo of Shaq and Wade versus the Superman-esque Dirk are sure to get heated. Yet in the midst of these compelling matchups, Dallas has a slight edge over Miami. Why? (No, it's not their dance team) Because the Mavs took perhaps the toughest playoff road this season to make it to the Finals, going through conference foes the Clippers, Suns and Spurs.