A look at this season's top 10 teams

College basketball is back again, and in all likelihood, it will be the only basketball to watch this winter. Unfortunately for college basketball fans, this season could be the last one of its kind since many basketball powerhouses are switching conferences starting next year.

Beginning in 2012, the Big East, arguably the top conference in the National Collegiate Athletic Association (NCAA), is losing several of its strongest teams, including Syracuse and Pittsburgh, to the Atlantic Coast Conference (ACC). The Big 12 is shrinking at an alarming rate and the South Eastern Conference (SEC), Big Ten and Pacific 12 (Pac 12) are all growing quickly. No one knows what will happen to college basketball in years to come, but this season should be a great year of hoops.

SCO college hoops buff, Jacob, took a look at the Associated Press's (AP) Preseason Poll, which ranks the nation's top 25 teams, and gave his take on the top 10 teams.

The Tar Heels have everything a team could possibly want, with a blend of top recruits and strong seniors, as well as college basketball's best player, sophomore Harrison Barnes. As a rookie last year, Barnes averaged 15.7 points a game which helped lead the Heels to the Elite Eight. 2. Kentucky Wildcats

John Calipari worked his magic once again this year by pulling in the NCAA's top recruiting class for the third year in a row. After last year's Final Four loss to Connecticut, the Wildcats lost all their starters and only have two seniors on the roster this year. But the team's lack of experience is made up for with pure skill. Freshman Anthony Davis will put up big numbers, which may place him ahead of Barnes on the draft board come June, and Davis will be followed quickly by Marquis Teague, Terrence Jones and Michael Kidd-Gilchrist.

After being ousted in the Sweet Sixteen by Kentucky last year, the Buckeyes are looking for revenge. The Buckeyes will benefit from the return of most of their players, including star sophomore Jared Sullinger. At 6' 9'' and 290 pounds, the Buckeyes have an offensive and defensive force in the paint. Paired with the sixth best recruiting class in the country, Sullinger will have no trouble keeping Ohio State afloat.

The defending champions took a big hit with the loss of several players, including Kemba Walker. However, number two prospect Andre Drummond has everything it takes to lead a team, even though he only turned eighteen three months ago. The Huskies will also see production from sophomores Jeremy Lamb and Shabazz Napier, both of whom were key components in last year's title run.

Syracuse was upset early in the tournament last year and was knocked in the third round, but the team is poised to make a deeper run this year. Even though the Orange have no standout player, it is a versatile team due to its three starting seniors and stud freshman Rakeem Christmas. 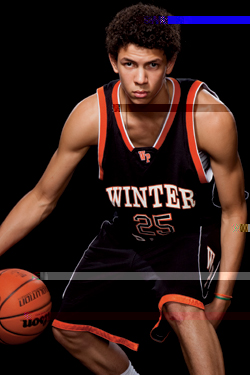 Photo: Austin Rivers was the nation's top high school player in 2011 before signing with the Blue Devils.

Photo: Austin Rivers was the nation's top high school player in 2011 before signing with the Blue Devils. Photo courtesy of ESPN.

The Blue Devils are an interesting team in several ways. First, Coach Krzyzewski is only three wins away from setting the division one all time college basketball wins record. Duke is also the first team in over 50 years to have three brothers playing for them at the same time (Marshall, Miles and Mason Plumlee). Finally, they have the highly-touted recruit Austin Rivers, who will shine on the court alongside Seth Curry and the Plumlees. Duke managed to sign the high school sensation and son of NBA coach Doc Rivers, and this will pay off for them in the long run. 7. Vanderbilt Commodores

Vandy was unable to win a game in last year's tournament, but with the return of their starting five and top three bench players, the Commodores can make some serious noise this year. Defense was a concern with last year's team, but the Commodores should be able to fix their problems enough to allow their dominant offense to lead the way.

There is no doubt that the Gators have plenty of skill, but unfortunately their skill has not been evenly displaced among the positions. With a plethora of guards and an absence of big men, Florida's playing style will be quite interesting to watch.

The Cardinals brought in a good class of freshmen during the offseason, but it is definitely junior Peyton Siva's team in Louisville. Siva was great all year long, until the Cardinals got ousted from the tourney by Morehead State. He's back again this year, with a whole new team to work with and hope for a tournament push.

Coach Jamie Dixon has a great team to work with this year. Led by senior Ashton Gibbs, it will be the team's last year in the Big East and the Panthers are looking to go out with a bang. The team is once again defensively minded and they have the ability to shut down opponents in the paint.

North Carolina: With good leadership and outstanding talent, North Carolina is going to be celebrating a national championship when April rolls around.