Never too quick for Vick 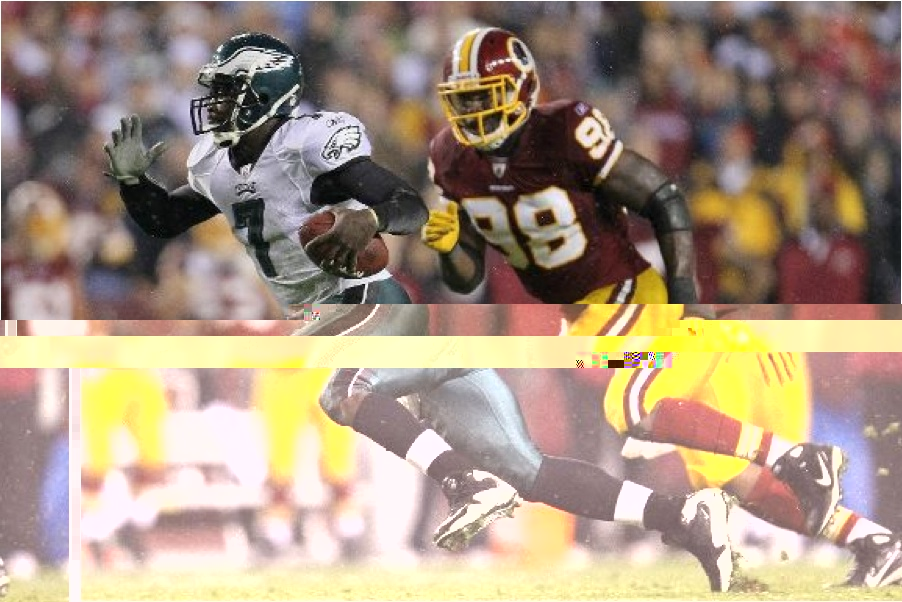 Photo: Michael Vick of the Philadelphia Eagles ran for 88 yards during his second game against the Washington Redskins, where the Eagles took the victory with a score of 59-28.

Photo: Michael Vick of the Philadelphia Eagles ran for 88 yards during his second game against the Washington Redskins, where the Eagles took the victory with a score of 59-28.

Not many would have expected Michael Vick to come out of his dog-dueling slump to kick the Washington Redskins all the way back to the locker room of Fed-Ex field. Since Vick left the Atlanta Falcons three years ago due to his dog-fighting conviction, Americans have sent endless ridicule and criticism his way. But that horrible ordeal is long gone as Vick has proved himself numerous times, not only by serving his time but also by crushing the Redskins 59-28 last Monday. In the rivalry game against the New York Giants this Sunday night, the Philadelphia Eagles and Vick are now out to prove the progress they have made after overcoming immense obstacles in past seasons.

Vick started his career as the Falcons' starting quarterback. His speed was really the only thing that really set him apart, but being a mobile quarterback had its perks. If a receiver wasn't open, Vick could easily scoot through the defensive line for a gain - but the downside was his lack of passes. Vick rarely stayed inside the pocket and spent his time on the team proving himself as more of a running back than a quarterback.

Then in 2009, once Vick's 23-month sentence was over, he re-entered the National Football League (NFL) as third-string quarterback for the Eagles. But last year, the team gave away their one-of-a-kind quarterback, Donovan McNabb to the Washington Redskins. The reasons for this trade are not completely concrete. Maybe it was because Vick, the lonely third stringer, had begun to develop into more than a mobile quarterback; he became more of a full blown, throw-the-ball-straight-into-the-end-zone quarterback. Maybe the trade was because McNabb delivered as a quarterback, but was never able to scrounge up Super Bowl win, or maybe because Head coach Andy Reid saw two younger quarterbacks waiting to fight for a starting position. Who knows? But whatever the reason McNabb was shipped to Washington and Vick moved up the chain in Philadelphia.

The Eagles' starting quarterback became Kevin Kolb, which wasn't a surprise after Reid had promised him the job once McNabb was gone, but after suffering a concussion in the during the season opener against the Green Bay Packers, Vick was thrown head first into the game. He did not disappoint. Kolb had brought the team down completely and left the score at 13-3 when he was taken off of the field, but as soon as Vick went in, both the score and the game dynamic changed drastically. Vick presented not only exceptional statistics for the game, but also an attitude that had the entire City of Brotherly Love cheering. Reid again stuck out his neck for Vick and told the NFL community that Kolb was out and Vick was in. This shocked the Eagles fan base (known to be very loud and opinionated), but Vick proved everyone wrong and made Reid look like a football genius.

Vick's game became extremely versatile, especially compared to his prior campaign on the Falcons. He not only throws the ball accurately, but he shows confidence in the pocket long enough to make intelligent decisions about where he plans to go with the football. Throwing for 333 yards, including an 88-yard pass to wide receiver Desean Jackson, and four touchdowns during the Redskins game showed Vick's maturity as a quarterback. He chooses to throw more because he realizes he isn't as fast as he used to be in his younger days, but occasionally Vick will send defenses spinning in circles when he sweeps through them faster than any other quarterback around just as he showed by running 88 yards and two scores during the Redskins game.

Vick continues to impress throughout the NFL and holds the leading passer rating despite his rib injury he suffered earlier in the season. He has passed for 1,350 yards and 11 touchdowns this season. Being one of the fastest quarterbacks in the NFL, Vick doesn't disappoint with his 341 rushing yards and four rushing touchdowns either.

During the Giants game this Sunday quarterback Eli Manning better pump his defense up, because they are in for a surprise when Vick takes the field. With the many options Vick has, the Giants' defense is bound to be smacked down and look like a high school football team just as the Redskins did last Monday.