The Montgomery County Board of Education held the vote for the 2016 president and vice president on Dec. 8, unanimously electing Michael Durso and Judith Docca as the new president and vice-president. Durso replaced Board member Patty O'Neil, as her term ended as Board president this year.

The Board is made up of eight members: seven adults and one student. Durso served as vice president last term and assumed the president position for this year. He will serve until December 2016.

Both Durso and Docca have been a part of Montgomery County Public Schools for many years. Durso was elected to his second four-year term as a member of the Board back in Nov. 2014 and was first appointed on the Board on June 26, 2009. Prior to that, Durso had a 44-year background in education, working both as a social studies teacher and principal for a number of schools, including Springbrook High School. 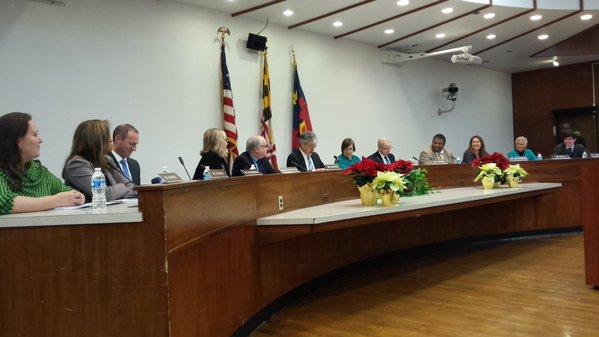 Photo: Michael Durso and Judith Docca were voted as the 2016 president and vice president of the board, respectively.

Photo: Michael Durso and Judith Docca were voted as the 2016 president and vice president of the board, respectively.

Docca is currently serving her third term on the Board of Education and has spent 38 years as a teacher and administrator with Montgomery County Public Schools. She began her career as a Spanish and French teacher. Docca also was the assistant principal of Montgomery Blair High School.

The Board sets policies for the school system and responds to different concerns from schools. "We are all involved in committees and we get together once a month- one day meeting and one night meeting," Durso said.

In the past, Docca and Durso have dealt with issues including rearranging the school calendar, radon testing, the chrome book program, and budgetary concerns. They will have to address these concerns as president and vice president. "There are a number of issues that come up- some that might seem trivial and some that seems to get more tension," Durso said. The recent decision to have Eid-al-Adha, a Muslim holiday, as a professional day for students was particularly controversial and required much deliberation on the Board's part. Durso supported the notion, as he believes that it should be put in place to respect Muslim students, and will continue to advocate for inclusivity as President.

Montgomery Blair High School has been requesting additional staff for the school, but Blair's unusually large size of 2800 students makes it more difficult for the Board to get enough staff. According to Durso, the most pertinent issue that faces schools in Montgomery County concern staffing. "Ask any school if they could use another teacher, could use another counselor, they will always say yes," Durso said.
In 2016, Durso and Docca will be focusing on issues such as the superintendent search and budget.