The makers of Scrabble have added more than 6,500 new words to the board game's official Players Dictionary, drawing criticism from its key demographic: old white men. For years, the teen population has been beaten by their parents during family game night because of Scrabble's ageist word list. Old people will whip out an arcane term like "laird” or "syzygy,” for triple word scores and us young folk counter with "dog” or "house” for a measly ten points. 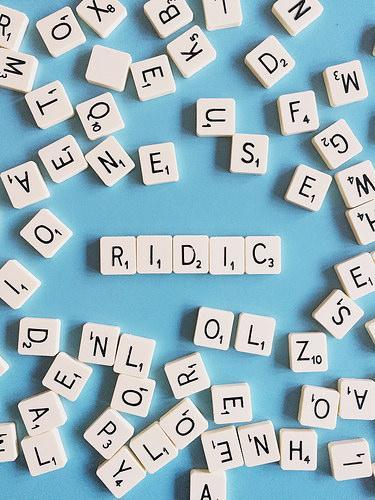 Photo: "Ridic" is one of the many new words added to the Scrabble Players Dictionary.

Photo: "Ridic" is one of the many new words added to the Scrabble Players Dictionary.

For any teen who has had this problem in the past, a few of the new words should tip the scales a little further towards them. Below are some of the hip new words that you can use to pull off an unlikely victory against your parents in Scrabble.

1. lolz: noun, Laughing at someone else's or one's own expense.

Great for getting rid of that pesky z tile, lolz is the plural form of the world lol. Up until this point lolz has been used only as texting vernacular, but now it can be the key to winning a hard fought game of Scrabble! Try and get that last letter onto a triple point space for a really big score.

2. hashtag: noun, A word or phrase preceded by a hashmark on Twitter, used to denote the topic of a post.

Hashtag is a great opportunity to get a seven letter bingo. Beware: my dad has played this word against me, so your competition might already be onto this one.

Scrabble justifies this term by saying it's short for newbie, but we all know it's just a nod to the gamers who decide to get off their computers and play Scrabble for once.

4. shizzle: noun, A form of United States rap slang for the word "sure."

Popularized by Snoop Dogg, this term should fo' shizzle be included in your future Scrabble endeavors! The double "z” makes it worth easy points, even though a blank must be used.

This word is one of the only legitimate ones being added to the dictionary, because of its wide usage. If you don't know about emoji at this point, you're probably living under a rock.

Man, they're really playing it safe with this word. If they're going to abbreviate the word ridiculous, they might as well go all the way to redonk!

When I read they added new words to the Scrabble dictionary, I immediately thought of twerk. But nothing could turn people off to the dance craze faster than this definition. A low squatting stance?!

For a more complete list of these new teen-friendly Scrabble words, you'll have to buy the official Players Dictionary, but if you beat your parents with some of these then you know who to thanx. And yes, that abbreviation for "thank you” is in there as well.