New Years across the continents

Holiday customs in countries around the world

New Years is celebrated in every country and on every continent around the world. Everyone awaits the arrival of the New Year to start off with a clean slate. In this page, you will be able to analyze the various New Years celebrations of one country from each continent of our diverse world. 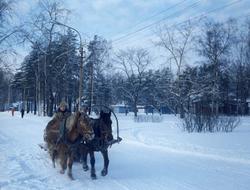 Photo: St. Petersburg in the winter

Photo: St. Petersburg in the winter

During New Year's, families get together, usually have a big dinner and eat lots foods such as pirozhki, crab sticks and mushrooms stewed in cream. At 11:30 p.m., they turn on the television to watch the presidential speech. Afterwards, people toast the year well spent and the upcoming year. At precisely 12:00 a.m., the radio translates the sound of the clock chiming at Red Square in Moscow, and so the New Year starts in Russia.
Sophomore Sveta Godakova, who attends Wilson High School in D.C., believes that in America, Christmas is more prominent and most celebrated than New Year, while in Russia it is the other way around. New Years is the time when families and friends get together around the fur-tree and give one another presents and celebrate. As Godakova explains, this might be due to the fact that "Christmas does not start until Jan. 7 in Russia because the Russians go by an old calendar."

Typically, winter vacations are from Jan. 1 till Jan. 10. At this time during the public holidays, so-called "fur-trees" are arranged and Father Frost (in Russian pronounced as "Ded Moroz") and Snow Maiden, Ded Moroz's charming assistant, visit the children.


Ingredients: 500 g fresh mushrooms; 1 cup of sour cream; 1 tablespoon butter
Directions: Wash mushrooms. Chop finely and fry until light brown. Bring cream to boil. Put mushrooms into a baking pan and pour cream over. Make a bunch form celery and dill and put on the top, add salt, pepper and a bay leaf. Cover tightly and put in a heated oven for an hour to stew. When mushrooms are served, take the green bunch out. 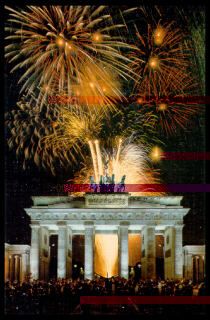 Each New Year's Eve, the Brandenburg Gate draws hundreds of thousands to celebrate the New Year. New Year's celebrations have been celebrated there since the 1990s, when it was a border between the East and West sides of divided Germany.

When the clock strikes 12:00 a.m., there is a firework display. Then the people disperse to go to parties or clubs to celebrate some more.

According to FatherNet, some people in Germany drop molten lead into cold water and try to tell the future from the shape it makes. People also leave a bit of every food eaten on New Year's Eve on their plate until after Midnight as a way of ensuring a well-stocked larder.

Junior Soeren Schroeder, a foreign exchange student at Blair from Hamburg, Germany, recalls the big celebrations in Brandenburg Gate. "They have big TV shows and have musicians singing and lots of interesting live acts. And there are a lot of big parties around the city." He usually spends New Year with his friends. "We buy a lot of fireworks and then fire them off at around 12:00 a.m. After that we go and party."

Photo: Bamboo trees that are intended to chase away evil spirits

Photo: Bamboo trees that are intended to chase away evil spirits

The Vietnamese New Years is Tet, which occurs in February. During Tet people eat a special rice pudding that is made of mung beans and pork. Fruits such as oranges, coconuts, grapefruits and watermelon are saved on Tet. One of the most popular delicacies is watermelon seeds that people dye in color red. What makes this watermelon so special is that it only comes out around Tet.

On the last day of the Vietnamese year, a bamboo tree is usually planted in front of each house and then decorated in flowers and red ribbons. In addition to being used as décor, the decorations are also believed to ward off evil spirits.

Once the New Year starts, families visit their closest relatives and friends on the first day. The second day they visit acquaintances and on the third day they tend to visit friends of their friends. On the fourth day everyone returns to their daily routine.

As sophomore Bao-Ngoc Nguyen says, the Vietnamese New Year is very similar to the Chinese New Year. In both cultures, people give one another red envelopes with money, which are believed to bring prosperity. In addition there are "firecrackers and dragon dancing and both countries use the lunar calendar in both cultures." Nevertheless in Vietnam one traditional food separates the two cultures. "It is rolled up sticky rice in banana leaves," explains Nguyen. "Inside the rice you usually put meat." This dish is called banh chung and cooked chiefly in Vietnam. It is a must have dish in every Vietnamese house, and used as an offering to be placed on the ancestor's altars. 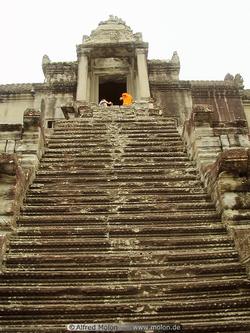 The New Year festival in Cambodia starts on the 12, 13 or 14 April according to the Gregorian calendar and lasts for three days. Cambodian New Year's Eve is called Chaul Chnam Thmey which means 'entering the New Year.'

People clean and decorate their houses, and also set up an altar to welcome the New Year Spirit Tevada Chhnam Thmey, who is said to come down to earth at this time. A statue of the Buddha is put on the altar, as well as flowers, candles, incense, a bowl of scented water, food and drink, and banana leaves shaped into different figures.

People douse each other with water as a blessing. Water can be colored red, pink, or yellow to symbolize a colorful future. New clothing is worn and people give each other money and food as a sign of respect.

Senior Catherine Lee, who is originally from Cambodia, believes that the tradition of giving money as a gift has been derived from the Chinese culture. However, the other celebrations are pretty unique to the Cambodian culture. She mentions the tradition of throwing water at people as a sign of good luck. "Once people threw water at me and I was soaked," she says laughing. 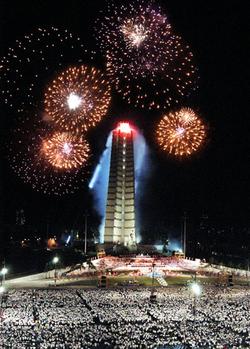 For Cubans, New Years Eve is a night spent with your loved ones, eating and dancing. As a preparation for New Years, children make scarecrows, which represent the old year and all the bad things that happened in that year. Then they burn the doll and get rid of all the negative things. Right after the doll is burnt, people set off fireworks. It is also customary to dump the water on the street, which again symbolizes getting rid of the old and starting with the new.

The most common tradition is eating grapes once the clock strikes 12:00 a.m. For every time the clock strikes, people have to eat a grape. As a result, some people end up stuffing all of them in their mouths and then trying to chew them.

Junior Bianca Reyes explains that "every grape is a wish. So at the end you have made 12 wishes." Even now that she is living in America, her family still follows that tradition and every time the clock strikes 12:00 a.m., she tries to chew and swallow all the 12 grapes on time.

Photo: A view of a village in Sierra Leone

Photo: A view of a village in Sierra Leone

Because English is spoken in Sierra Leone, you could simply say "Happy New Year"

In Sierra Leone, mainly in the suburbs, the celebration of the New Year comes at the seed-sowing time and lasts a day and a half. This happens at the end of the season, once the rain has stopped and draught has begun, stopping most plant growth. Then comes rain, bringing with it new life.

Senior Aminata Jalloh finds American Christmas is very similar to Christmas in Sierra Leone. "The two countries celebrate it almost in the same way, with the Christmas tree and the giving out of presents." Nonetheless, there are some differences that Jalloh has observed – one of them being food. "For the holidays we usually eat jolof rice, plantains, couscous," she says thoughtfully. She then adds that the New Years celebration in Sierra Leone "has more depth and meaning, while the one in America is more commercial."


Ingredients: 2 cups flour, 6 tablespoons sugar, 3 teaspoons ginger, 1/2 teaspoon red peppers, 1/2 up butter, 1/2 cup water
Directions: Sift the flour, sugar, ginger and red pepper together. Add water and mix to form firm dough. Roll out on a floured board about 3 to 8 inches thick. Cut into rounds. Bake on a greased cookie sheet for about 15 minutes at 350 degrees. 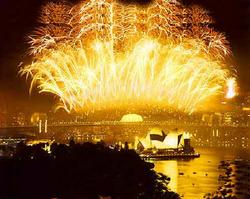 In Australia they celebrate the New Year on Jan. 1. This day is a public holiday and many people have picnics and camp out on the beach, due to the fact that it is summer in the southern hemisphere.

Australians have parties that start on December 31 and at midnight they start to make noise with whistles and rattles, car horns and church bells to ring in the New Year.

New Year in Australia is a day for outdoor activities such as rodeos, picnic races and surf carnivals.

Ingredients: 1 1/2 cups of flour; 3 teaspoons of baking powder; 2 teaspoons of ground cinnamo; 30 g butter; 2 teaspoons of sugar; 1/2 cup mashed bananas; 1/2 cup milk; FOR TOFFEE SAUCE: 2 cups water, 30 g butter, 1 cup sugar.
Directions: Sift flour, baking powder and cinnamon into a bowl. Rub in butter. Stir in sugar, banana, and enough milk to form sticky dough. To make the sauce, combine all the sauce ingredients in a saucepan. Stir over a low heat, without boiling until the sugar has dissolved. When it has dissolved brings to the boil, without stirring and then reduces the heat to a simmer. Drop tablespoons of dough mixture into the simmering sauce and simmer them, covered, for 15 minutes or until they are cooked. Serve the dumpling with the toffee sauce.