A black ninja walks through the 150s hallway, stealthily slipping by the Expedition Club's colorful display of an erupting brown paper volcano with red and yellow streamers flowing out. A few feet away, a bold poster of graffiti art showcases the Hispanic Club's culture, proclaiming "Orgullo y Cultura" (pride and culture), as it hangs in the 160s hallway amongst the oversized dominos dangling from the ceiling. In the SAC, students cheer and beat their hands along with the Blair drumline as it pounds out a pulsing beat atop the SAC platform. The festive decorations that adorn many of Blair's hallways and new spirit activities have set this year's homecoming festivities apart from recent years, tremendously increasing the spirit at Blair.

In previous years, Spirit Week lacked the electric energy and excitement that permeated throughout the halls of Blair this past week. The atmosphere at the school was different this year, with seemingly more students getting involved in the hype of Spirit Week. In an informal poll of 100 Blazers taken during 5A and 5B lunch this week, 77 percent of Blazers said that they felt that school spirit this year was greatly improved from last year. 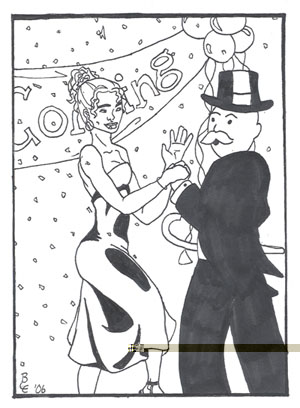 Photo:
With several new activities developed by the SGA, from the root of the origin of the numbers are easy to detect. In previous years only the poles on Blair Boulevard were decorated by the class. This year, Blair clubs had the opportunity to fill several hallways in the building with elaborate themed displays. The class councils also decorated entire stretches of Blair Boulevard with intricate displays based on their assigned board games. The SGA and BNC collaborated to stage Spirit Week performances during 5A and 5B lunch, pumping up students with routines by the Hispanic Club, Step Team, Blair drumline and music from BNC. Class councils created videos that aired on InfoFlow to promote the Homecoming dance. Finally, in a completely new event, the SGA scheduled a tailgating party for the afternoon before the homecoming game, during which Blazers could buy food, deck themselves in spirit accessories and have a good time before heading off to the stadium to cheer on the football team.

This school year has been a huge leap forward for Blair, which has commonly been criticized as a spiritless school. In previous years, hardly anyone participated in Spirit Days and Homecoming was widely known as a lackluster event with low attendance. But this year, Blazers and staff have managed to pump excitement and energy into the previously feeble phenomenon of Blazer pride and spirit. The events showed Blazers that the SGA and the administration want to breathe the life back into Spirit Week and encouraged students to get involved. All improvements aside, Blair still has room for improvement before it achieves a more cohesive unity essential to Spirit Week.

Before Blair moved into the new building, almost every inch of the halls were adorned during Spirit Week in complex decorations showcasing the pride of the Blair community. Former SGA sponsor John Kaluta remembers floats, assembled by the SGA and by various clubs at old Blair during the early 90s, as one of the biggest parts of Homecoming week. "The parade started near where the Majestic [Theater] is now, and went down to the football stadium," he recalls. Some years, there were as many as eight lavishly ornamented and spirited floats parading through the stadium, according to Kaluta.

Although this year's initiatives bring the school closer to those old golden days, the attitude today is a far cry from before. Assistant Athletic Director John MacDonald remembers Spirit Week as a time when the Blair community was unified in showing their pride for the school. This week, Principal Phillip Gainous had to deter students from vandalizing the decorations and take disciplinary action against Blazers who harassed freshman. MacDonald doesn't recall "Freshman Hell Week" starting until about 10 years ago, and states that since then it has become a "part of Spirit Week."

Blair is a community, and Spirit Week is a time for Blazers to unite and showcase not only their spirit, but also their pride in the school and in all of its students. Still, Blazers have undoubtedly worked hard to make this year's Spirit Week a unique event, bringing back the excitement that Spirit Week has lacked for such a long time.