Newly revamped Blair Fair to be held this week

Blair Fair will be held this Thursday, April 19 and Friday, April 20 after school. The fair, open to anyone in the community, features a street basketball tournament, the Mr. and Ms. Blazer talent competition, a silent auction, a carnival and a poetry slam.

Held in the school, Blair Fair is "an opportunity for the local community to 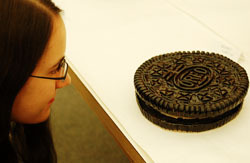 Take a bite out of art

come into the school and see what we offer," said school administrator James Short, who oversaw and planned the event. According to Short, the Fair is meant to entertain and give back to the community.

The festivities will begin with the basketball tournament in the gym from 4 to 7 p.m. on Thursday. The tournament will conclude on Friday between 2:30 and 4:45 p.m. Nineteen six-member teams, including one team of faculty, will compete in the single elimination tournament.

After the end of the Basketball Tournament Friday, the Mr. and Ms. Blazer talent show will be held at 4:45 p.m. in the auditorium. The Silent Auction will take place from 4:30 to 9 p.m. in the SAC. The events will conclude with the Poetry Slam, held from 7 to 8 p.m. in the Media Center.

New to Blair Fair this year is an SGA sponsored carnival, which will be held Friday from 5 to 8 p.m. in the bus parking lot. The carnival includes a moonbounce, a dunk tank, food and several other attractions for all ages. Tickets cost $.50 and can be purchased in the SAC at the time of the carnival.

According to SGA Communications Director Vijay Baharani, who is planning the carnival, SGA hopes to attract people of all ages to the carnival. "Attendance at Blair Fair has been waning in the past couple of years, so the SGA thought [the carnival] would be a good way to boost attendance," Baharani said.

Along with the events, Blair Fair will include tables along Blair Boulevard to showcase the academies, clubs and departments and provide them with a place to display information. Blair will also serve free hot dogs, chips, lemonade and cookies at the event.