Known for giving entertaining and creative performances, Blair's acclaimed a cappella group, InToneNation (ITN), is gearing up for several new projects that are sure to leave their audiences buzzing. New gigs, new members, new songs and a new CD are just some of the things in the works for the talented group of 16 Blazers. 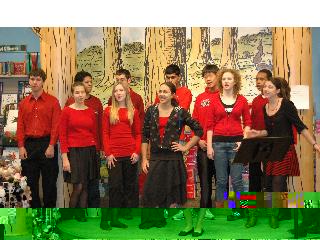 Through auditions held during lunch, ITN found a promising group of eager, young tenors who are enthusiastic about learning new songs and strengthening the group dynamic. The group held its last auditions this past Thursday and plans to hold callbacks next week, according to senior Musical Director Corinne Ducey. "We have more energy than ever, we're a really great mix together and we're eager to start," Ducey said.

The weekly Sunday meetings have focused mainly on getting everyone caught up with the group and its current goals. "We're just teaching our new people our songs," senior Administrative Director Julie Ufford said. "We're just really excited."

Fans of ITN will be equally excited to see them in action at the several gigs the musical group has planned. The group plans to raise money for Blair's After-prom in conjunction with the Parent-Teacher-Student Association (PTSA) in November, according to junior Tina Munoz-Pandya, an ITN Public Relations (PR) manager. "We will be singing at the fundraiser at Barnes & Noble," she said. The group will also be performing at Blair's Winter Choral Concert, giving its fans another chance to hear some of its new tunes.

The group has been extending their body of work and branching into new areas of music, according to senior PR manager Adam Carey. "We're revamping our repertoire and trying some hip-hop," he said. "We're trying to rework some Rihanna songs and possibly Chris Brown." ITN is looking to try out more modern tunes, such as Rihanna's "Shut Up and Drive" and Justin Timberlake's "What Goes Around."

Perhaps most exciting for ITN was being contacted about a month ago by one of the nation's top a cappella studios, Blue House Recording Studios. The members were excited and thrilled that Blue House had contacted them first. "They contacted us this fall after seeing our concert on YouTube. We were really flattered to get that message from them," Ducey said.

ITN is currently preparing to record and mix a new CD, which will play to their fans' love of current songs as well as some of the oldies, according to the PR team. "The CD will include a bunch of our newer songs and a lot of our classics," stretching to the past three years, Munoz-Pandya said. "We tried to choose songs we felt represented the whole group." The group is still tentatively working out a date to start recording with Blue House, according to Carey.

While ITN is still in the early stages of putting the CD together and, as Munoz-Pandya said, "not really in full swing yet," fans of ITN are sure to be eagerly awaiting new material from their favorite local a cappella group.