NewsChips: 16 and 17 year-olds can vote in Takoma Park

Last Monday, the Takoma Park City Council voted 6-1 to allow 16 and 17-year-olds to vote in city elections starting in November. This is a great law modification that is sure to benefit the community. 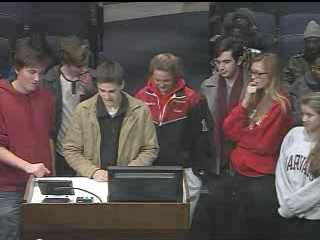 Photo: Blair students including Munger (second from left), Sebastian (fourth from left), O'Connor (third from right) and others testify before the Takoma Park City Council in favor of voting rights for teens.

Photo: Blair students including Munger (second from left), Sebastian (fourth from left), O'Connor (third from right) and others testify before the Takoma Park City Council in favor of voting rights for teens. Photo courtesy of Takoma Park Silver Spring Voice.

Takoma Park, Md. is now the first jurisdiction in the nation to allow 16 and 17-year-olds to vote in local elections. This will go down in history as revolutionary, and the amazing part is that many Blair students contributed to help make this happen. Several Blazers spoke out at Takoma Park City Council meetings in favor of lowering the voting age, including juniors Dillon Sebastian, Isabel Hendrix-Jenkins, Paul Munger and Kevin O'Connor.

At Blair, all sophomores are required to take a National State and Local (NSL) Government course. Therefore, as of 10th grade, Blazers are very well versed in the way our government functions. The 16 and 17-year-olds who can now vote probably understand how government works much better than their parents do at this point.

Not only will this law revision benefit our local community, but it may also help other progressive cities in the country allow non-adults to vote. This voting law change could spark other law revision for cities all over the country. Many are already in favor of changing their cities' voting age, such as cities in Illinois. I am sure that many other cities will follow Takoma Park's footsteps and lower their voting age sooner or later. By 2023 the majority of United States cities are bound to have lowered their voting age as well.

Lowering the voting age to 16 is completely logical because 16 and 17-year-olds already impact the community so much as it is. As long as we 16 and 17-year-olds contribute to society, we may as well have a say in what happens in it as well. Therefore, Takoma Park's liberal move in lowering the voting age was an incredible change that will help many in the city and is bound to spread all over the country.