NewsChips: Boy Scouts back away from progress

The Boy Scouts of America (BSA) set themselves back yesterday when the organization announced it was deferring a re-evaluation of its policy on accepting gay members and troop leaders until May. The organization released a statement explaining that the decision would take more time "due to the complexity of this issue," which is ridiculous because outright discrimination is not complex at all. 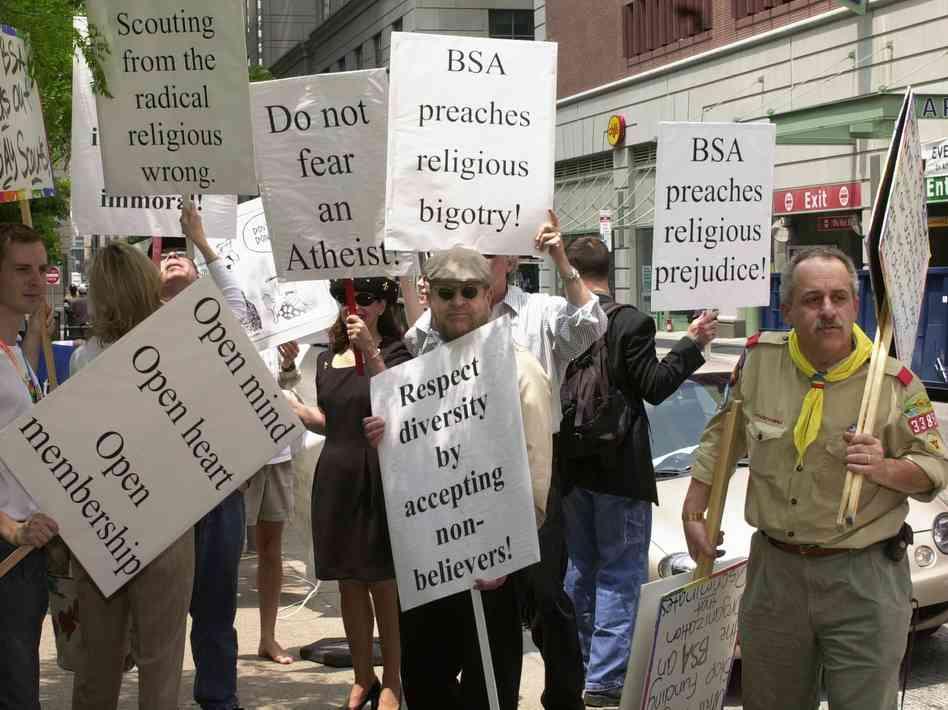 Photo: Many supporters of lifting the ban on gay members protest the BSA's decision.

Photo: Many supporters of lifting the ban on gay members protest the BSA's decision. Photo courtesy of NPR.

When the BSA originally announced the vote in January, activists on both sides of the issue responded with demonstrations and debate. Their forceful response contrasts heavily with the mild policy the BSA was considering putting in place, which would leave the decision of whether to accept gay members and leaders up to local chapters.

The deferment of the vote may have been a response to lobbying from conservative groups. One such group called Texas Values held a "prayer vigil and rally" to remind everyone of their opposition to lifting the ban. Their flyer for the event has direct addresses to pastors, fathers and mothers; one reads "Pastors, if the scouts fall, the church is next in the sights of the activists committed to forcing their immorality on society," as if the Boy Scouts is actually a religious institution, second only to the Church itself.

Meanwhile, everyone outside the anti-gay prejudice bubble is probably sick of hate groups claiming that everything they touch is sanctified with their righteous skin cells, and thus any policy that goes against their most extreme views violates their religious freedom.

The board of the BSA, assuming their intentions towards gay Scouts are actually in good faith, made a huge mistake postponing the vote. Because supporters of the ban will most likely go on being prejudiced, regardless of what the official policy states, troops comprised of such people will never be welcoming to gay kids or leaders. In a way, lifting the ban would be largely symbolic, because troops that are going to open their membership to gay people probably already have. The most BSA can do is make a big deal out of the ritual of lifting the ban, using stronger anti-discriminatory language and voting promptly and on both counts they've already failed.

But the BSA still has the opportunity to uphold their actual values. Instead of living by the views of groups like Texas Values, the BSA should follow their own teachings that value kindness, courtesy and bravery and open up their membership.