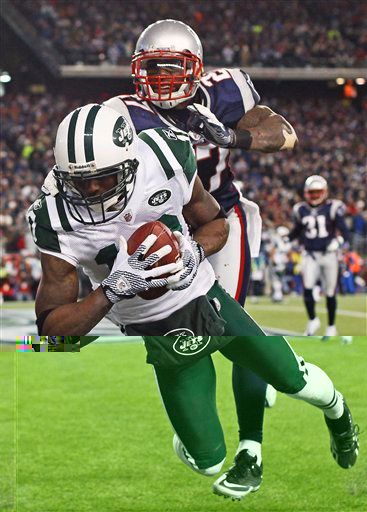 Photo: Santonio Holmes and the Jets shocked the Patriots in Foxborough last week, winning 28-21 and moving on to the conference championship.

Photo: Santonio Holmes and the Jets shocked the Patriots in Foxborough last week, winning 28-21 and moving on to the conference championship.

It's conference championship time, and that means this week will determine who goes to Dallas in two weeks, and who gets sent home. Four of the best defenses in the league remain, with the Packers taking on Chicago and the Jets playing
Pittsburgh.

Last week, Melissa went 3-1 while Eli and Blake went 2-2. It's now statistically impossible for Melissa or Blake to overcome Eli's lead, but hey, it's never over 'til it's SCO-ver!

Green Bay Packers (10-6) at Chicago Bears (11-5)
Blake- Packers
Eli- Packers
Melissa- Packers
Blake says:
The Packers have been the best team in the playoffs so far. Aaron Rodgers has been playing like an MVP quarterback and Green Bay's defense under Don Capers will be too much for the Bears to handle.
Eli says:
You've got to love it when division rivals match up in the conference championship. The Bears pride themselves on their defense, but Chicago will be tested by Aaron Rodgers and his high-powered offense. Both of these teams are used to playing in cold weather, so climate won't be a huge factor. I'm banking on Rodgers continuing his stellar post-season play. Packers win.
Melissa says:
Chicago surprised many fans last week in a strong showing against...the Seahawks. Really, did anyone expect Seattle to beat the Bears anyways? Chicago's got talent on the defensive front no doubt about it, but quarterback Jay Cutler isn't consistent. Packers quarterback Aaron Rodgers has been playing impressively, but the Bears' defense will present him with some problems on Sunday. Both teams have solid defenses that have helped them win games, but in the clutch, it comes down to the quarterbacks. Green Bay has the advantage in Aaron Rodgers and the Pack should be able to get the ‘W,' and make their way to Dallas for the Super Bowl.

New York Jets (11-5) at Pittsburgh Steelers (12-4)
Blake- Jets
Eli- Jets
Melissa- Steelers
Blake says:
New York has been on top of their game. The Jets have exhibited superior offense and their defensive line is nothing to be messed with. This will be a close game, but I'm predicting that the Jets will pull this one out bringing them one step closer to the playoffs.
Eli says:
The Jets talked a ton of smack leading up to last week's match-up with the Pats— and boy, did they back up their trash talk. New York won 28-21, knocking out the top-seeded Patriots. I'll go with the Jets against Pittsburgh this week in a battle of two of the NFL's top defenses.
Melissa says:
After recovering from the shocked state I was in after the Jets beat the Patriots 28-21 last week, I remembered that they had to take on the Steel Curtain this coming Sunday. Jets quarterback Mark Sanchez and the Jets' defense played superbly in last week's win, but they're no match for Steeler quarterback Ben Roethlisberger and Pittsburgh's defense. It won't be a blowout, but Pittsburgh will beat New York and get one step closer to winning their seventh Super Bowl.