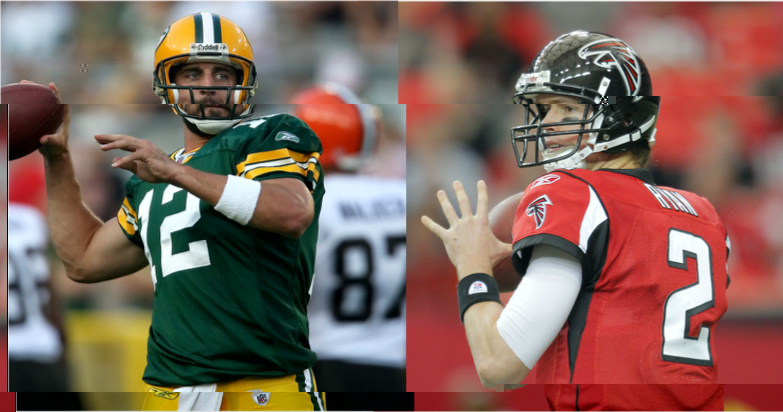 Photo: Packers quarterback Aaron Rodgers and Falcons quarterback Matt Ryan will meet on Saturday night in what looks to be the game of the week. Both are known for their huge offensive production and will be a huge factor in deciding who wins on Saturday.

Photo: Packers quarterback Aaron Rodgers and Falcons quarterback Matt Ryan will meet on Saturday night in what looks to be the game of the week. Both are known for their huge offensive production and will be a huge factor in deciding who wins on Saturday.

Sunday's Wild Card games ended with the Ravens steamrolling the Chiefs, 30-7. The Packers, on the other hand, pulled off an upset in beating Michael Vick and the Eagles 21-16 – reminding us all that anything can happen in the playoffs.

After Sunday's games, our experts looked to the divisional round to determine what would happen next. The Jets are taking on New England in Foxboro, Mass. and the division rivals have been exchanging words all week. Patriots wide receiver Wes Welker even took some subtle jabs at Jets coach Rex Ryan's "hobbies” - check it out Melissa says:
Seattle surprised everyone last week by beating the Saints 41-36. Not many expected the Seahawks to defeat the defending champs in the wildcard round, and coming into this game against the Bears, people are starting to wonder: are the Seahawks for real? But I'm not convinced - the Bears' defense should be able to stop any offensive production by Matt Hasselbeck and the ‘Hawks. If quarterback Jay Cutler gets points on the board, Chicago moves on to the next round.

New York Jets(11-5) at New England Patriots (14-2)
Blake- Patriots
Eli- Patriots
Melissa- Patriots
Blake says:
The Patriots are hungry—especially after hearing all of the trash Coach Rex Ryan and his team have been talking. Tom Brady will fire up the Patriots and look for them to run over New York.
Eli says:
It won't be the same type of blowout, but the Pats beat the Jets 45-3 in week 13—enough said.
Melissa says:
The Jets just barely slipped by Peyton Manning's Colts last weekend with a last minute field goal by Nick Folk. Jets' coach Rex Ryan has been talking trash all week, especially when it comes to Patriots quarterback Tom Brady. Ryan has even called the game "personal” seeing as he'll be playing against Pats coach Bill Belichick. In their last meeting, the Pats demolished the Jets by 42 points and needless to say, Ryan was pretty annoyed. Sorry Rex, it's going to happen again. The Patriots are playing great football and when it comes to playoffs, they've got the experience and talent to win. Brady will once again lead his team to victory.