Tebow is God, God is Tebow, or something 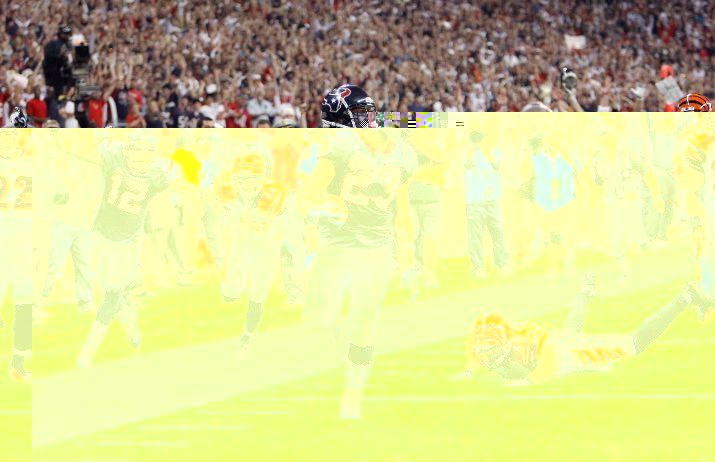 Photo: Arian Foster scores on a 42-yard touchdown run in Houston's win over the Bengals last week. The Texans face Baltimore in the divisional round on Sunday afternoon.

Photo: Arian Foster scores on a 42-yard touchdown run in Houston's win over the Bengals last week. The Texans face Baltimore in the divisional round on Sunday afternoon.

Jeez, that Tebow guy is something.

This weekend we've got more fantastic matchups for your viewing pleasure. Saints v. Niners. Broncs v. Gronks. Texans v. Ravens. G-Men v. Cheeseheads. We're in for another couple days of fun playoff football, and SCO is here for another round of predictions.

How did our four experts weigh in this week? Read up and give us your thoughts in a comment.

Eli says:
Toughest call of the four games. Jim Harbaugh has done a tremendous job in his first year at the helm of the 49ers, leading San Francisco to its first playoff appearance in nine years with one of the stingiest defenses in the NFL. Meanwhile, the Saints are winners of nine straight games dating back to week eight of the regular season. I'm really tempted to go with the 'Niners, but the Saints have been here before and they'll be comfortable on Saturday afternoon despite having to play on the road. San Fran's defense is nice, but it'll have a tough time containing Drew Brees. I'll give the edge to New Orleans because of recent playoff experience.
Langston says:
People keep making a big deal about how New Orleans is only good at home. Well, guess what? They're still 5-3 on the road this year, and they haven't lost anywhere since October of 2011. Drew Brees has already made history, and right now, no team, not even the 49ers, can stop him. Expect a shootout, because the Saints, in addition to being first in passing yards, are also 30th in passing yards allowed, but I will take Drew Brees over Alex Smith in any stadium. Saints win; combined score over seventy.
Jacob says:
This year, ESPN introduced Total QBR as a comprehensive means to rate quarterbacks in substitution of the clearly flawed passer rating. QBR is on a 0 to 100 scale and it is based on many factors that include accuracy, yards, touchdowns, rushing plays, and most importantly, in-game situations that affect the importance of said stats. This season, the team that's quarterback had a better QBR went on to win the game 87% of the time. That makes it a better predictor than total yardage, turnover differential and passer rating. As it relates to this game in particular, Alex Smith had a worse QBR than his opponent in all three of the 49ers' losses this year. Over the whole season Alex Smith's QBR was 46.3, only slightly more than half of Drew Brees' 84. But one could argue that the 49ers don't win because of quarterback play and that it is their defense and their running game that give them the advantage. The problem with that argument is that the Saints ran for more yards and a better average this season than the 49ers. There is no question that the 49ers have the better defense, but the Saints' offense was so good; will it be possible for the 49ers to slow them down? The answer has to be no. The Saints scored at least 20 points in every game this year and over 30 ten times. The fact is that no defense can slow the Saints down, and without enough offensive firepower to keep up, the 49ers just don't stand a chance.
Molly says:
The 49ers have had a good run all season, but the Saints are making a run to advance more and more to the Super Bowl. Drew Brees is not going to let the 49ers put an end to his success.

Eli says:
I've probably been the biggest Tebow lover of our four experts this season, but even I know when to call it quits. The Pats narrowly escaped defeat against Denver in week 16, but I don't think it'll be that close this time around. New England's defense might allow some points, but Tom Brady is bound to take over at some point. Seems like forever since New England's been in the conference championship, doesn't it?
Langston says:
I picked the Broncs over New England in week 16, and I was miserably incorrect. Since then, perhaps I have learned absolutely nothing, because I'm going to pick them again. And it's not as crazy as it sounds! Beating Pittsburgh last week was actually the bigger upset; if Tim Tebow can drop 29 on the Steel Curtain, imagine the unspeakable things he will do to the Patriots' league-worst defense. This will be another shootout because Denver can't really defend, at all, but the Broncos will find a way to win. You can expect to see some Tebowing sometime around 11:30 p.m. Saturday night.
Jacob says:
What Tim Tebow accomplished in the Broncos' playoff win against the Steelers was impressive. He even set the sports tweets per second record with 9,420—over 2,000 more than the previous record, the women's world cup final—not to mention the fact that nine out of every ten Facebook posts the night of the win were #Tebowing. All of that might seem over the top, but Tebow deserves some recognition because it was certainly the most important game of his NFL career and he did throw for over 300 yards with a 125 passer rating. This is not, however, enough to make me disregard both his and his team's performance in their last three games of the regular season in which they scored a total of 40 points. And defensively, Denver gave up 41 to the Patriots alone. And that is why I will be going with the playoff experienced, MVP quarterback in Tom Brady, who threw for over 5,000 yards this season, as opposed to the over-hyped and inconsistent second year QB.
Molly says:
Tim Tebow led his team to an upset against the Pittsburgh Steelers and I believe that he can do it again against the mediocre Patriots' secondary. A team can't rely on Tom Brady forever.

Eli says:
Sorry other-half-of-Blair-that-doesn't-root-for-the-Redskins, I'm not buying the Ravens Super Bowl hype. Joe Flacco doesn't have the killer instinct. The average age for Baltimore's defensive players is probably around 60. Ray Rice is the only real offensive threat. The Ravens might win this game, but don't expect them to go any further. I see the Texans riding Arian Foster to another upset on Sunday with Houston's D playing a big factor in a narrow win.
Langston says:
This AFC matchup will feature the two best running backs remaining in the playoffs. Both Ray Rice and Arian Foster accumulated more than 1,200 yards and ten touchdowns during the regular season. The game will also feature the two best defenses in the playoffs, and two of the top three during the regular season. We'll see a hard-nosed, down-to-the-wire game, which in all likelihood will be determined by a turnover, penalty, or trick play. I give the edge to Baltimore because they have a policy of not losing at home, ever, and because Rice is a slightly better all-around back than Foster is. The Ravens advance to the AFC Championship.
Jacob says:
The first week of the playoffs was by far my worst week of the year in terms of predictions, and I'll admit that I was very surprised that the Texans were able to beat – let alone blow out – the Bengals. However, the Ravens are a different team. Not only did the Ravens beat the Bengals twice this year, and the Texans once, but the Ravens are playing at home and they did not lose a game at home all year. That was certainly not because of strength of schedule as those home wins included victories against the Steelers, Jets, Texans, Bengals and 49ers. The Texans were able to rely on their run to carry them past Cincinnati but that will be much harder against the NFL's number one rush defense in average yards per carry and number two in total rushing yards allowed. That leaves it up to rookie TJ Yates against the NFL's sixth best passing defense. Flacco & co. might have trouble offensively against the stellar Texans' defense, but they can grind out a win at home.
Molly says:
The Ravens have officially begun their run for the Super Bowl, and they have to stay motivated to make it there. Joe Flacco will be completely on his game with his powerhouse defense running right over the Texans.

Eli says:
1) I can't stand the Giants.
2) Aaron Rodgers.
3) This guy.
Langston says:
This game will not be as close as some expect it to be. Though the Giants nearly managed a win at home in week 13, Green Bay is still the most talented team in the league. Coming off a bye week will benefit some of their aging players with nagging injuries, and all Aaron Rodgers has to do for a win is to be Aaron Rodgers. While New York's defense embarrassed the Falcons last week, you can expect the Packers to put up a few more than two points. Green Bay moves on to the NFC Championship next week.
Jacob says:
It is interesting how from a statistical viewpoint how similar these two teams are, yet one ended 15-1 while the other needed a win on the last day of the season in order to even put them in the playoffs. The Packers are third in passing yards, while the Giants are fifth. The Packers are 27th in rushing yards, while the Giants are dead last. The Packers have given up the most passing yards of any team in the NFL, while the Giants have given up the fourth most. Finally, the Packers gave up the 14th most rushing yards, while the Giants gave up the 19th most. These two teams are within six spots of each other in all four of these categories often deemed the biggest markers of defensive and offensive play. The major difference comes with a more important stat, in fact the most important stat—points. Regardless of how many yards you gain or give up, if you don't score points, you don't win. The Packers scored the most points in the NFL at 560, which is 166 more points than the Giants scored. Aaron Rodgers is the king of efficiency. He ended the season fifth in the NFL in passing yards, yet he still may have had the best season ever for a quarterback. He set the record for both QBR and passer rating, and his 45 touchdowns to 6 interceptions is incredible. He may not be have thrown for the most yards or the most touchdowns, but when the Packers need to score, they know that they can and that is thanks to Aaron Rodgers.
Molly says:
AARON RODGERS IS UNSTOPPABLE...so far. He is definitely going to be able to beat the Giants, and although the Manning brothers have a wonderful reputation, Eli isn't going to be able to compete.