The Redskins' season is over, and now the spotlight switches to the Ravens, who take on the top seeded Broncos in Denver. The Ravens are huge underdogs, but they proved a lot int their big win over Indianapolis last week. Meanwhile in the NFC rookie quarterbacks Russell Wilson and Colin Kaepernick take on established quarterbacks Matt Ryan and Aaron Rodgers.

In the SCO Standings it is now official, Jacob has won for the second year in a row. It is now just a battle for second place. 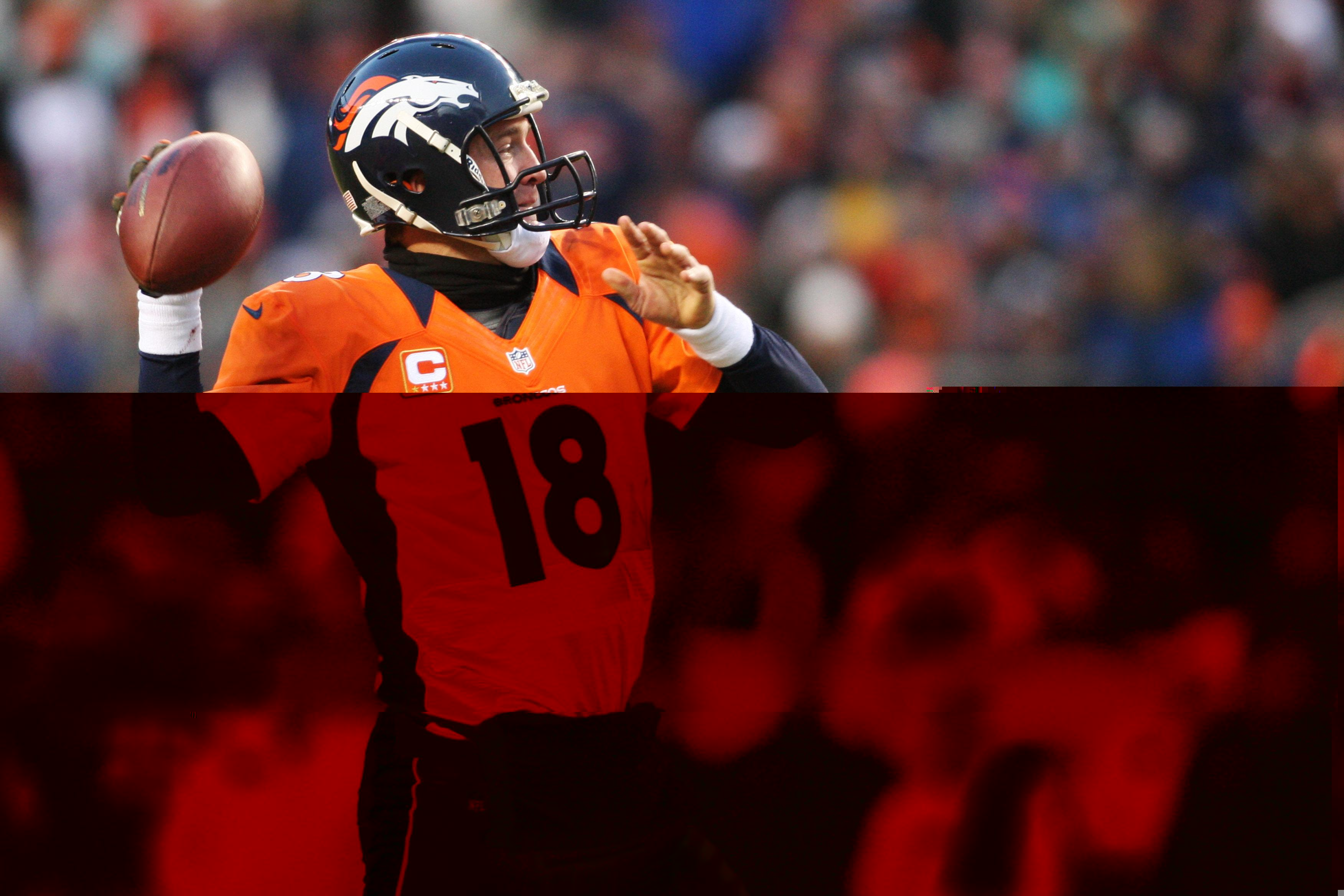 Photo: Manning leads the Broncos against the Ravens.

Photo: Manning leads the Broncos against the Ravens.

Jacob says:
I wish I could take the Ravens but I don't see any scenario in which they knock off the Broncos. The Broncos got all the attention for their explosive offense led by Peyton Manning but their defense was actually ranked second in the NFL. Von Miller and Elvis Dumervil can get to the quarterback better than anyone the Ravens have. Peyton will have no trouble out playing Joe Flacco. Ray Rice and Bernard Pierce certainly give the Ravens the advantage in the running game but once the Broncos take the lead the Ravens are going to be forced to throw the ball.
Jack says:
Although the Ravens looked sharp in taking down the Colts last week, their season will end in Denver. In the regular season, Denver was one of the most statistically sound teams in the league, boasting the 2nd best scoring offense and giving up the fourth fewest points per game. Led by defensive end Von Miller, the Broncos defense will make it a long day for inconsistent Ravens quarterback Joe Flacco. Miller finished with 18.5 sacks on the season, good for third best in the league. Although the Ravens offense did look good last week, that was against the Colts, who give up the seventh most yards per game in the league. This one won't be close, and Peyton Manning will continue his march to his 3rd career Super Bowl.
Michael says:
I wanted to pick the Ravens in this game, but I just can't. I hate to see Ray Lewis leave the league like this, but Peyton Manning and the Broncos are just too good. Denver has been on a winning streak for I don't even know how long and they seem to have finally meshed on offense. Peyton Manning has total control of the offense and he makes everyone else significantly better. The Ravens looked a little sloppy on offense against the Colts in the wild card and if they come out with that against Denver, they will get dominated. This Denver defense is a lot better than people think. They combine young talent like the sack machine Von Miller with veteran experience like shutdown corner Champ Bailey. Ray Lewis will have his team fired up, no doubt about that, but one player can only do so much, even if that player is Ray Lewis. I like the Broncos over the Ravens at mile-high.
Josh says:
With Peyton Manning at full strength and a top tier defense backing him up, it's hard to see Denver falling, especially at home. Joe Flacco isn't consistent enough to keep up with Manning, and with the Ravens' defense not what they used to be, they won't be able to even slow down Denver's attack. Expect a repeat of the two teams' previous matchup where Denver dominated Baltimore.

Jacob says:
This Packers team looks a lot like the team that won the Super Bowl two years ago. Their defense is still anchored by Clay Matthews, B.J. Raji and Charles Woodson. They still have the best group of receivers in the league with Greg Jennings, Jordy Nelson, James Jones, Randall Cobb and Jermichael Finley. And of course, Aaron Rodgers is still at the helm. The 49ers are by all means a very good team. Their defense is great and their offense can be explosive. But the Packers are a Super Bowl team and anything short of that would be a failure.
Jack says:
Facing the stout San Francisco run defense, Aaron Rodgers will have to win this one all by himself. Luckily, this has not been a problem for Rodgers this year, as he led the Pack to a NFC North title with just the 20th ranked rushing attack in the league. Look for Rodgers to air it out north of 40 times this game as the rest of the Packers ride him like a bronco. Collin Kaepernick will be overwhelmed in his first career playoff game, and I expect Alex Smith to get some kind of action in this one. In addition San Francisco has been inconsistent over the past month. They looked like the best team in the league after throttling the Patriots on December 16th, and then proceeded to get blown out by the Seahawks the following week. The 49ers had plenty of other head scratchers this year, failing to beat the Rams and getting thrashed by the Giants. Aaron Rodgers is simply better than the young Kaepernick, and the 49ers will exit early in this year's postseason.
Michael says:
Look for San Francisco to shock Green Bay at Candlestick. The 49ers will be ready for the potent Packer offense coming off a first round bye. Aaron Rodgers is one of the best QB's in the game and has a lot of receivers, but their offense remains one-dimensional. The Packers have not had a 100-yard rusher in TOO LONG. Their leading rusher has just over 450 yards on the season (Alex Green). The 49ers have the number one defense in the league. A one-dimensional offense like the Packers' will not be able to get much done against the league's top defense. San Francisco QB Colin Kaepernick is the guy. He definitely adds another dimension to this offense to go along with their outstanding running back, 1200-yard rusher, Frank Gore. I give San Fran the edge over Green Bay.
Josh says:
This game has potential to be the best game of the season as Green Bay has the potent offense going up against San Fran's ball hawking defense. This game will come down to how Colin Kaepernick deals with the playoff atmosphere and pressure that will be put on him. It's just hard to pick against Aaron Rodgers and his receiving corps. In my opinion, whichever team wins this game will end up in the Super Bowl representing the NFC.

Jacob says:
The Falcons are possibly the least favored number one seed I have ever seen. They have been the top seed in the NFC all year long and they finished with the best record in the NFL and yet everyone seems to think the Seahawks are going to win. The Seahawks had a couple of huge wins to finish the season and they just knocked off the Redskins in week one of the playoffs. But that does not make them elite. They only won by ten against a team whose star quarterback, a running quarterback, was playing with multiple torn ligaments in his knee. The Seahawks are a great home team and an above average road team. But the Falcons are much better than average and they are playing at home. It's time for Matt Ryan to win a playoff game.
Jack says:
The Seahawks are one of the hottest teams in the league right now, and they will knock off the favored Falcons. The Falcons have one of the best receiving corps in the league, led by Roddy White and Julio Jones. But these Falcons have never seen a group of cornerbacks like the Seahawks have to offer. Seahawks cornerbacks Richard Sherman and Brandon Browner are two of the biggest and baddest defenders in the league. I expect the dynamic duo to shut down the Falcons' passing offense, and Matt Ryan will put up another playoff dud. Atlanta's 21st ranked run defense will be sliced apart by Marshawn Lynch, one of the most feared backs in the business. When the dust settles, Russell Wilson will have pieced together another solid outing, and Seattle will be boarding the next plane to Green Bay.
Michael says:
I know many would pick the red hot Seahawks in this game against the supposedly struggling Falcons, but I like Atlanta. First off, the game is in Atlanta, where the Falcons have had one of the best home records. In addition the Seahawks posted a hearty 3-5 record on the road this regular season. Atlanta has had plenty of time to prepare coming off the first round bye, and is well rested and well prepared for what Seattle will throw at them. Seattle last week was lucky to be playing against an injured RGIII. RGIII makes or breaks the Redskins' offense. His game play opens up the field for Alfred Morris and in turn, Alfred Morris opens up the field for RGIII. The fact that RGIII was clearly laboring through severe pain, and should not have been playing, played to the Seahawks' advantage. It could have been a different game had RGIII been healthy and the dynamic player that he is. I expect the underestimated Atlanta defense to slow down Seattle and take the W at the Georgia Dome.
Josh says:
This one is really quite simple: the Falcons won't be able to stop the Seattle pass rush. With Matt Ryan getting pressured all day, he'll be forced into bad decisions and therefore turnovers. The run of this Seattle team will lean heavily upon their defense, and against the Falcons, they'll be able to get it done. NFC Championship game, here they come.

Jacob says:
This will be the blowout of the weekend. In fact, it will probably not even be fun to watch. Tom Brady, coming off of a bye, against a mediocre Texans team. This year the Texans became a very good team but they are still not at the level of the Patriots and the Broncos. That was made clear by their 1-3 finish to the season dropping them from the top spot in the AFC all the way to the third spot.
Jack says:
Matt Schaub is ice cold, having thrown for one touchdown in his past five games. This kind of play will not be enough to keep up with Tom Brady and the high powered Patriots offense. The Patriots ranked fourth in the league in passing yards per game, and they will explode on the sixteenth ranked Texans secondary. And don't forget what happened last time the two met, when the Patriots flattened the Texans in one of the biggest blowouts of the year. The fact is, Houston is playing without a quarterback right now, and that is not enough to get it done against the blue blood Pats.
Michael says:
This game is definitely the easiest to pick. The Texans looked bad against the Bengals last weekend, the Bengals were just worse. I expect Tom Brady and the league's highest scoring offense to dominate Houston this weekend. Now I do give credit to the Texans' defense for holding Andy Dalton to around 100 yards passing, but Tom Brady is not Andy Dalton, the Patriots receivers are not the Bengals' receivers, the Patriots' O-Line is not the Bengals' O-Line. Also, the Texans could not get anything going on offense against Cincy either. Houston cannot expect to outscore the league's best offense with that kind of effort. The Pats roll in Foxborough.
Josh says:
This won't be the cupcake game that many Patriots' fans believe it will be, but it the Patriots will be able to pull it out. The Houston defense won't be able to stop Tom Brady and the Gronk/Hernandez attack. On the other side of the ball the Patriots will be able to stop Arian Foster and Matt Schaub. With this win Tom Brady enters the record books as the winningest quarterback in playoff history. Congratulations Tom.