Green Bay, Pittsburgh duke it out in Dallas

After an exciting year of NFL action, two of the most storied NFL franchises, Green Bay and Pittsburgh, will go head-to-head to see which team holds football supremacy in 2011. Super Bowl XLV is sure to be a good one with two teams of differing styles – the Packers are stacked with offensive firepower while the Steelers pride themselves on their hard-hitting defense. 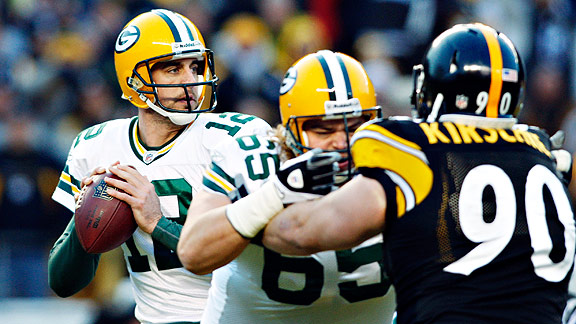 Photo: For two of our pundits, Green Bay's QB Aaron Rodgers will make all the difference in today's game.

Photo: For two of our pundits, Green Bay's QB Aaron Rodgers will make all the difference in today's game.

Blake says:
The weather in Dallas may be dreary, but the atmosphere is ripe for football. Come Super Bowl Sunday, Dallas will provide some stormy weather, but it will be Green Bay that brings the thunder.

Both teams have a lot to prove come Gametime. Fighting rumors and allegations off the field, Pittsburgh's quarterback Ben Roethlisberger returned to the league and gives the Steelers an offensive edge. On the other side of things, the Packers have found hope in quarterback Aaron Rodgers. Green Bay's offense has maintained a competitive edge under the leadership of Rodgers, who will be looking to further prove himself come Sunday.

This will definitely be a close game, mostly because both teams have top-notch defenses. Although Pittsburgh's defense is notorious, the Pack is hungry for Roethlisberger. Green Bay can't be too proud of their twenty-two turnovers for the season; however, damage was minimal, as they have only resulted in three touchdowns for their opponents. Pittsburgh's center Maurkice Pouncey is out with an ankle sprain, which is bad news for the Steelers. If the Pack defense can demonstrate the same ruthlessness they demonstrated in their win over the Bears, Pittsburgh has reason to worry.

Eli says:
Two words express why Green Bay fans will sleep well on Sunday night: Aaron Rodgers. As good as the Steelers "D” has been, Rodgers is hungry for that title and knows he needs the W to move into the elite quarterback discussion. After dominating both the wild card and divisional rounds with six combined touchdowns, Rodgers had a minor hiccup against the Bears in the conference championship with two picks and no passing touchdowns. But the sixth-year quarterback still managed to will his team to a 21-14 win, showing that the Packers can get it done even when their star quarterback has his struggles. Rodgers also showed his mobility as he eluded Chicago defenders en route to a first-quarter one-yard touchdown run. He'll need to use that same type of elusiveness tomorrow against a feisty Steeler defensive line.

There's always talk about the Pittsburgh defense – Polamalu, James Harrison, the whole gang – but let's not forget that Green Bay boasts one of the league's top-tier defenses as well. Clay Matthews and BJ Raji, despite their inexperience, make big plays game in and game out and will make things tough on the Steeler offense. As tough as it is to take down Big Ben, I see the Pack defense doing a lot of damage. Charles Woodson is a seasoned vet who shows up in key games—don't be surprised to see him come up big tomorrow.

Regardless of the outcome, it'll be a close game. The current line is Green Bay by three, so expect this one to come down to the wire. Pittsburgh's center Maurkice Pouncey was just placed on IR, a big blow to the Steel City's offensive line—and I think that pushes it over the top for the Pack. Rejoice, Cheeseheads!

Melissa says:
Roethlisberger v. Rodgers. Once again, the Super Bowl comes down to which quarterback has enough in him to lead his team to victory. However, after the game against the Bears, it is obvious that Aaron Rodgers can be stopped. After all, Rodgers only scored one touchdown—rushing—against Chicago's defense. The Steel Curtain will be able to limit offensive production by Rodgers, causing all sorts of problems for Green Bay's offense.

The defenses for both of these teams are solid and have proven themselves this season and will definitely be a huge part of Sunday's game. The Steel Curtain is stocked with players such as linebacker James Harrison and cornerback Troy Polamalu delivering hard hits weekly. Without adequate protection, Rodgers will encounter tons of issues dealing with Pittsburgh's defense. Roethlisberger's height and strength give him an advantage over Rodgers and will also make it harder for the Packer defense to bring him down. Even if standout defensive players like Charles Woodson and Clay Matthews are able to stop Roethlisberger, Green Bay will still have a hard time stopping production by Steelers running back Rashard Mendenhall, who averages 3.9 yards per carry.

It's been said all year that Roethlisberger's numbers have been low; against the Jets, he only completed 10 of 19 passes and has only thrown for 17 touchdowns this year. When compared to Rodgers' 28 touchdowns, the number seems minimal. But Roethlisberger and the Steelers, even with low offensive production, have been able to get the job done all year. With three Super Bowl rings already in his possession, Roethlisberger will win his fourth Super Bowl and gain (some) redemption for his off-season antics.