Heading into week fourteen, the race remains tight. Jacob has a five game lead over his brother Sam, who is in second place. Abel and Rohan are also not too far behind. The standings go as follows: 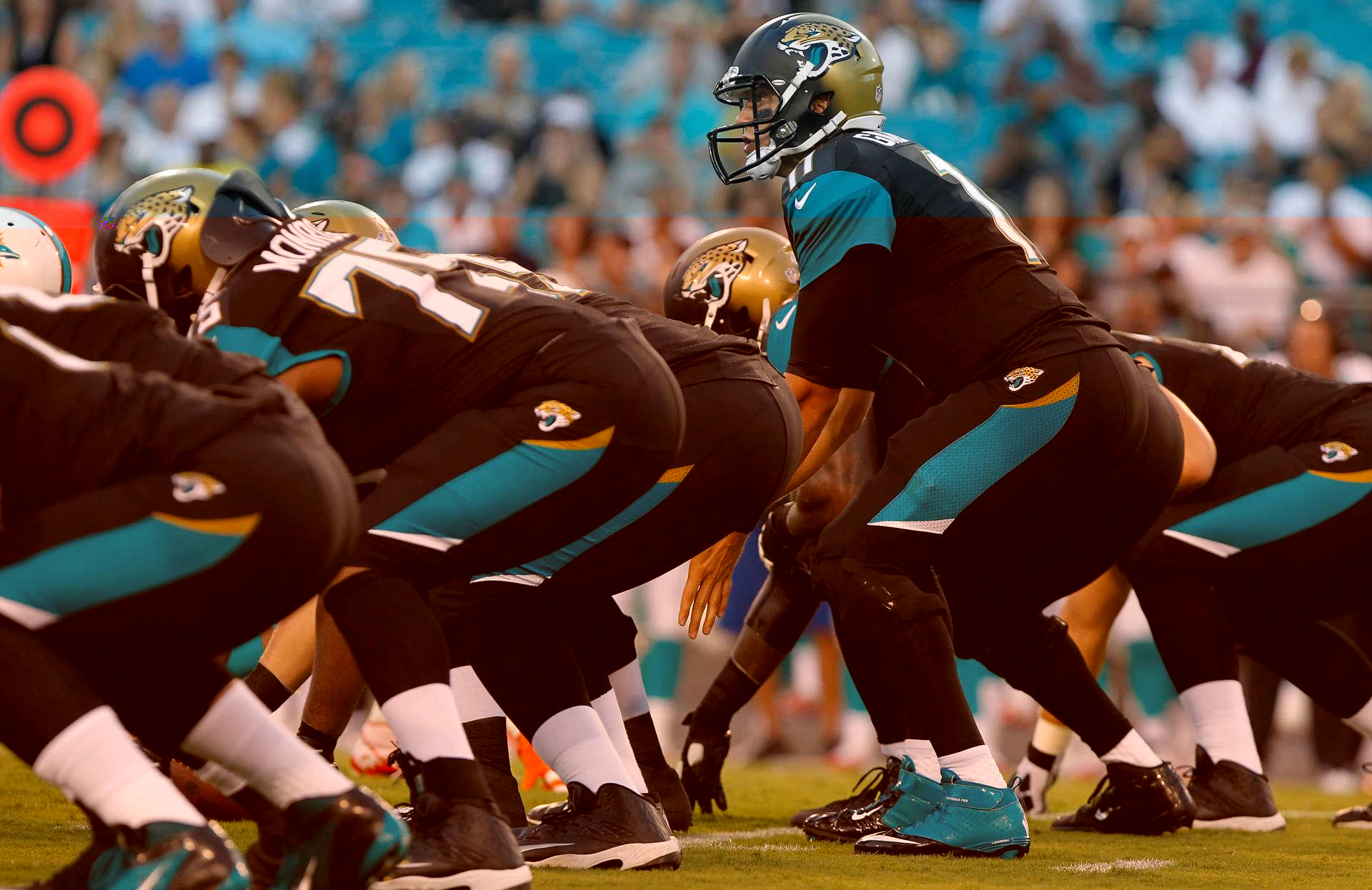 Photo: The Jaguars, after a horrid start to the season, have a little hot streak going.

Photo: The Jaguars, after a horrid start to the season, have a little hot streak going.

Jacob says: The Jags are looking significantly better than their horrid start. Plus the Texans are probably the new worst team in football. That's not clutch.
Sam says: While the Jaguars have been 0-5 at home, the teams they've played at home are a combined 37-23. That's a tough home schedule. Give me the upset with the hot hand in Jacksonville.
Abel says: I still refuse to pick the Jaguars.
Rohan says: Although the Jaguars won last week, they are just not good enough to beat this Texans team.

Jacob says: The Bills will have the edge in Tampa this week.
Sam says: The Bills will be horrid offensively and turn the ball over in this game. Their unbelievable defensive line, however, will win this game for them.
Abel says: Bobby Rainey will help neutralize the Bills pass rush with a good game running the ball. I also like Mike Glennon and his weapons more than EJ Manuel and his supporting cast.
Rohan says: The Bills have looked terrible as of late and the Bucs will take advantage of this and win the game.

Jacob says: I will take AP over Ray Rice in this snowy game.
Sam says: In a snowy game you need to run the ball and play defense because the passing game will struggle in the snow. It's a good thing the Vikings can't pass anyways and they have AP.
Abel says: I've got Adrian Peterson on my fantasy team, and for the sake of my playoff game, I hope Sam is right about the running game. Still, the Ravens are the better team and should win it at home. I also like Joe Flacco's arm strength to drive the ball in poor weather and Torrey Smith to toast the Vikings' secondary.
Rohan says: The Vikings have gone to overtime in their last two games and because of this added fatigue, I think the Ravens will be able to win this one.

Jacob says: You've got to take the Browns in the upset against the bad defense of the Pats.
Sam says: Josh Gordon is playing well for the Browns. That's about it.
Abel says: Same old Patriots...
Rohan says: The Browns are just not a good team. Expect them to lose to the Patriots in this one. Tom Brady should have a field day.

Jacob says: Andrew Luck and the Colts will get back on a winning streak after an upset in Cincy.
Sam says: All of a sudden the Bengals are working into that elite AFC group along with the Broncos, Patriots and Chiefs.
Abel says: Solid defense, good running game and playing at home in inclement weather. The Bengals qualify for all the above.
Rohan says: The Bengals have become a good team this year but let's not forget who their QB is. In my opinion Andy Dalton just does not make the cut for a quarterback trying to lead an elite team. On the other hand, Andrew Luck is a QB with tremendous skill who will lead his team to victory in this one.

Jacob says: These two teams are evenly matched, plus with big snowstorms expected, kicking in overtime will be very difficult.
Sam says: The outside running game, where DTs Nick Fairley and Ndamukong Suh cannot help out, will hurt the Lions.
Abel says: I like Matt Stafford and Megatron to tear it up. The Eagles got away with some questionable tactics in the secondary last week, but they don't have the talent to slow down Calvin Johnson. I just have a gut feeling that the Lions, particularly their quarterback, will step up.
Rohan says: The Lions will end the Eagles run and in the process intercept Nick Foles at least once. With Megatron, the Lions should win this one.

Jacob says: The Falcons suck, but I will never trust Green Bay without Aaron Rodgers.
Sam says: No Aaron Rodgers, no problem…. well for the other team.
Abel says: I'll go with the Packers just because they're at home and have had ten days to work on their quarterback issues.
Rohan says: Coming off of a win, the Falcons will want to end the season in high fashion after their torrid start. The Packers are also a perfect team to win against. Expect the Falcons to take advantage of this and win the game.

Jacob says: The Redskins can salvage a little bit at home against the skidding Chiefs.
Sam says: RGIII has struggled to pass this season when defenses expect passing. With the slippery, snowy conditions, he will struggle throwing even more.
Abel says: I've probably said this before, but the Redskins are a mess.
Rohan says: The Chiefs are fortunate to encounter the Redskins who are just imploding as a team. RGIII has not been able to lead this team to victory in recent weeks and this trend will repeat in this game.

Jacob says: Miami still has their off the field issues, which is why I'm picking Pittsburgh.
Sam says: I love the matchup of WR Mike Wallace against CB Ike Taylor. It will determine the outcome of the game, and I like Taylor.
Abel says: Bring out the peanut butter and jelly because Ike Taylor is toast. Mike Wallace is back in Pittsburgh for his revenge game, and I think he'll be burning Taylor and his former team on Sunday.
Rohan says: I'm going out on a limb when I pick the Steelers here, but I think they can pull off a win against the Dolphins who really have not impressed me.

Jacob says: The Broncos' number one ranked offense will be too much for the Titans to handle.
Sam says: Nothing against the Titans, they are just playing a better team. However, this will be a closer game than most expect, I'll say that.
Abel says: It's hard to go against the Broncos at home against an inferior opponent.
Rohan says: The Broncos showed their dominance last week and they will continue to demonstrate this performance against a Titans team that has fallen off of its early season form.

Jacob says: Eli Manning will lead the G-men to a win against the team that drafted him.
Sam says: Philip Rivers is doing a great job of slinging the ball around and against a weak Giants secondary, it should be easy pickings.
Abel says: This is a lot harder game to pick than our consensus selections would suggest. I guess I'm just going with the hotter quarterback in Philip Rivers.
Rohan says: Now that desperation is in the air for the Chargers, they need a win so they will make the playoffs and I don't see how the Giants can stand in their way.

Jacob says: Everyone is too high on Seattle.
Sam says: It's unbelievable to believe that the Seahawks made the biggest statement in the NFL all season last week and are still a popular pick to be upset.
Abel says: There is a huge let down possibility for the Seahawks here. It's hard to get up for back to back big games, even if it is against your biggest rival. The Seahawks are also away from home, which apparently has been their biggest advantage. They're missing a couple guys in the secondary, which will help the 49ers passing game, and the 49ers are playing for pride after being punked by the Seahawks in big games the last few contests.
Rohan says: In this one I just feel like the Seahawks can win if the 49ers do not show up. Conveniently for Seattle, they haven't shown up very many times this season.

Jacob says: Arizona is fighting for its playoff chances and have a 5-1 record at home.
Sam says: The Cardinals are hungry and a great team at home.
Abel says: The Rams have perfected the art of the upset and could steal this one. But the Cardinals play at a different level when they're at home.
Rohan says: Although the Cardinals let me down last week, I believe that they will beat the Rams who are usually poor away from home.

Jacob says: The Saints will explode past a strong Panthers D on the back of Drew Brees who will be inspired to avenge his mediocre performance last week.
Sam says: The Saints are still my Super Bowl pick, just throwing that out there.
Abel says: Drew Brees in the Superdome coming off an embarrassing loss? Give me the Saints.
Rohan says: I know Cam Newton is leading the Panthers to a new era, but I am not going to take a chance in them beating the Saints, who after getting spanked by the Seahawks will try to get a good result. Drew Brees will lead his team to victory in this one.