Tricks, treats, and a whole lot of football 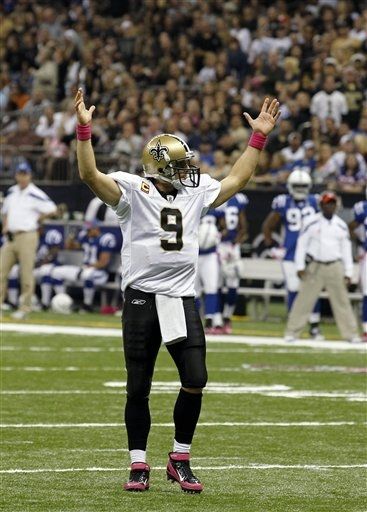 Photo: Drew Brees had plenty of opportunities to celebrate last Sunday night, as the Saints hung 62 points on the Colts.

Photo: Drew Brees had plenty of opportunities to celebrate last Sunday night, as the Saints hung 62 points on the Colts.

The Saints put up 62 points on the Colts in week seven. 62. Forget ghosts, monsters and zombies – the Colts' defense was most afraid of Drew Brees and his rocket arm last Sunday. The veteran QB threw for 325 and five scores while New Orleans obliterated the winless Colts. Meanwhile, rookie running back Demarco Murray busted out for a franchise record 253 yards for the Cowboys as Dallas cruised to a 34-7 victory over the Rams.

Week eight should offer plenty of excitement with match-ups like Steelers-Patriots, Cowboys-Eagles and Saints-Rams (okay, maybe not that last one.) Kick back, relax, grab some candy and check out Sunday's games.

Eli says:
New Orleans just beat the Colts 62-7. 'Nuff said.
Langston says:
The Saints won't put up 62 again this week, but they'll be pretty close.
Jacob says:
Last year was supposed to be the beginning of a new team in St. Louis, but 0-6 so far this year, sounds just like the old Rams. Meanwhile the Saints are on top of one of the best divisions in football after scoring 62 against Indy.
Molly says:
The St. Louis Cardinals may have won the series, but I can't say the Rams are going to have the same outcome against the powerhouse Saints this week.

Eli says:
Matt Schaub threw for 296 yards and two scores last week even without Andre Johnson. Houston's run game was on display as well, as Arian Foster rushed for 115 yards and two touchdowns on 25 carries. The Texans will cruise to their fifth win thanks to their balanced offense.
Langston says:
Jacksonville didn't win its game against Baltimore last week; the Ravens lost it. Arian Foster has been on a roll and the Texans will win again in Houston.
Jacob says:
Even though they pulled out a 12-7 win against the Ravens, Jacksonville's defense can't hold Houston in check.
Molly says:
The Jaguars may be coming off a win against the Baltimore Ravens, but their offense couldn't even score a touchdown against the tired Ravens defense. The Texans seem to be on a roll, and they are sure to have a repeat week against the Texans.

Eli says:
Tough one. Minnesota kept it close against the Packers last week, while Cam Newton led the Panthers to a victory against Washington. I'll give Carolina the slight edge.
Langston says:
Christian Ponder's debut went surprisingly well as the Vikings took an early lead in Green Bay, only to be caught by that Aaron Rodgers guy. Minnesota's defense will frustrate Cam Newton and the Panthers will fall to 2-6.
Jacob says:
The Panthers are 2-2 at home and coming off an important win against the Skins. Christian Ponder was good with the Vikings but Newton will come out on top.
Molly says:
Cam Newton is on fire, and blazing his way to be offensive rookie of the year, so Christian Ponder has a lot to live up to this week.

Eli says:
Baltimore played extremely un-Baltimore-like in week seven, falling to the Jaguars 12-7. The Ravens will bounce back against the 1-5 Cardinals.
Langston says:
Although it seems that the Ravens don't know how to beat bad teams, I cannot expect them to lose back-to-back games against the Jags and Cardinals. The offense should return this Sunday.
Jacob says:
They have shown an inability to beat bad teams so far, but a loss to the Cardinals would be a new low. Baltimore will bounce back in week eight.
Molly says:
Unless the Raven offense takes it easy this week like they did last week, there's no way Baltimore won't win this game. Cam Cameron better step it up this week and take advantage of the Raven running game.

Eli says:
Houston put a 41-7 beating on Tennessee in week seven. The Titans will have the perfect opportunity to turn things around on Sunday when they face the winless Colts at home.
Langston says:
I don't understand how Peyton Manning's absence has made the Colts' defense so bad. At this rate, they're not going to beat anybody.
Jacob says:
The Colts gave up 62 last week.
Molly says:
This is such a toss-up game, but the Titans seem to suck less right now. Plus, they probably will feel a need to rebound after last week's loss against the Texans.

Eli says:
The Giants will have a field day against Miami's horrendous defense.
Langston says:
Miami managed to squander another game last week, giving up a 15-0 fourth quarter lead in an overtime loss to the Broncos.
Jacob says:
Miami had its first win of the year in the bag, but Tim Tebow's heroics won it for Denver. The Giants aren't bad enough to give Miami a win.
Molly says:
The Dolphins' defense will not be able to keep up with the Giants' passing game.

Eli says:
The Lions have lost two straight. They'll turn things around on Sunday with a big win over Tim Tebow's Broncos.
Langston says:
I just don't understand Tim Tebow. By all standard measures, he's not a good quarterback. Last week, he completed fewer than half of his pass attempts, yet still gets credit for the win. It's clear that his teammates enjoy playing with him, yet at least one Denver coach considers him the fourth-best QB on the team. I don't think his success will continue, but at this point, who knows?
Jacob says:
I really want to go with Tebow, but I can't get over the fact that he is really, really bad. He does have an uncanny knack for winning, but the Lions will pull through.
Molly says:
Matt Stafford needs to prove to fans everywhere that the Lions can rebound back to something similar to the beginning of their season. I don't think they will continue on this losing streak.

Eli says:
Maybe I should stop picking the 'Skins… oops!
Langston says:
Plagued by injuries and straight-up bad quarterbacks, Washington doesn't have much of a chance against Buffalo.
Jacob says:
The Skins have some serious problems at quarterback and the Bills' explosive offense can overpower the solid Redskins D.
Molly says:
The poor Redskins…

Cincinnati Bengals at Seattle Seahawks
Eli: Bengals
Langston: Bengals
Jacob: Bengals
Molly: Bengals
Eli says:
The Bengals are 4-2? Whaaaat?
Langston says:
At 4-2, the Bengals have enjoyed surprising success so far, while Seattle has struggled with a tough schedule. Given that they couldn't handle Cleveland at home last week, I don't expect them to fare much better against the bye week-rested Bengals.
Jacob says:
The three points Seattle put up last week were impressive, but for some reason I'm going to have to go with Cincy.
Molly says:
The Bengal defense continues to impress, so the Seahawk offense has no chance.

Eli says:
This'll be a good one. I'm banking on Tom Brady getting things going through the air. Pats win.
Langston says:
New England has scored twenty or more points in every one of its games. Pittsburgh hasn't given up more than twenty since its week one loss in Baltimore. Game of the week! The Steelers will manage to contain Tom Brady enough for a win this Sunday, though winning two in a row against New England and Baltimore (next week) won't be easy.
Jacob says:
Both teams are on three game win streaks and sitting on top of their respective divisions. Both teams are also undefeated at home so I'm going to take the Steelers in Pittsburgh.
Molly says:
The Patriots seem to be living up to the high expectations set for them this season, while the Steelers defense seems overrated compared to their hype. So the match-up between these two teams will lead to a Patriots win.

Eli says:
The 'Niners are 5-1 and coming off a bye week. The Browns have trouble putting points on the board and won't be able to keep up with San Fran's rejuvenated offense.
Langston says:
Jim Harbaugh and the 49ers are rolling. Their wins over Tampa Bay and Detroit have been legit, and San Francisco is in good shape to win the NFC West (though finishing above Seattle, Arizona, and St. Louis won't be the most difficult task in the world).
Jacob says:
San Francisco is one of the better teams in the NFL right now. The 49ers established themselves in week six with a road win against the Lions.
Molly says:
With Frank Gore, The 49ers have this one in the bag.

Eli says:
Hate both of these teams, but I'll admit the 'Boys looked solid in a 34-7 derailing of St. Louis in week seven.
Langston says:
Sorry Philly, beating Washington isn't that impressive. Dallas gets the W.
Jacob says:
The Eagles are ready to step it up and play like they should.
Molly says:
This game is going to be back and forth, but after the Eagles' performance against the Giants, I think they can really pull this one out. Vick is going to deliver.

Eli says:
Philip Rivers throws for 250 and two TDs and the Chargers get back on track.
Langston says:
Philip Rivers bounces back from a less-than-stellar performance against the Jets to take one in Arrowhead.
Jacob says:
ESPN made a serious mistake putting the Chiefs on Monday Night Football. The Chargers win in a blowout.
Molly says:
The Chargers barely beat the Chiefs during the first match-up between these two teams, and the Chiefs have definitely improved, seeing that they haven't lost since. Kansas City is going to have a redemption game this week.