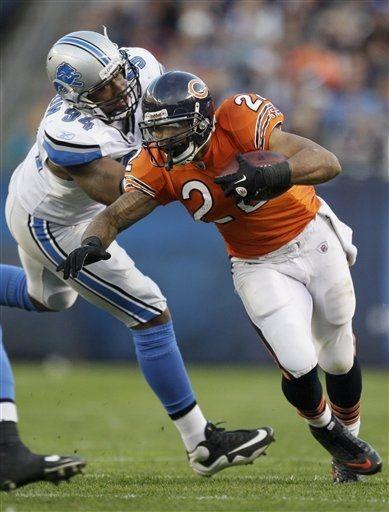 Photo:
Last week, we saw the Saints escape the Georgia Dome with a 26-23 overtime victory; meanwhile, the Bears extended their win streak with a 37-13 beatdown on Detroit and Green Bay remained perfect with a 45-7 win over Minnesota on Monday night.

Week eleven is highlighted by two NFC East matchups: Skins-Cowboys and Giants-Eagles. While Washington has struggled to put points on the board as of late, it's always fun to watch (arguably) the biggest rivalry in football in action.

Jacob continues to outshine the rest of our experts. Let's see if he can keep it up.

Langston says:
The Broncos won't win for long if Tim Tebow is only completing two passes a game.
Jacob says:
The Jets looked pretty bad against the Patriots, but Tim Tebow's two for eight performance wasn't spectacular, either. The Jets' defense can tear up Tebow, and if the Broncos have any chance, it will be because of the Jets' helplessness on offense.
Molly says:
Although the Jets' defense isn't the best, I think they will be able to hunker down and New York will steal this win from the Broncos.

Langston says:
Matt Stafford and Detroit turn it around and beat a struggling Panthers team.
Jacob says:
I'm not sold on the Lions as being a true competitor in the NFC. They are surely better than the Panthers though, and week 11 should be an easy week for the Lions.
Molly says:
The Lions are definitely going to be able to bounce back from last week's loss.

Langston says:
The smart money, as always, is on Aaron Rodgers.
Jacob says:
No one can beat the Packers. It's as simple as that.
Molly says:
I'm thinking you can figure this one out for yourself, but I'll spell it out just in case. P-A-C-K-E-R-S O-N-C-E A-G-A-I-N.

Langston says:
It hurts me to make this pick, but Washington has suffered too many injuries to turn it around at this point. But the Skins should continue to start Rex Grossman; even he's better than Beck.
Jacob says:
It was real close the last time these two teams played, but unfortunately for Redskins fans, there will be no such luck this time. It will be a blowout in every facet of the game, as the Cowboys are establishing themselves as a force in the NFC East.
Molly says:
The Cowboys killed the Bills last week, and the Redskins definitely need a new quarterback, let's just be real.

Langston says:
The Dolphins have had better luck recently, but their only wins have been over Kansas City and Washington. Buffalo has struggled recently but its offense will return to form in Miami.
Jacob says:
The Bills have been struggling of late as a whole, and they've struggled on the road all year. With a very hard schedule for the rest of the year, I think their playoff hopes are almost done.
Molly says:
The Bills need a pick-me-up after last week, and the Dolphins are the perfect team to get a win against.

Langston says:
Though both of these teams have the same record, Cleveland has outscored its opponents by 48 points over the season, while Jacksonville has been outscored by 51.
Jacob says:
These two teams are alike in almost every way, but I think the Browns can win it in a close one.
Molly says:
The Jaguars' defense is good enough to grab a much needed win over the Browns.

Langston says:
Toss-up. I guess I'll give it to the Falcons at home.
Jacob says:
The injury to Matt Schaub has put the Titans in prime position to take the division, but first they will have to go through the stellar Falcons. The Falcons have been playing very well of late and every win is key in what will be a tight wild card race.
Molly says:
The Falcons are going to be home this week, and after going toe-to-toe with the Saints last week, they will stay pumped for this week's game.

Langston says:
Regardless of whether Darren McFadden returns for this week, Minnesota doesn't have enough talent to keep up with the Raiders, who will maintain first place in the AFC West.
Jacob says:
The Raiders are starting to put all the pieces together. Palmer is stepping it up, the backfield is stocked with great runners and the defense is not bad, either.
Molly says:
Carson Palmer is finally starting to look like himself again, and the Vikings' secondary is too banged up to help the team at all.

Langston says:
The Ravens must have left their game at home when they flew to Seattle last weekend. One would hope that a home game battle against a division rival for a shot at first place in the AFC North will be enough motivation for Flacco and company.
Jacob says:
On the long list of teams I am not sold on, the Bengals take the cake. Last week was their first real test of the year, and although they played it pretty close, they were definitely overmatched. The same will happen in Baltimore.
Molly says:
The Ravens are getting into a very bad habit this year, which is playing well against good teams and horribly against teams worse than them. As a Ravens fan this is incredibly disappointing, but I have faith in the Ravens this week that they will pull out the win this week.

Langston says:
Battle of the bottom-feeders! Seattle will ride last week's win over Baltimore into St. Louis on Sunday. The Seahawks will pull out the win, but it won't be pretty.
Jacob says:
Both teams are all but eliminated already, but the Seahawks have at least shown glimpses of mediocrity while the Rams have been just awful.
Molly says:
That win last week didn't mean anything for the Seahawks, so unless Tarvaris Jackson can actually play well two weeks in a row, Seattle doesn't stand a chance.

Langston says:
San Francisco is rolling right now; the Niners look like the legitimate second-place team in the NFC. Arizona, on the other hand, has played awfully in the weakest division in the NFL. I'll go with the 49ers.
Jacob says:
The 49ers have won seven in a row against several very good teams. They will be facing John Skelton, though, so it may be tough…
Molly says:
The 49ers are having an explosive season, and besides the Packers, the 49ers are the best team in the NFC.

Langston says:
San Diego has lost four in a row; Chicago has won four. Phillip Rivers will find his game in Chicago and both streaks will be snapped this weekend.
Jacob says:
The Chargers are terrible. The Bears have won four in a row. Go Bears.
Molly says:
The Bears' defense is on a roll right now; plus Chicago is just the better team in this matchup.

Langston says:
Philly will continue to keep Washington company at the bottom of the NFC East.
Jacob says:
I personally still believe in the Eagles as a serious team and potential playoff contender. The Giants, on the other hand, I consider as a great team and a playoff favorite. It will be close, but Vick is questionable so I will pick the G-Men.
Molly says:
Eli Manning is having an amazing season, and he is definitely one of the best quarterbacks in the league right now. Because Michael Vick is injured this week, I don't see any way the Eagles can pull out the win.

Langston says:
If Tebow can beat the Chiefs with just two completions, just imagine what Tom Brady will do to them.
Jacob says:
This could be one of the most lopsided Monday Night Football games of all time. That is, other than last week's Vikings-Packers showdown.
Molly says:
The Patriots are going to kill the Chiefs, especially since their starting quarterback is out for the season.