Lions and Bears on Monday night, oh my 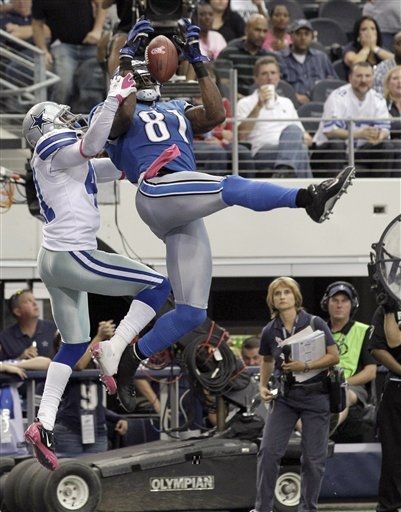 Photo: Calvin "Megatron" Johnson catches the game-winning touchdown for Detroit last Sunday. The Lions came back from down 24 to beat the Cowboys.

Photo: Calvin "Megatron" Johnson catches the game-winning touchdown for Detroit last Sunday. The Lions came back from down 24 to beat the Cowboys.

Week four was chock-full of storylines, from Andre Johnson going down, to Aaron Rodgers airing it out for 408 yards and four touchdowns (not to mention two on the ground), to the Lions and 49ers coming back to beat the Cowboys and Eagles, respectively.

As we gear up for another week of NFL action, let's check in on how our experts our doing. Jacob extended his lead last week, going 13-3. The rest of our panel is looking to bounce back in week five.

Eli says:
The Panthers are improving but they'll have a tough time against Drew Brees' offense.
Langston says:
It wouldn't be surprising if there are 700 combined passing yards in this game. Cam Newton has exhibited some serious talent so far, but the rest of the Panthers really haven't. Saints win on Sunday.
Jacob says:
The Saints' only loss of the season is to the undefeated Packers and they have wins against the stellar Bears and Texans. The offense is fifth in the NFL in points scored with an average of over 30 points a game.
Molly says:
Although both teams have solid quarterbacks, the Saints are by far the more consistent offensive team.

Eli says:
Both of these teams are struggling, but the Vikings are struggling just a bit more. I'll go with Arizona on the road.
Langston says:
Ugh, both of these teams are bad. Donovan McNabb should be feeling a sense of urgency – a Week five loss could easily cost him his job as starting QB – but I'm not sure whether this will push him to a win or mess with his head.
Jacob says:
It's time for Minnesota to win a game, and there is no better time to do so than against the Cardinals. The Vikings are bad, but the Cardinals are worse.
Molly says:
McNabb is having another tough season, and Beanie Wells is on fire recently.

Eli says:
With Andre Johnson out, Houston's passing game will suffer tremendously. McFadden runs wild on the Texan defense, and the Raiders improve to 3-2. Oakland wins this one for Al Davis.
Langston says:
Arian Foster of the Texans will get the better of the Raiders at home, but Darren McFadden will make his way into the highlights, too.
Jacob says:
Houston is my runaway pick to win the AFC South and while the Raiders will be in the hunt in the AFC West, they cannot keep up with the Texan offense.
Molly says:
Arian Foster had a spectacular game last week, and because Andre Johnson is hurt, Foster will get a lot of carries and deliver big again.

Eli says:
I guess I jumped on the Bills bandwagon a little too early, calling their Bengals matchup a "piece of cake" after having just beaten New England. The "super team" is 1-3 and last in the NFC East, but I have a feeling Philly will pull this one out.
Langston says:
While Philadelphia has, so far, spectacularly failed to live up to its preseason expectations, the men in Buffalo have easily surpassed theirs. Despite losing last week to an inferior Bengals team, the Bills can definitely play with anyone in the league. Philly, on the other hand, looks mediocre at best right now.
Jacob says:
The magic of Buffalo has finally ran out, but Philly has yet to play a good game leaving them at 1-3. It will be a shootout, but Fitzpatrick and the Bills will come out victorious.
Molly says:
This is a tough one, but my first instinct is to go with the Eagles. I feel like Michael Vick is still trying to prove himself this season, and hopefully his defense will support him.

Eli says:
Eli Manning isn't great, but he'll be able to pick apart a sorry Seattle D. Look for a big game out of Ahmad Bradshaw on the ground.
Langston says:
Seattle just doesn't have that much talent.
Jacob says:
The Giants look good at 3-1 and the Seahawks look terrible at 1-3. Last year's playoff stunners will not see any daylight in New York.
Molly says:
Eli Manning will destroy the sad Seahawks defense.

Eli says:
I honestly have no clue here. The Jaguars will have the best player on the field in Maurice Jones-Drew, so I'll take Jacksonville.
Langston says:
The Bengals managed to win in Buffalo last week, while the Jags lost again, falling to 1-3. Andy Dalton will follow up his strong road performance with another one in Jacksonville.
Jacob says:
Both teams have rookie QBs at the helm but the results have been very different. Andy Dalton and the Bengals have scored twice as many points this year than Blaine Gabbert and the Jags.
Molly says:
Since the Bengals have the number one ranked defense right now, it's likely they'll have no trouble fighting off the Jaguars.

Eli says:
Pittsburgh's 2-2 and have gotta break out at some point – week five against a soft 3-1 Titan team is the perfect opportunity.
Langston says:
Tennessee has been on a roll, but also has the fewest rushing yards in the league. This week, Matt Hasselbeck will face off against a team that leads the NFL in preventing the pass. Pittsburgh will bounce back from their week four loss with lockdown defense.
Jacob says:
Even though the records show otherwise, the Steelers are the favorite to win, especially at home. I'm going with the Titans, though, because the Steelers have played worse than their record shows.
Molly says:
Chris Johnson will lead his team to victory once again.

Eli says:
LaGarette Blount rushed for 127 yards and a score in a win over the Colts on Monday night. Expect more of the same against the Niners in week five.
Langston says:
Frank Gore will lead the ‘Niners to their fourth win in what will be a great NFC matchup.
Jacob says:
Josh Freeman is leading a good young team that will win in this deceptively good game. Both teams are 3-1, in first place in their division, with similar point differentials. The X factor is at QB for the Bucs. Tampa won't lose.
Molly says:
Jim Harbaugh, the 49ers coach, has helped San Francisco vastly improve since last year.

Eli says:
Brady only completed 16 passes last week yet still threw for 226 yards and two touchdowns. Meanwhile, the Jets fell to Baltimore 34-17 on Sunday night. Pats move to 4-1 on the year.
Langston says:
The Jets will really need to step up their offense if they want to compete with the Patriots, although this shouldn't be too difficult given that the Pats aren't great on the defensive end. This game, though, will lie in the arm of Tom Brady, and that's a good thing for Pats fans.
Jacob says:
Game of the week and I really wish I could say that the Jets will win. The fact is that they have no chance. The Patriots are a far better team and the Jets' overrated D will be trounced.
Molly says:
Mark Sanchez (who I consider one of the worst quarterbacks in the league) doesn't stand a chance against the Patriots' defense. New England has this one in the bag.

Eli says:
The Broncos took a beating from Green Bay in week four, losing 49-23 at Lambeau Field. The Chargers are playing well and Phillip Rivers is airing it out on a weekly basis. San Diego wins.
Langston says:
The Chargers haven't won on the road yet, but Denver's not a bad place to start.
Jacob says:
The Chargers feature a deadly offensive attack, balancing Phillip Rivers' excellence at quarterback with a strong running duo of Ryan Matthews and Mike Tolbert.
Molly says:
I don't have much to say about this game, except that the Chargers will out play the Broncos in this matchup.

Eli says:
Atlanta's defense gave up 28 points to the Seahawks last week. Imagine what the Falcons will give up to Green Bay.
Langston says:
This year's Falcons don't appear to be as talented as last year's, while the Packers have been every bit as good as the Super Bowl champions they were in 2010-11. Aaron Rodgers has been passing with extreme precision, and if he doesn't have any receivers open, he can always just run for two touchdowns like he did in week four.
Jacob says:
Another great game this week, but the undefeated Packers simply will not be stopped. Aaron Rodgers had the best game of his career in week four, tallying six touchdowns.
Molly says:
Aaron Rodgers…so yeah, another win for the Packers.

Eli says:
For the second straight week, the Lions came back from down 20 to stay undefeated. Calvin Johnson is a god, and Detroit will stay perfect.
Langston says:
After an incredible comeback in Dallas, it appears that nothing can stop the Lions.
Jacob says:
They are still 4-0 in Detroit after an incredible comeback against the Cowboys. The Bears are better than the Cowboys, but they will have to settle as the third best team in the division this year.
Molly says:
Matthew Stafford is having a great season and will out-play the Bears lagging defense.