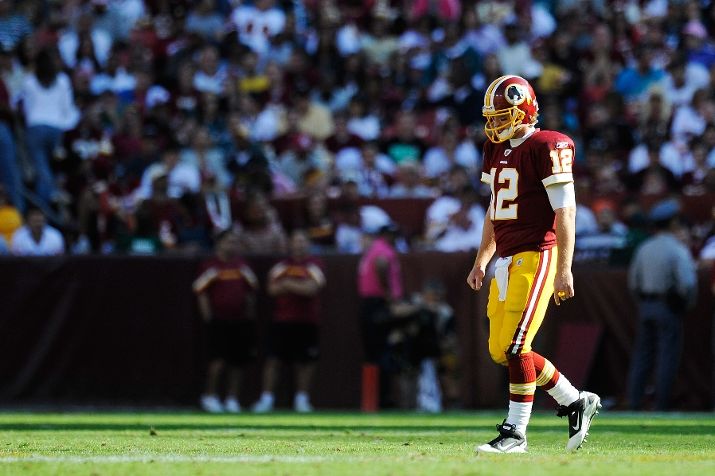 Photo: John Beck replaced a struggling Rex Grossman in week six. Will Beck lead the Redskins to the post-season or will he squander his starting job opportunity?

Photo: John Beck replaced a struggling Rex Grossman in week six. Will Beck lead the Redskins to the post-season or will he squander his starting job opportunity?

Quarterback change was the theme after week six in the NFL. Rex Grossman threw four picks against the Eagles, prompting Washington coach Mike Shanahan to insert John Beck into the lineup. Kyle Orton and Donovan McNabb were benched in Denver and Minnesota, respectively, to make way for young guns Tim Tebow and Christian Ponder. Meanwhile, the Raiders beat Cleveland 24-17 but lost QB Jason Campbell for the season with a broken collarbone. As a result, Oakland brought in veteran Carson Palmer from Cincinnati for a first round draft pick in 2012 and a conditional first-rounder in 2013. Let's see how all these QB shifts affect our SCO predictions in the coming weeks.

Eli, last year's champion, admits he's embarrassed to be in last place but is looking to turn things around this week. Jacob went 11-2 in week six, improving to 64-26 on the year and extending his lead.

Eli says:
San Diego is well-rested after the bye and the Chargers should come out strong. Look for Ryan Mathews to carry a heavy load and for Philip Rivers to throw for 200 yards and a couple of scores.
Langston says:
New York has managed a decent 3-3 start, but don't forget that two of their wins were over the Jaguars and Dolphins. The Jets won't be able to keep up with a San Diego team that earns nearly 120 more yards per game.
Jacob says:
The Chargers are off to one of their best starts in recent history at 4-1, but that number does not represent the way they've played. The defense has shown holes, Rivers is not playing nearly as well as expected and San Diego's special teams are just downright awful.
Molly says:
This is a toss-up, because in my honest expert opinion, either team could win since they both are having disappointing seasons. But my instincts tell me to go with the Chargers because I trust Phillip Rivers more than I trust Mark Sanchez.

Eli says:
Toss-up.
Langston says:
These two disappointing, 2-3 teams may not play good football, but this will be a great, evenly-matched, game. Browns win at home in a toss-up.
Jacob says:
These two teams are almost perfect equals. They have the same record at 2-3 and their point differentials are within two points of each other. The difference is the Seahawks pulled out a win against the Giants and lost by just two points to the Falcons. Meanwhile, the Browns have had one score wins against the Colts and the Bengals.
Molly says:
The Seahawks aren't horrible, and coming off a win against the Giants, their game seems to be turning around.

Eli says:
Detroit gets back on track thanks to big games from Matt Stafford and the Lion defense.
Langston says:
The Lions haven't lost at home yet, and they won't start this week.
Jacob says:
The Lions' undefeated season was ended last week at home against the 49ers, but a second home loss in a row is not about to happen.
Molly says:
The Lions are more impressive than the Falcons, offensively and defensively, right now.

Eli says:
Tampa Bay took down the Saints in week six, 26-20. The Bucs keep things rolling this week in a win over the 3-3 Bears.
Langston says:
Josh Freeman has had surprising success this year. After upsetting the Saints last week, he and the rest of the Buccaneers will ride their momentum to another win.
Jacob says:
I honestly can't explain why, but Chicago will pull it out.
Molly says:
With these two teams facing each other across the Pond, the Bears have an advantage with Devin Hester returning kicks and punts for touchdowns. Plus the Bears offense is looking more explosive than the Buccaneers right now. It could prove to be a close game though.

Eli says:
Both of these teams are awful. Tim Tebow is still an unknown entity; I'll take Denver in the hopes that he's still the player he was in college.
Langston says:
Miami gets a great chance to win its first game of the season, at home, against a struggling Broncos team. Tim Tebow will make the highlight reel and throw a couple interceptions in the process.
Jacob says:
Tebow time.
Molly says:
The Broncos are debuting Tim Tebow, the former unexpected first round draft pick, since Kyle Orton is disappointing fans around the country. Ironically enough, the game happens to be in Miami, where Orton was going to be traded. Tebow is going to be pumped and ready to impress.

Eli says:
Smh, Rex. Smh. John Beck and the Skins will bounce back with a win this Sunday. #GimmeThatBecky
Langston says:
Beck will have much lower expectations than Cam Newton did in his first start of the season. And for good reason; Beck's career passer rating is a measly 64.1 and he has played in just six regular season games over the past five years.
Jacob says:
The Redskins' fun is over. You can't replace one washed out QB with another. Newton is fresh and even the terrible Panthers' defense can hold the Redskins in check.
Molly says:
The Panthers are at home, which might give them an advantage. Plus, when the two offensives match up, I feel the Panthers will simply out-play the Redskins. Cam Newton will probably be running all over the Redskin defense.

Eli says:
Houston has struggled without the playmaking ability of Andre Johnson. If Arian Foster gets 20+ carries, the Texans should still be able to outscore the Titans.
Langston says:
Game of the week. The Texans and Titans face off for first place in the AFC South. The Titans will be nice and rested, but this will be less beneficial than the bad taste that Baltimore left in the mouths of the Texans. Houston will roll into Nashville ready to fight.
Jacob says:
These two teams have proven to be the only ones in the race for the division, and this matchup could be a preview for who is to come out on top. I'm going with the Texans who have played the Saints, the Ravens and the Steelers and come out with a .500 record. The Titans need to show an increased level of consistency before I can start picking them.
Molly says:
Chris Johnson always plays really well against the Texans, and it makes it a little bit easier for him to come out of his shell without Mario Williams breathing down his throat.

Eli says:
It's clear which team is better in this rematch of Super Bowl XLIII. Mike Tomlin's Steelers have won two straight and will take their momentum into Arizona in week seven.
Langston says:
With a solid offense and the NFL's best defense, Pittsburgh won't be bothered by the Arizona Songbirds.
Jacob says:
Pittsburgh has been nearly as disappointing as the Jets and the Eagles, but they can only go up from here. Plus they're playing the Cardinals, so…
Molly says:
I'm only going to go with the Steelers because they are a safer pick with their tight defense and their weapons on offense. Even though Pittsburgh isn't doing so hot this season, I've got to go with the safer pick here.

Eli says:
Jeez, Jason Campbell can't catch a break. After being chased out of Washington, he finally solidified himself as Oakland's quarterback this season, playing well through five weeks. Then came Sunday. A broken collarbone paired with the Carson Palmer trade leave Campbell's future uncertain once again. Palmer is supposed to start on Sunday, so I'll go with Oakland at home over Kansas City.
Langston says:
Have the Chiefs' two consecutive wins turned their season around? Nope. Oakland wins at home.
Jacob says:
The Raiders are my pick to win the AFC West and the Chiefs are my pick to finish last in the division. The Carson Palmer trade can be a big step up for Oakland.
Molly says:
The Raiders just got Carson Palmer, and there's no way he can be in sync with the offense yet. Meanwhile, Matt Cassel has been working with his receivers for almost two years now.

Eli says:
Ponder FTW?? Nah, not this time. Green Bay stays undefeated against a brutal Minnesota squad.
Langston says:
If I had to pick the team which was most likely to hand the Packers their first loss of the year, it sure wouldn't be the Vikings. Aaron Rodgers will dominate, again, but I am excited to see what Christian Ponder has to offer for Minnesota.
Jacob says:
St. Louis last week, Minnesota this week, it can't get much easier for the Packers.
Molly says:
The Packers are on fire, and the only way they can lose this game is if they underestimate the Vikings.

Eli says:
Always hate to pick the Cowboys, but the Rams are just plain bad.
Langston says:
With three losses by four or fewer points, Dallas has played better than its record indicates. Losing on a great Tom Brady drive, as the Cowboys did in Week 6, certainly isn't an experience limited to bad teams. The Cowboys will figure it out.
Jacob says:
Brandon Lloyd can make an impact in St. Louis but the receiving corps is not fully to blame. Bradford will have to step up big time if they can beat the 'Boys at home.
Molly says:
UPSET PICK OF THE WEEK. The Rams just picked up Brandon Lloyd from the Broncos, where he played amazingly well under Josh McDaniels – now the offensive coordinator for the Rams. Sure, the Cowboys came close to beating the Patriots, but they've come close to beating a lot of good teams. The Rams are going to take charge.

Eli says:
At this point, it's a guaranteed win for anyone playing the Colts. Saints improve to 5-2 on the season.
Langston says:
Sorry, Indy. Not this week.
Jacob says:
A rematch of one of the best super bowls in recent history, but this time there is no Peyton for Indy. Saints in a blowout.
Molly says:
I mean it's the Colts. This would just be sad if the Saints lost. I feel bad for the Colts…okay I'm over it. Hopefully Drew Brees will stop throwing picks this week.

Eli says:
Ray Rice gets it going on the ground and the Ravens roll.
Langston says:
Monday Night massacre in Jacksonville.
Jacob says:
There is only one team better than the Ravens so far, and that's the Packers, not the Jaguars. Why this game is on Monday Night Football, I don't know, but Blaine Gabbert will be eaten alive by the Ravens D.
Molly says:
This kind of seems like a waste for a Monday night game, since the Ravens are about to go into crush mode.