So much for the "dream team" 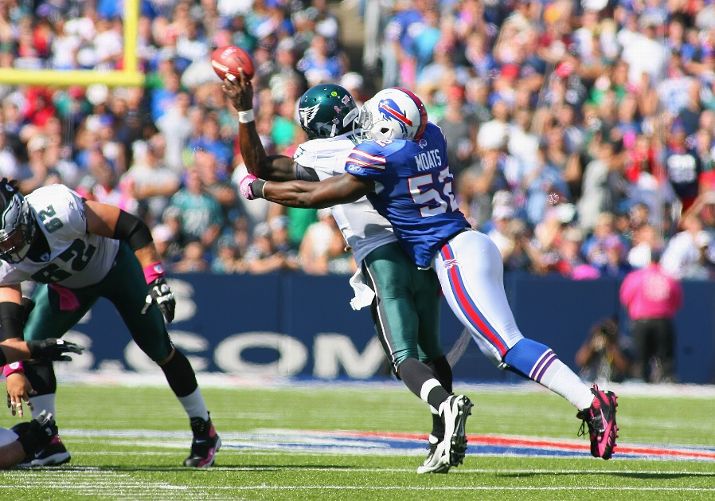 Photo: Philadelphia hasn't lived up to the hype. The so-called "dream team" is just 1-4. The Eagles face the Redskins on Sunday afternoon at Fedex Field.

Photo: Philadelphia hasn't lived up to the hype. The so-called "dream team" is just 1-4. The Eagles face the Redskins on Sunday afternoon at Fedex Field.

So much for the "dream team" in Philly. The Eagles haven't lived up to high pre-season expectations, dropping four straight after beating the Rams in week one. Meanwhile, the Lions are 5-0 for the first time since 1956, and Calvin Johnson is playing out of his mind with nine receiving touchdowns through five games. In Oakland, things are looking up following a 25-20 win over Houston at Reliant Stadium just a day after the sad death of long-time owner Al Davis.

Jacob has a close lead in the standings over the rest of our experts; let's see what week six has to offer.

Eli says:
Upset of the week. People were big on the Falcons prior to the start of the season, but they've had a slow start to the season at just 2-3. Atlanta's D is playing awful, which means Cam Newton should have another huge game. Carolina came close to beating the Saints in week five, losing 30-27. The Panthers will have better luck this week and improve to 2-4 on the year.
Langston says:
Atlanta has been a disappointment so far, starting the season just 2-3 and allowing 25 unanswered points to the Packers last week. On the other hand, although Cam Newton has been racking up yardage at a historic level, he's also thrown six interceptions in five games. Though Atlanta may be in a slump, this team still has more than enough talent to take care of the Panthers.
Jacob says:
Neither team has been good, but Carolina has come very close to victory in recent weeks and this time they will pull it out.
Molly says:
This is a tough game to call, but the Panthers seem committed to every game so far, and they're bound to win sometime…right?

Eli says:
It blows my mind that the Eagles are favored in this game. Check the records, people. It's been a year since the 59-28 debacle that went down in DC. Fat Albert is gone, and the Skins defense is much improved. Michael Vick is playing terribly. Washington wins.
Langston says:
The Nightmare Team come to DC to face a rested Washington. Maybe the Eagles will figure it out next year.
Jacob says:
A season's disappointment in Philly against a pleasant surprise in Washington – but in week six, order will be restored in the NFC East.
Molly says:
When you stack these teams' records next to each other it's more likely the Redskins will win. Michael Vick is a strong quarterback, but with all the interceptions he's been throwing paired with the lack of an offensive line, it doesn't seem likely that the Eagles will win.

Eli says:
5-0 vs. 0-4. Hmm... Tough decision. I'll go with the Packers.
Langston says:
Aaron Rodgers lights it up and both teams continue their respective streaks.
Jacob says:
The Packers are 5-0 and who's going to stop them? Definitely not the 0-4 Rams.
Molly says:
Aaron Rodgers.

Eli says:
Big Ben threw five touchdowns against the Titans last week, as Pittsburgh cruised to a 38-17 win. Meanwhile, the Jags lost to a mediocre Bengal team. I'll go with the Steelers at Heinz Field.
Langston says:
Pittsburgh's defense continues to foil running backs, as the Steelers held Chris Johnson and Tennessee to just 66 rushing yards in week five. It looks like Jacksonville's relying on the arm of the amazing Blaine Gabbert. Uh-oh
Jacob says:
The Steelers played well in a commanding win over Tennessee at home. They'll continue their winning ways in another home game against an AFC South team. There should be no problems in Pitt.
Molly says:
The Steelers need to pick up the pace if they want to be in the run for the Super Bowl this year, and Jacksonville is the perfect team to play for an ego boost.

Eli says:
Okay, the Bills must be for real. I haven't taken them seriously the past few weeks, and they've proven me wrong with wins over the Patriots and Eagles. The G-Men fell to the Seahawks (yikes!) last week and they'll struggle again this Sunday.
Langston says:
In what will be the only road victory in the NFL this week, Ryan Fitzpatrick will lead the Bills past their second consecutive NFC East team.
Jacob says:
Regardless of what their record says, the Bills just aren't that good. Both teams have good offenses and mediocre defenses, so expect a shootout in the Meadowlands.
Molly says:
The Bills are on fire this season, and the Giants couldn't even compete against the Seahawks.

Eli says:
The Colts can't stay winless forever, right? Curtis Painter FTW!
Langston says:
The Colts' squandering of an early 17-0 lead at home to lose to the Chiefs makes a strong case for their chance to go winless this season, barring a late-season Manning return. Cincinnati, however, has won two in a row, one of which was over the Buffalo Bills. Andy Dalton's holding his own in his rookie season.
Jacob says:
Indy without Peyton Manning is just sad. The Colts have only scored 87 points on the season and their defense has been of no help either, giving up the third most points (136) in the NFL.
Molly says:
Since the Bengals have the number one ranked defense right now, it's not likely they'll have any trouble fighting off Indy.

Eli says:
When's the last time Detroit was 5-0 to start a season? I'd just like to point out that I saw this coming all along – check out what I said about the Lions in week one. Matt Stafford and Megatron keep rolling in the Motor City.
Langston says:
As the two newest NFL powerhouses square off in Detroit, the 49ers will be without key receiver Joshua Morgan, making Frank Gore's performance critical. Though Gore's play has improved dramatically over the past two weeks, he should be limited by the Lions' tough defensive line. Even an average night for Stafford and Megatron should be enough for the Lions to win at home.
Jacob says:
This might be the game of the week. The Lions are 5-0 for the first time since 1956, but the underrated 49ers are playing just as well. This one is going to San Francisco.
Molly says:
This is a close match-up, but the Lions are playing a little bit better than the 49ers are right now, and that should give them the edge.

Eli says:
The Raiders are coming off a 25-20 win over the Texans. They'll ride that momentum in week six and beat the 2-2 Browns.
Langston says:
Cleveland has the best record in the NFL among teams that are in last place in their division. That doesn't really matter much, though, because Darren McFadden will run all over the Browns and their 25th-ranked run defense.
Jacob says:
The Raiders can score, the Browns can't. The Browns can defend, the Raiders can't. The offensive-minded Raiders will come out on top with a great game from Darren McFadden.
Molly says:
Darrius Heyward-Bay seems to be breaking out this season with Jason Campbell at quarterback. Look for these two to make a lot of connections during this game.

Eli says:
Like I predicted, Houston's offense took a nosedive without stud receiver Andre Johnson in the lineup. Johnson's still out with a hamstring injury, and the Texans will have to rely on Arian Foster. The Ravens are terrific at stopping the run. Offensively, Baltimore has scored 132 points through four games. The Ravens drop 30 on Houston at home and improve to 4-1.
Langston says:
Close one, but the Ravens have won eight of their last nine post-bye-week games.
Jacob says:
Both teams are on top of their games and their divisions. The Ravens are just a little bit better thanks to the ruthless D that has given up the fewest points in the league.
Molly says:
Off a bye week, the Ravens are ready to go! DREAM TEAM!

Eli says:
Through five games in 2011, Drew Brees has been, well, Drew Brees. He threw for 359 yards and two scores last week and shouldn't have any problem repeating against the Bucs D. Meanwhile, Tampa Bay's 3-2 record is misleading – they've struggled mightily at times. LaGarette Blount is out this week, so the running back duties fall to veteran Earnest Graham. New Orleans wins big.
Langston says:
Upset alert! Josh Freeman and the Buccaneers protect their house and join the Saints atop the NFC South.
Jacob says:
The Saints nearly beat the Packers in week one and haven't lost since. The Bucs have been very inconsistent with a record that does not reflect their sub-par performance.
Molly says:
The Saints are just the better team.

Eli says:
The line is New England by seven. I don't think it'll be that close. The Pats score 40+ in Foxborough and Dallas falls to 2-3 on the season.
Langston says:
Tom Brady's playing, right?
Jacob says:
Brady to Welker is an unstoppable duo. Plus, regardless of how well the Patriots play, the Cowboys will find a way to lose.
Molly says:
Dallas doesn't have the defensive skills to stop Tom Brady. Plus, it doesn't exactly help a team to have Tony Romo at QB.

Eli says:
Jay Cutler played well on Monday night considering he had zero help from his offensive line. Matt Forte was exceptional as always, rushing for 116 yards on 22 carries and playing a significant role in the pass game. The Vikings are 1-4 and have looked, for the most part, pretty terrible – Adrian Peterson is a lone bright spot. Chicago bounces back from a week five loss to Detroit with a win over division rival Minnesota.
Langston says:
Adrian Peterson will play well, but until Donovan McNabb figures out how to make an accurate pass (or head coach Leslie Frazier decides to start backup Christian Ponder), Minnesota will have a significant disadvantage.
Jacob says:
Donovan McNabb should no longer be an NFL quarterback. Jay Cutler isn't that good either, but the Bears' defense will bottle up the Viking offense.
Molly says:
The Vikings may have gotten their first win last week (way to beat the Cardinals, guys!), but they are not on the same level as the Bears. Chicago takes this one.

Eli says:
"I'll probably get kicked out after the second quarter...The quarter-and-a-half I'm out there, I'm going to play like a monster. I might get into a fight with Bart Scott…We'll see.” Yeah, ok Brandon. Let's see how that works out for you.
Langston says:
This is a must-win for the Jets; New York cannot afford to start 2-4 and then try to regain ground against the Bills and Patriots.
Jacob says:
The Jets have been really bad – they're almost as disappointing as the Eagles so far. Miami is worse.
Molly says:
Since Chad Henne is out for the season, and the Jets have a killer defense, the Dolphins don't stand a chance.