With Sam widening his lead on the field, our experts are all looking to catch up with their picks in Week 6. In a tight race for second place, Sasha has now passed Bobby. Let's look at our expert's picks this week.

Sam says: Although the Texans defense looked great against Dallas last week and Arian Foster seems to be back healthy, they simply cannot pass the ball with QB Ryan Fitzpatrick and that will keep the behind Andrew Luck and the Colts.
Bobby says: The Colts looked solid last week against the Ravens, and they should continue to roll this week against Texas. But Andrew Luck better watch out for J.J. Watt.
Sasha says: The Texans only threat is their defense right now. Arian Foster is a star but they can't just rely on their running game.
Romalia says: After awarding honorary captaincy of the team to a David Quessenberry, a chemotherapy patient and avid Texans supporter, the Texans will be fully energized at home to defeat a division rival. This is a huge game for the Texans season and I believe this sense of urgency will propel them to a win.

Sam says: The Jaguars suck really need to improve, and it starts with their running game offensively.
Bobby says: If the Jaguars are going to get a win this season, their best chances are in this game. It would be an upset, but the Titans aren't. Blake Bortles leads Jacksonville to his first career win.
Sasha says: The Jags are the laughing stock of football. The Titans might be bad but they're not that bad.
Romalia says: I thought the Jaguars had more in them but they proved me wrong once again this season. Unfortunately the future looks dark for Jaguars fans and the suffering will continue against the Titans.

Sam says: I like the Bucs at home in this matchup, the Ravens O-Line struggled against the Colts last week and face a mean Bucs defense this week.
Bobby says: Joe Flacco had a rough week in Indianapolis, but he should bounce back this week against a weak Tampa Bay team. It will be interesting to see how the Ravens use their trio of running backs to their advantage.
Sasha says: Joe Flacco will have a career game against a horrible pass defense in Tampa.
Romalia says: Against the Buccaneers, a team who is not even close to the same level as Indianapolis, the Ravens will thrive and stride to a win.

Sam says: The Jets are becoming one of those teams that you can consistently count on to score few to no points each week.
Bobby says: The Jets' secondary defense is going to be overmatched and outplayed by Peyton Manning and his numerous targets. Demaryius Thomas had a monster game last week, and could easily have another one in this game.
Sasha says: Chris Ivory has looked like the force the Jets needed in their running game. The Jets will upset the Broncos at home.
Romalia says: The Jets have not been impressive this season and the Broncos with their high powered offense should steamroll them over.

Sam says: Even without Calvin Johnson catching passes, the Lions offense has many dimensions and can go for a lot of yards today. The Vikings are steadily missing Adrian Peterson more and more in their depleting offense.
Bobby says: Calvin Johnson, or nah. Look for a healthy Golden Tate to be Stafford's primary target this week in Minneapolis. Tate obviously, isn't as good as Megatron, so expect Detroit to focus more on the running game.
Sasha says: The Lions defense is one of football's best, and it will show against the Vikings.
Romalia says: The Vikings did not perform last week and this will continue, as they are surrounded by the Adrian Peterson controversy. The Lions will win this one.

Sam says: Tom Brady does not lose to the Bills, except twice.
Bobby says: The Patriots proved me wrong last week, so I'll take them this time around. They did look very impressive last week against a strong Bengals defense, so they shouldn't have any trouble winning this game.
Sasha says: Every week I think the Tom Brady's going to bounce back with a good game but every week he disappoints. I see a continuation of disappointment this week as the Bills take this one.
Romalia says: Although the Patriots won last week, they have been inconsistent this year. I see the Bills upsetting Tom Brady and pulling out a win.

Sam says: At home, and coming off easily their worst game of the season, the Bengals take a win at home against Carolina even without WRs AJ Green and Marvin Jones.
Bobby says: The Bengals' defense is one of the best in the league, but the Patriots proved last week that it does have holes. Look for Kelvin Benjamin to expose those holes and roll over Cincinnati.
Sasha says: Dalton and the Bengals will put on a show this week and take down Carolina at home.
Romalia says: Cam Newton vs. Andy Dalton. This game can be defined by that matchup and in that matchup there is only one bum, Andy Dalton. Without AJ Green, Dalton will not get away with crappy throws and the Bengals will lose.

Sam says: With an improved secondary and consistent pressure from All-Pro Cameron Wake, the Dolphins defense will surprise in this upset at home.
Bobby says: Eddie Lacy is starting to get on track, which is all the more reason for the Packers to continue to improve. The Dolphins looked good early in the year, but have struggled as of late.
Sasha says: It looks like Rogers, Lacy, and the Packers have found their stride and look to continue it this week and pick up and easy win against Miami.
Romalia says: With the home crowd to support them and playing against a Packers team that is not as strong as in recent memories, the Dolphins will win this one at home.

Sam says: This should be a bigtime blowout with Rivers playing so well.
Bobby says: Philip Rivers is hot, and is going to steamroll over Oakland. The Raiders are the laughing stock of the league.
Sasha says: Even though they've lost three centers and a pair of running backs this season, the Chargers keep finding ways to win with a healthy and strong Philip Rivers. Look to see this trend continue against a weak Raiders squad.
Romalia says: The Raiders are terrible and against a hot P-riv, the Chargers will cruise to victory.

Sam says: In what is a must-win game for the Bears to stay on pace in the NFC North, I like them to beat the Falcons with their arsenal of offensive weapons.
Bobby says: Matt Ryan vs. Jay Cutler and Julio Jones vs. Brandon Marshall make the game evenly matched. The difference maker, running back, Matt Forte had a big game last week and could do it again this week.
Sasha says: The Falcons have one of the top 5 offenses in the league. They will flourish against a defense that consistently sits in the bottom of the rankings.
Romalia says: The Falcons are the model of inconsistency, starting off the season defeating the Saints, then alternating between winning and losing. The Falcons problem is that they are a team built for shootouts but can't get consistent offense to win these shootouts. Against the Bears a shootout will work in favor of the Falcons.

Sam says: The Seahawks just don't lose at home, best home-field advantage in football.
Bobby says: DeMarco Murray has been off to a great start this year, but it stops in this game. The Seahawks defense at home shut down Montee Ball earlier in the year, and will shut down Murray and the Cowboys in this game.
Sasha says: The Cowboys won't know what to do with themselves in this hostile environment. Add on the fact that the Seahawks have the best combination of offensive and defensive power; there is no way the Cowboys pull out a W.
Romalia says: The Cowboys have impressed in recent weeks but against the Seahawks they do not have a chance. In Seattle with the crowd going crazy, the Cowboys will lose. 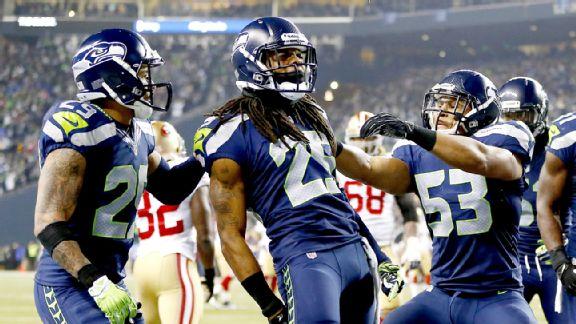 Photo: Richard Sherman and the Seahawks defense is looking for a statement home victory this week against the Cowboys

Photo: Richard Sherman and the Seahawks defense is looking for a statement home victory this week against the Cowboys

Sam says: The Redskins offense is looking worse and worse over recent weeks, also Arizona is among the toughest places to play.
Bobby says: Even with RB Andre Ellington injured, the Cardinals have enough offensive weapons to win this game.
Sasha says: Cousins will silence his haters in Arizona this week with a performance similar to the dominating ones against Jacksonville and Philadelphia.
Romalia says: The Redskins look terrible. They have no quarterback and their defence is not much better. Against the Cardinals, all of the Redskins weaknesses will be shown as they will lose.

Sam says: Even though their offense has not looked good, their defense and special teams have carried the team.
Bobby says: The Giants are from New York, which is bigger and better than Philadelphia.
Sasha says: The Giants look like they've found their stride with receivers like Rueben Randle and Victor Cruz stepping up in the big situation. The win against a hot Washington squad really turned things around for New York.
Romalia says: The Eagles will win this divisional game and put the Giants recent hot streak to an end. Expect an exciting game.

Sam says: Austin Davis looked good last week, but faces a much better team defense in San Francisco.
Bobby says: San Francisco is in California, at home they will win.
Sasha says: Even though the 49ers say they are going to give Gore less action this week, this doesn't mean a loss for San Francisco. Look for Kaepernick to show on the road as they rely more heavily on the passing game.
Romalia says: The Rams are a team that are leagues from the 49ers and that will be evident when they get pounded at home.