Which teams will come up big over the holidays? 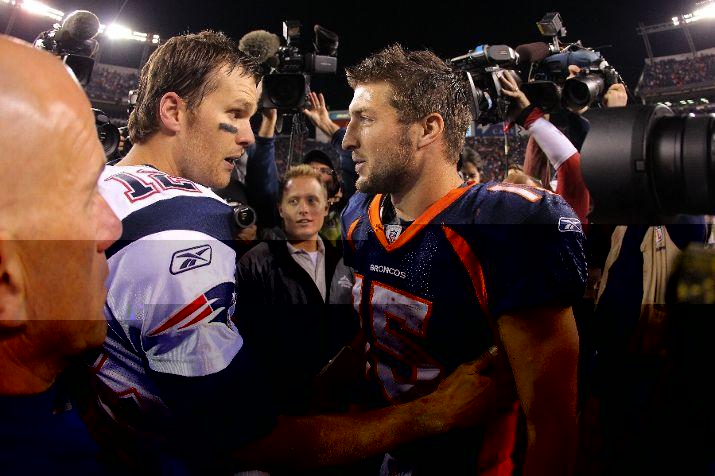 Ho, ho, ho (SCO, SCO, SCO?) Happy holidays, football fans! Get hyped for 13 NFL games on Christmas Eve. The season is coming to an end, but there remains plenty of pigskin to be played!

Last week, the Patriots knocked off the mighty Tim Tebow. I guess he's human after all…

Eli says:
Indianapolis unwrapped its present early this year, finally getting a win after weeks and weeks of suffering. Why can't they do it again? Orlovsky FTW!
Langston says:
Though the players understandably won't buy into this, the Colts need to lose the rest of their games. They need some serious Luck for next season.
Jacob says:
It's nice for the Colts to finally get that win, but it is likely the only one of the year. Houston has the division clinched, but they're still fighting for seeding, and TJ Yates can come off a bad loss with an easy win in Indy.
Molly says:
I'm going to give the Colts the benefit of the doubt and say they can pull out another win.

Eli says:
If you can beat Tebow, you can beat anybody, right?
Langston says:
The Patriots are on top of the conference after a big win against the Broncos. The Dolphins, meanwhile, are fighting for respectability, which would be achieved by a hard fought win against New England. Realistically, it's not going to happen.
Jacob says:
The Patriots, with their NFL-worst passing defense, have still won six in a row.
Molly says:
As a Ravens fan at this time, I'm going with anyone playing the Patriots.

Eli says:
The Titans just lost to the… Colts???
Langston says:
The Jaguars remain awful. Tennessee gets this one at home.
Jacob says:
The Titans are still hanging in there but the loss to the Colts was a big hit to their playoff chances. Coach Mike Munchak has named Hasselbeck the starter for at least one more week as they try to make a final playoff push. A win against Jacksonville is to be expected but Tennessee needs the Jets to lose for them to have a chance.
Molly says:
The Jaguars offense is really a one-man show, so the Titans will take the win easily.

Eli says:
The Giants looked awful against Washington in week fifteen. The Jets didn't look too hot, either, but I'm trusting Mark Sanchez & co. to get the job done.
Langston says:
The Giants have lost five of six, while the Jets have won three of their last four. The G-Men will struggle to make the playoffs if they keep playing the way they are now.
Jacob says:
The Giants are on a slide that has them falling out of playoff contention. They have lost five of six including a 13-point loss to the Redskins. The Jets aren't so hot themselves, but they should pull it out against their fellow New Yorkers.
Molly says:
The match-up of the New York teams will hopefully not leave the state in chaos, especially when the Giants win because of their far better offense.

Eli says:
Cam Newt Gingrich for President.
Langston says:
Cam Newton will drop another forty or so fantasy points and the Panthers will take this one at home.
Jacob says:
The Panthers have been playing very well recently and their 19-point win over the Bucs is only three weeks old. They will fare just as well this time against the Bucs who are in the midst of an eight-game losing streak.
Molly says:
Carolina looks explosive this season, and the Buccaneers aren't very good...to put it nicely.

Eli says:
Big Ben's out, but the Rams are, well, uhh... yeah.
Langston says:
The Rams have more of a chance than they would otherwise, due to Ben Roethlisberger's injury, but the Pittsburgh defense will still be at full strength.
Jacob says:
The Rams have played about as well as the Colts this year. They are 2-12 and their -180 point differential is only four better than that of the Colts. The Steelers are tied with the Ravens on top of the division.
Molly says:
The Ravens are hoping for a loss from the Steelers last week, but I don't think they will let it happen two weeks in a row, especially against the Rams.

Eli says:
I'm hesitant to take the Ravens against a bad Cleveland team, because B-More has played terribly against lesser squads throughout the entire season. But I don't foresee an upset on Christmas Eve. Ravens win.
Langston says:
Just when we decide the Ravens are the best team in the AFC, they go and lose again. Cleveland shouldn't pose much of a threat, though, and Baltimore is still undefeated at home.
Jacob says:
The Ravens got smashed by the Chargers in week 15, but they are still undefeated at home. An easy win against the Browns will make it a perfect season at M Bank Park for Baltimore.
Molly says:
The Ravens have definitely made some major adjustments after last week, but they know what is at stake and will deliver.

Eli says:
I flipped a coin. Seriously.
Langston says:
Wait, Arizona's 7-7? When did that happen? The Cards will continue their winning ways in Cincinnati.
Jacob says:
Eleven of the Cardinals' games this year have been decided by one score and they have now won six of their last seven. The Cardinals have done so well recently that they are now an outside shot for a wild card spot.
Molly says:
The Bengals are just a better team.

Eli says:
You can actually make money by attending this game at FedEx field. That's how unimportant this match-up is.
Langston says:
Washington pulled out the win last week, even with Roy Helu having a sub-par game. This week, he'll bounce back and the Redskins will take care of Minnesota.
Jacob says:
The Vikings haven't won since their week eight bye week. Since then, rookie quarterback Christian Ponder has only had two games with passer ratings above 64. The 'Skins are coming off a good defensive showing against the Giants and they can tear up the Vikings offense.
Molly says:
The Vikings secondary doesn't stand a chance against the recently on fire Redskins.

Eli says:
Tebow and the Broncos were brought back down to earth last week in a big loss to the Patriots. It won't be pretty, but Buffalo should take care of Denver at home.
Langston says:
Tim Tebow has not lost back-to-back games all year, and he won't start now.
Jacob says:
As predicted, the Broncos stood no chance against the Patriots. Brady still is a better quarterback than Tebow as are many other NFL quarterbacks. Ryan Fitzpatrick is not one of them. The Broncos need a win and an Oakland loss or just two wins to clinch the division. In all likelihood, they will make the playoffs, but no one really knows where they can go from there.
Molly says:
TEBOW TIME! Plus, sprinkle in a little McGahee and you've got yourself a nasty little cocktail.

Eli says:
Kansas City just knocked off Green Bay. The Chiefs should carry that momentum into Saturday's match-up with Oakland.
Langston says:
The Chiefs legitimately outplayed Green Bay last week, and Oakland has lost three in a row. The AFC West is officially up for grabs.
Jacob says:
The Chiefs beat the Packers. I have no idea how, but they did.
Molly says:
The Chiefs definitely proved themselves this week, and their defense is guaranteed to shut down the Raiders.

Eli says:
Matt Stafford threw for nearly 400 yards and four touchdowns to lead his team to a one-point victory over Oakland in week fifteen. Meanwhile, the Chargers put a beatdown on Baltimore. I'll go with San Diego.
Langston says:
San Diego's roll will stop in Detroit. The Lions will protect their house as they go for a wild card bid.
Jacob says:
The Chargers absolutely smashed the Ravens last week and the Lions will fare similarly. San Diego has beaten opponents by a combined score of 71 points in the last three weeks as they have put themselves back into the playoff race.
Molly says:
This will be a close game, but the Lions have home field advantage, and they tend to be more consistent.

Eli says:
Philadelphia is on a roll, and they play pretty well on the road. Tony Romo has yet to solidify himself as a reliable QB. Eagles win.
Langston says:
Somehow, the Eagles will find a way to make the playoffs. Just 'cause the NFL is like that.
Jacob says:
The Eagles are still alive. With a win here a Giants loss this week and a Giants win next week, the Eagles will win the division. That would involve a lot of things happening but it is not implausible. Look for the healthy Eagles to win big.
Molly says:
The Eagles beat the Cowboys in their first match-up, and they're going to do it again thanks to an improved defense.

Eli says:
Upset city baby. Seattle keeps on rolling.
Langston says:
The 49ers are the best team in the NFC outside of Green Bay. If they can handle the Steelers, the Seahawks don't have much of a chance.
Jacob says:
The 49ers looked shaky two weeks ago against Arizona but they won big against Pittsburgh on Monday Night. If they can win out, the 49ers will have a bye the first week of the playoffs.
Molly says:
The 49ers had an amazing win last week, and if everything goes as planned, then they will blow the Seahawks out of the water.

Eli says:
The Pack lost once, and Aaron Rodgers won't let it happen again. Plus, Caleb Hanie is downright putrid at QB for the Bears.
Langston says:
It was only a matter of time before the Pack finally lost a game, but no one expected it to be to the Chiefs. They'll figure out whatever their problems were in time for this NFC North matchup.
Jacob says:
The Packers lost to the Chiefs for some inconceivable reason. It had to happen to bring them down to earth, and now the Pack is ready to go.
Molly says:
I don't think the Bears will be as lucky as the Chiefs were.

Eli says:
Drew Brees' statline from week fifteen: 32-40, 412 yards, five touchdowns. Goon.
Langston says:
Could Drew Brees throw for another five touchdowns? Yeah, he could.
Jacob says:
Drew Brees is having a historic season. He is likely to break Dan Marino's record this week and then still have one more game to go. He is completing seventy percent of his passes and his touchdown to interception rate is incredible. Saints can go all the way.
Molly says:
Drew Brees is good at finding his receivers and making plays in the red zone. The Saints have this one.